Marie Colvin: Is a false narrative being created to justify an attack on Syria?

After you read this post, check out the latest on Marie Colvin, a tidy ending to a messy story.

I have been following along with the reported death of the journalist Marie Colvin in Homs for the past couple of hours. I find some huge, huge problems with the story.
Early this am, the narrative was that a video was released by the "oppostion" really terrorists in Homs.The claim that this journalist was killed by the Syrian military originated with them.
And just prior to her alleged death, she gave some very interesting interviews making some very
spurious claims.
My gut tells me that something is off on this whole story. Like Jessica Lynch. Or the Saddam statue being pulled down. Or Pat Tillman. We should all understand that false narratives can easily be created then morph through the media into something “pivotal”.
So here are my issues with this whole story
First: this narrative has entirely originated with the “opposition”
For nearly a year, covering the Syrian destabilization, the words emanating from the “oppostion” have almost always been far from fact . Far from fact!


Second: I have never heard of this woman, ever before.
I have covered a lot of the same news that she has. And never came across her reporting. How on earth is that possible? Until today, had anyone else recalled seeing her in Egypt, most recently? With the more then 100 posts on Syria, I am absolutely flummoxed, that her "reporting” had not crossed my path of sleuthing.

Third:
This morning I looked at her Wikipedia page. There was almost nothing there. As of this time 10:00 am est it has gotten bigger. But, I want you to pay attention to when this page was created? Everything on it is from today. February 22/2012
Yet, We are told she was a journalist for two decades, it is reported she won prestigious awards in 2010 and 2000 and 2001. Yet wikipedia had nothing on her, until today.. Marie Colvin had never been on Wikipedia prior to today? As celebrated as we are being told she was?
From the page as it is right now


Am I the only one that finds it odd a so called “prestigious” foreign correspondent, never garnered a previous mention on Wikipedia?

Fourth: Marie Colvin is supposed to be an American, working for the British press and yet it was the French government who confirmed her death? But even that early reporting is disappearing.
French Minister: French journalist killed in Syria was the original headline to this news story

In the body of the story the info is still present

Fifth: I see a number of stories around that report the deaths of the journalists CANNOT be confirmed.

A Syrian activists said two foreign journalists were killed Wednesday by Syrian government forces shelling the restive central city of Homs. The report could not be immediately confirmed.

NewsCorp- She worked for Rupert Murdoch! That says a lot. If the deaths are unconfirmed why is the media reporting them as fact? Wouldn't this be difficult for the families?

Sixth:
Curiously just a few hours before her death, she managed to give an interview to CNN?
Her story is picked up all over the place. Then she was killed.
In the interview she tells the world how she witnessed the death of a baby.
I am going to quote from the interview

Anderson Cooper: Do we know how the child died? How he was wounded?

Marie Colvin: We know there's been constant shelling in the city, so I have to say, it's just one of many stories. His house was hit by a shell. He -- another member of his family -- it's chaos here, but another member of his family arrived later, but after he had died, and said the house had been -- the second floor -- had been hit. This little boy, obviously it was just one piece of shrapnel that caught him right in the chest.

Notice anything odd about that answer?
She doesn’t know how the child died. She assumes it was the “constant shelling”
But she doesn’t know. Then she talks about another member of the family arriving after the baby died and telling her the house had been hit. Why does she not mention the family members who were actually present at the time this was supposed to have taken place? Where are they? How are they? No mention of that.
Later she mentions the “Free Syrian Army” is on the streets and armed. How can she be so sure it was not one of them or there armaments that hit the house? She can’t be sure.

Just hours after she makes this heroic report of a baby dying. She dies in an alleged bombardment by the Syrian Army. As we are told by the activists?

Syrian forces murdered journalist Marie Colvin after pledging to kill "any journalist who set foot on Syrian soil", it has emerged.

Wow, had they really? Had they “pledged to kill journalists”? I wonder who heard them make such a pledge?

Jean-Pierre Perrin, a journalist for the Paris-based Liberation newspaper who was with Colvin in Homs last week, claimed they had been told that the Syrian Army was "deliberately" going to shell their centre.

Well, no that is not actually what was said.."A few days ago we were advised to leave the city urgently and we were told: 'If they (the Syrian Army) find you they will kill you'.

No mention of just who relayed this message to them! Who advised them? Who told them?
This kind of stuff bugs me. Always has, always will. It should bug anyone with a brain!

So just after we get a report of a baby dying and pledges to kill journalists, Marie Colvin a supposed ‘celebrated’ journalist gets killed.

One last thing the bizarre photos of this woman. They seem off. 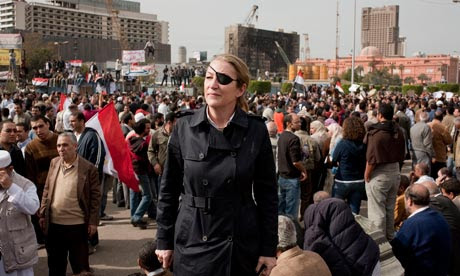 Is she dead. Is she alive. Unconfirmed reports? I just don't know?

Britain summoned the Syrian ambassador on Wednesday to lodge a protest over the deaths of two Western journalists and demand the repatriation of their bodies, the Foreign Office said.

Think about this? She was in Syria illegally.
How is it that Syria is responsible for her actions and her presence in a terrorist stronghold?
Syria is not. She is. Or, should I say NATO is?
Whoever or however she got into Syria, the involved parties should be the ones to get these bodies out.

If Syria can't produce the "bodies" will this incident be used as the justification for an assault on Syria? Or the creation of buffer zones or a no fly zone?