Yes, I am going long, because there is a lot to cover. A lot.
Besides the taxpayer funded bank bailouts were going to read some news on two Canadian banks involved in some dirty,dirty dealings....
The Canadian media has been very quiet on these two banks and their scandals.
Not surprising really, given, their non-coverage of bank bailouts!
Hoping you noticed the recent news about bank bailouts in Canada. "Secret bailouts"??? 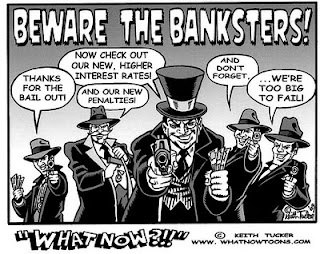 Did Canadian banks receive secret bailouts
You may or may not be aware that the government "secretly" bailed the Canadian banks out?
It wasn't all that secret. But, it sure didn't get a lot of coverage!
One could say the Canadian main stream/ corporate media was quiet on the news.
Particularly in comparison to their constant propaganda for the NATO war agenda
Of course the bank bailouts were far more important to the average Canadian.
Since John and Jane taxpayer are on the hook for it all!

If you were a Canadian reader at this blog, you were made aware that  the banks were bailed out as far back as 2008.


Moving along to today: Ottawa poised to bolster bank lending

"Ottawa is poised to guarantee loans Canada's banks extend to other financial institutions, a dramatic step aimed at ensuring the raft of multibillion-dollar bailouts around the world don't leave the banks at a competitive disadvantage.

The pledge to backstop interbank lending would cost the government nothing immediately, and the risk of ever being called on to bail out any of the banks is minimal because Canada's lenders have plenty of cash in reserve"


So, here is Ottawa, being so generous with taxpayers dollars and so enamoured of changing rules of ACCOUNTABILITY, for the banks. What is going on?


Ottawa was poised to guarantee loans Canada's banks extend to other financial institutions?

Then, Flaherty claims Canadians didn't bail banks out, but actually Canadians did in a round about way... the taxpayers, took 25 billion dollars of mortgages off of the banks books. That happened in October 2008. That is a bail out.


And there was more. I had another post on the topic with a link to the Government of Canada's website. I'll be damned if I can find that post!

However....Global Research had a good piece in 2009

The 64 billion dollar budget deficit should come as no surprise.

"It is directly related to a 75 billion dollar bank bailout program for Canada's chartered banks, announced, virtually unnoticed,  four days before the October Federal election.
The bank bailout received close to no media coverage; its budgetary implications were not analyzed.
In a statement by Prime Minister Harper on October 10, the bank bailout was casually presented as a commitment by the Federal government to purchase an initial $25 billion in "secure" bank mortgages from the Canadian chartered banks. The transaction would be implemented through Canada Mortgage and Housing Corp:

The decision implies a money transfer into the coffers of Canada's financial institutions. The money is "fungible" and can be used by the banks as they see fit:

"The federal government's [initial] $25-billion takeover of bank-held mortgages to ease a growing credit crunch faced by the country's financial institutions is not a bailout similar to recent moves made in the United States and other Western countries, Conservative Leader Stephen Harper said Friday."This is not a bailout; this is a market transaction that will cost the government nothing," he told reporters at a campaign rally in Brantford, Ont., ahead of Tuesday's federal election."We are not going in and buying bad assets. What we're doing is simply exchanging assets that we already hold the insurance on and the reason we're doing this is to get out in front. The issue here is not protecting the banks." (CBC News October 10, 2008, emphasis added)

The 25 billion dollar allocation was announced four days prior to the elections. Two days following the federal elections, the first mortgage purchase took place leading to an initial cash injection of 5 billion into the coffers of the chartered banks."

As mentioned by the Global research article this news of the bank bailouts received close to NO media coverage in Canada.

It is also important to point out that none of the Canadian political parties made an issue of this. I simply can't imagine why?........ (facetious)

Background out of the way, the bailout news has finally hit the mainstream. Four years later.

The Canadian Bankers claim that they were not given a bailout. Of course.--

The Canadian Bankers' Association dismissed a report Monday that the country's major banks would have been in serious trouble if they hadn't received billions of dollars in support from the Canadian government and Bank of Canada during the global credit crisis.

At both of these places the reader can read, what is clearly, a bailout of the banks.

Canada Mortgage and Housing Corporation (CMHC) will purchase up to $25 billion in insured mortgage pools as part of the Government of Canada’s plan, announced today, to maintain the availability of longer-term credit in Canada.

The banks transferred mortgage ownership to CMHC in exhange for funds. To ensure liquidity.

The Honourable Jim Flaherty, Minister of Finance, today announced the Government will purchase up to an additional $50 billion of insured mortgage pools by the end of the fiscal year as part of its ongoing efforts to maintain the availability of longer-term credit in Canada.

To conclude: The Canadian banks were bailed out on the QT. Now taxpayers are on the hook. It is a simple as that!

Here is some other bank news that has failed to garner any coverage of note in Canada!

A top U.S. regulator is accusing Royal Bank of Canada of engaging in hundreds of millions of dollars of illegal stock futures trades to gain Canadian tax credits.

The U.S. Commodity Futures Trading Commission (CFTC) alleged Monday that RBC "wilfully concealed and made false statements" in what it called a "wash sales scheme" between 2007 and 2010, in which the bank traded futures contracts with its own subsidiaries under non-arm's-length terms.

MIAMI - A federal jury decided Wednesday that Toronto-based TD Bank owes an investment group $67 million for its role in a $1.2 billion Ponzi scheme that was operated by a now disbarred attorney, Scott Rothstein.

The verdict came in a lawsuit filed by Coquina Investments, based in Corpus Christi, Texas. It was the first to go to trial of several pending lawsuits filed by wronged investors against the bank and others. Coquina attorney David S. Mandel said the jury "sent exactly the right message to TD Bank."