Huge Car Bomb in Syria & US support of Terrorism 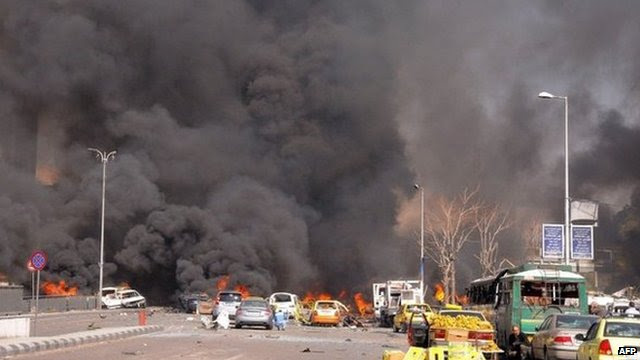 
A huge car bomb in the Syrian capital Damascus has sent smoke billowing across the capital's skyline.
Syrian media and pan-Arab satellite station al-Jazeera have spoken of deaths and injuries resulting from the blast, which state media have blamed on "terrorists".
Earlier, Russia and Arab League leaders offered to broker direct talks between the Syrian government and its opponents.

Russia and the Arab League (not the GCC) offered to broker talks.
What party/ies are not interested in a political settlement ?

Unsurprisingly, the US blocked condemnation at the Security Council of this act of TERRORISM against the Syrian people.

"We are disappointed that, as a result of the United States' position at the United Nations Security Council, the terrorist act in Syria was not condemned,"

If the US was so firmly against terrorism, going so far as to fight a 'war on terror', why not condemn a very obvious act of terrorism against ordinary citizens, on an ordinary day??

Clearly, the US approves of this act of terror against the Syrian people
It is that clear and obvious.

Updates in new post
Posted by Penny at 7:03 AM