Plan B for Syria: Preparations, Part 2

This article is a continuation on the theme of a post put up on Friday: Obama needs a Plan B for Syria: Drawing In Lebanon? I will put the third part up tomorrow in hopes of keeping this enjoyably readable

Looking at the influx of heavy weapons into Syria. Through what means do the arms flow.
And, what does the arms flow mean?

A surge of rebel advances in Syria is being fueled at least in part by an influx of heavy weaponry in a renewed effort by outside powers to “arm moderates” in the Free Syrian Army, according to Arab and rebel officials.


“arm moderates” You know that is pure mind control. There is no discernment, no discrimination on where these heavy weapons are directed. Propaganda pure and simple that will be ignored here, in favour of the facts.

The new armaments, including anti-tank weapons and recoilless rifles, have been sent across the Jordanian border into the province of Daraa in recent weeks 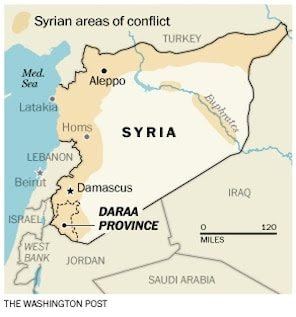 The officials declined to identify the source of the newly provided weapons but they noted that the countries most closely involved in supporting the rebels’ campaign to oust Assad......


The "countries most closely involved in supporting the rebels" /NATO mercs to oust Assad. Which nations might those be?


“They include the United States and its major European allies, along with Turkey and the United Arab Emirates, and Saudi Arabia and Qatar, the two countries most directly involved in supplying the rebels”

“The idea was to get heavier stuff, intensify supply”

Louay al-Mokdad, the political and media coordinator for the Free Syrian Army, confirmed that the rebels have procured new weapons donated from outside Syria


Another coordinator for the Free Syrian Army, whose units have received small quantities of donated weaponry in the past two weeks

The goal of the supplies also is to shift the focus of the war away from the north toward the south and the capital.


Clearly an expansion of this ongoing attack is at hand.
What other nation would be playing a role in distributing weapons near the capital of Syria.
The obvious answer is..... Israel.
Jerusalem Post acknowledges Israel’s role in the movement of weapons near Damascus. Israel the destabilizer of Syria: 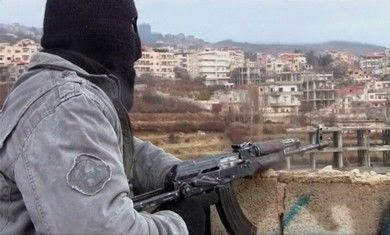 Monitoring defined: “ Observe and check the progress or quality of (something) over a period of time; keep under systematic review”
Therefore, if Israel is “monitoring”, it should be stated categorically, that Israel is overseeing the distribution and transferal of weapons into Syria over a  period of time.

By overseeing the weapons distribution Israel is then able to monitor weapons transfers to the NATO mercs destabilizing Syria.
Refresh your memory with the post from last week because this is where the previously mentioned field hospital comes into play Israel to set up field hospital to aid 'Syrian' refugees

As Freethinker correctly observed regarding the  multi-purpose field hospital

freethinkerFebruary 21, 2013 at 4:56 AM
I suspect any field hospital will also be used as an interrogation and intelligence centre.

And provide cover for weapons distribution!

“Israel isn’t going to interfere and stop weapons shipments to the rebels at this point, but it wants to make sure it knows what they have”


Of course Israel isn’t going to interfere. They are encouraging. Aiding. Assisting. Lots of spin in the JP article along the same line as the WP piece. NATO media always stays on message.
Arms going to the “right” terrorists as opposed to the “wrong” terrorists, of course.

Now back to WP article;
Why move more weapons into the South of Syria?


Rebel gains across the north of the country over the past year were posing no major threat to the regime in Damascus.

“Daraa and Damascus are the key fronts on the revolution, and Damascus is where it is going to end,” he said.

The M-79 anti-tank weapons in particular appear to be giving the rebels new confidence to attack government positions and armor, said Jeff White of the Washington Institute for Near East Policy, who says he also noted the unexpected appearance of the weapons in rebel videos several weeks ago.

Though there have been scattered sightings of the new weapons in other parts of the country, including Aleppo as well as Idlib and Deir al-Zour

Yet, the WP article ends with this

Although plans for an offensive on Damascus are being readied.....