Freethinker brought this article & the provocative pic from Ynet news to my attention
Thanks freethinker!
Lets walk through this Purim article and note the very different presentations.
One for foreign consumption, the other for domestic.

Ynet news:  http://www.ynet.co.il/articles/0,7340,L-4348121,00.html
An article about Purim. How do I know, since this is not in English.
Obviously, I put it through the translate function of Google, which results in this:

Including a "Google Error" stating that this page is available in English
( If anyone can do screen shots, feel free. I am not that technical)
And the article is available in English. That is correct.
However there is quite a difference between the images of Purim costumes on parade, presented in the two articles.
Here is the English link and a link to the Israeli version of this Purim holiday coverage 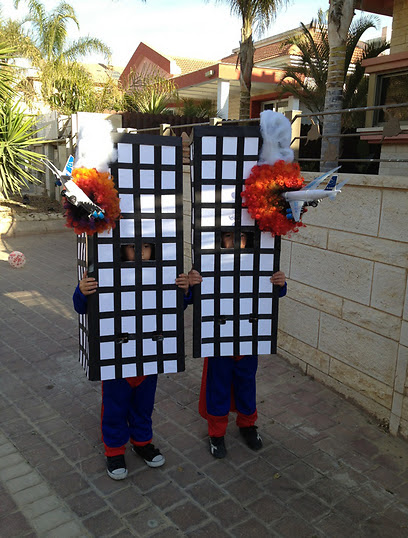 Ileana and Nehorai 7 people dressed up as the twin towers (Photo: Bad Beaton)

The Israeli article has this costume on parade.
Is this an appropriate celebratory costume for Purim?
I don't know. I don't celebrate Purim.
Is Purim a celebration of death? Judging by the 'costumes' these children are dressed in it would seem so.


"We are benefiting from one thing, and that is the attack on the Twin Towers and Pentagon, and the American struggle in Iraq," Ma'ariv quoted the former prime minister as saying. He reportedly added that these events "swung American public opinion in our favor."

Taking into consideration all the benefits that accrued to Israel because of 9/11 as suggested by Mr Netanyahu, it would seem the two towers under attack could be construed as something celebratory in Israeli society.
Others may feel differently

Thanks for the heads-up James! It was a good read. Thanks, also to Richard for taking the time to write a very informative article

BTW: don't forget my two earlier posts, it was a busy day ;)

Are the US and Russia bridging the divide on Syria?