Yes, we are going long. With many links. To understand complicated situations, we must delve into a more broad spectrum of information.
We are also going to look back to move forward. I am encouraging readers to read the entire two part post once it is up.
A great deal of my time is invested in this post. Time to think and time to write up.

Cyprus: Island in the Sun

So let's begin with today's news:


As we are all aware Cyprus is reopening it's banks for the first time in nearly two weeks. With very strict controls in place. Controls that will most assuredly remain permanent for the foreseeable future

These restrictions, the most severe ever imposed by a European Union member, are to be reviewed in days but some economists fear they’ll be in place for much longer.

“This is a typical set of exchange control measures, more reminiscent of Latin America or Africa"

A set of exchange control measures more reminiscent of Latin America or Africa? What should that tell us?
That an imperialist agenda is at play? That we are witnessing the tyranny of global empire?
It does appear to be the case.

To make the case that global tyranny is at play. First, consider the fact that hired guns have been brought into Cyprus for the occasion:
G4S and Cyprus banks

Some armed police have been deployed in cities and hundreds of staff from the private security firm G4S are guarding bank branches and helping to transport money.

Cyprus: U.S. To Dominate All Europe, Mediterranean Through NATO

I will excerpt key points, but, even the excerpt will be lengthy. Persevere!

*On February 24/11 a majority in the Cyprus parliament voted for the country to join the North Atlantic Treaty Organization’s Partnership for Peace program, a transitional mechanism employed to bring twelve Eastern European nations into the U.S.-dominated military bloc from 1999-2009:

*Cyprus is (was) the only member of the 27-nation European Union that is not either in NATO or the Partnership for Peace (PfP), the only EU member that did not need to join NATO or be on its doorstep in order to be accepted, and the only European nation (excluding the microstates of Andorra, Liechtenstein, Monaco, San Marino and Vatican City) that is free of NATO entanglements.

Cyprus did not need to be in NATO or the Partnership for Peace to get into the EU? Unusual? Yes.
This tells us Cyprus is of significant importance

*Cyprus was split into northern ethnic Turkish and southern Greek sections after the Turkish military invasion of 1974, although only Turkey recognizes the northern entity.


*AKEL Central Committee member Aristos Damianou “said there is clear evidence of NATO’s involvement in the division of Cyprus and wondered why EDEK [ADEL's coalition partner from 2008 until February of 2010], which chairs the committee on the Cyprus File – as the investigation into the 1974 coup and subsequent invasion is called – sides with DISY on the matter.” [3]

*Six years ago (05) Canada’s General Raymond Henault (now retired), at the time chairman of the NATO Military Committee, said, in relation to “Cyprus’s strategic importance in the eastern Mediterranean,” that “NATO has a very open policy for countries that want to work with it and Cyprus could be one of those if it decided to do that.” [8]

*KEL General Secretary Andros Kyprianou, who replaced Demetris Christofias in that role after the latter was elected president in 2008, blasted the narrowly-approved European Parliament report – 293 votes for, 283 against and 60 abstentions – which “included a clause inserted by Cypriot MEP Yiannakis Matsis [member of DISY and at the time of the center-right European People's Party] calling on the Cyprus government to join NATO’s Partnership for Peace (PfP) programme.”

*Kyprianou called the action of Matsis and fellow DISY MEPs “unacceptable and unethical” and described NATO as “an aggressive organisation that has scattered death and destruction in many corners of the world” and one which “continuously violates international law and the UN Charter.”

*The AKEL leader also warned that PfP membership mandates submitting defense plans and budgets to all NATO members, including Turkey, adding: “If that doesn’t bother some people, they should say so openly to the Cypriot people.”

*Regarding the European Parliament itself, Kyprianou stated: “It is unacceptable for a democratic country, operating on a completely democratic basis, to have its sovereignty compromised and have opinions imposed on it from abroad, wherever that opinion may come from.” [16]

Kyprianou must have been a seer. Cyprus has indeed had it's sovereignty compromised! Compromised,  by the opinions and actions from abroad. The EU and NATO.


*In April of 2009 DISY, DIKO and EDEK deputies in the parliament mustered a majority to pass a resolution calling on the government to join the PfP.

*Government spokesman Stefanou condemned the move, calling the PfP an “antechamber” to full NATO membership, and ruling party AKEL’s General Secretary Kyprianou said that any affiliation with NATO would irredeemably jeopardize the achievement of a just solution to the Cyprus problem, adding:

*“We remain committed to our position for the demilitarization of the island. We insist on defending the cause of Cyprus based on the principles of international law and the United Nations Charter.

*“We are adamant that we should not attach ourselves to the bandwagon of NATO and of the United States. We are resolute that nations must base their behavior on international law and not on the law of the ‘big fish eats the small fish.’” [18]

*It would be expected to accommodate ships and submarines assigned to the Mediterranean-based U.S. Sixth Fleet and American carrier and expeditionary strike groups (the USS Dwight D. Eisenhower aircraft carrier visited Cyprus in 2006) crossing the sea from the Strait of Gibraltar to the Suez Canal for operations in the Horn of Africa and for the war in Afghanistan.

The Sixth Fleet is normally stationed in Naples, Italy. 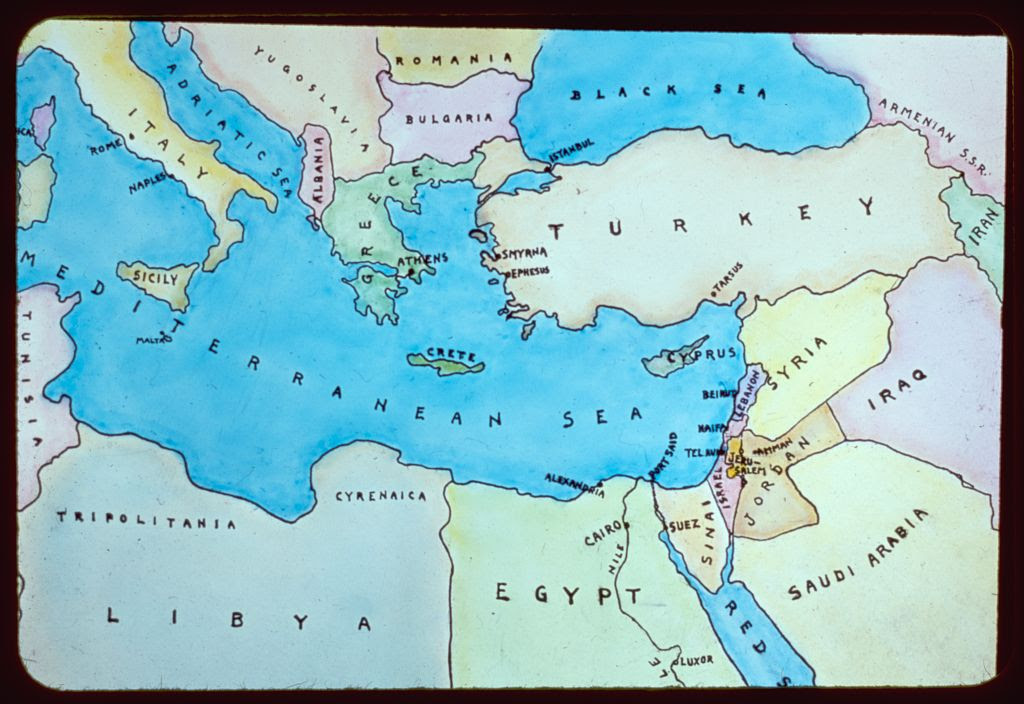 If the Sixth Fleet can be accommodated in Cyprus, can the NATO world army expand it's reach into Africa with more ease? It certainly seems a solid reason for NATO's move on Cyprus

*As a NATO partner, Cyprus will be unable to deny the Alliance and the U.S. the use and upgrading of military bases – infantry, air and naval – and will be employed for the U.S. and NATO interceptor missile system being developed in Europe, the Middle East and the South Caucasus, initially in relation to Aegis class American warships with Standard Missile-3 interceptors of the sort that have already been deployed in the Mediterranean.

*Cyprus, south of Turkey and west of Syria in the Eastern Mediterranean, is the final link in the chain that allows NATO to control the entire sea.

Let's look at what we have so far. A very strategically important island. Location, location, location.
Under the thumb of NATO. That has now been brought to heel economically as well as geographically.

Here is where we get to the economic aspect, along with control of resources. Or the denial of resource access.....