Looks to me as if the traitorous nations doing the deals are largely the US/Israel subordinates in the GCC.
Israel is the big winner and the Palestinians are getting railroaded.. :To rush or push (something) through quickly in order to prevent careful consideration and possible criticism or obstruction

Arab states appeared to soften their 2002 peace plan on Monday when a top Qatari official said Israel and the Palestinians could trade land rather than conform exactly to their 1967 borders. 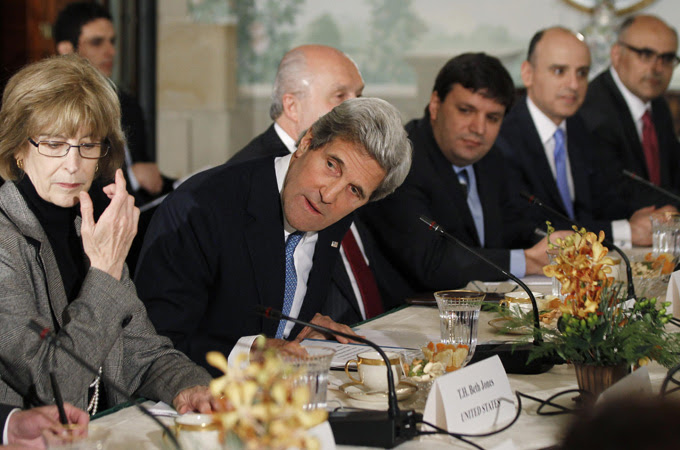 A senior Qatari official has said Israel and the Palestinians could trade land rather than conform exactly to their 1967 borders in what appears to be a softening of Arab states' stance on the 2002 peace plan.

Sheikh Hamad bin Jassim al-Thani, Qatar's prime minister and foreign minister, made the comment on Monday after he and a group of Arab officials met US Secretary of State John Kerry to discuss how to promote Israeli-Palestinian peace.

Speaking on behalf of an Arab League delegation, Sheikh Hamad appeared to make a concession to Israel by explicitly raising the possibility of land swaps.However, it has long been assumed that these would be part of any peace agreement.

"In the tumultuous world around ... it could allow the Palestinians to enter the room and make the needed compromises and it sends a message to the Israeli public that this is not just about us and the Palestinians."


Tzipi is very happy. Why? Arab league "consent" makes this appear, for perception management purposes, as if this deal is more then just catering or cratering to Israeli demands. Well, managed perceptions aside..this deal is exactly about giving Israel what it wants. Arab league consents makes the land theft more palatable to the masses. Easier to sell. Nothing more.

While little has changed in Israel's public posture, the remarks by Al Thani suggest that Kerry has had some success, at least, in coordinating a more unified regional strategy between the U.S. and its Arab partners.

Little has changed in Israel's public posture.... why would it?
Posted by Penny at 8:52 AM