The article from NYT's recalls,  and commemorates, the reporter McClandish Phillips recounting his exemplary work one a very controversial, likely slightly notorious news article. This story from 1965 story is quite interesting. Let's recall this forgotten page in history.

McCandlish Phillips, a former reporter for The New York Times who wrote one of the most famous articles in the newspaper’s history — exposing the Orthodox Jewish background OF a senior Ku Klux Klan official 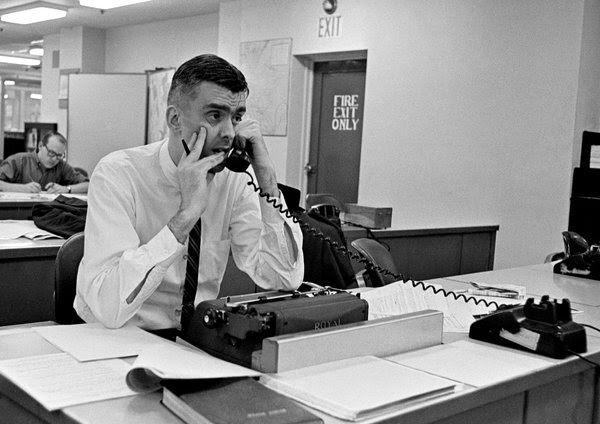 
Mr. Phillips’s most renowned article appeared on Page 1 on Sunday, Oct. 31, 1965, under the headline “State Klan Leader Hides Secret of Jewish Origin.” It was a rigorously reported profile of Daniel Burros, a 28-year-old Queens man who was the Grand Dragon of the New York State Ku Klux Klan, a chief organizer of the national Klan and a former national secretary of the American Nazi Party.

Here is the Grand Dragon of New York State. The Ku Klux Klan man and former national secretary of the American Nazi Party

This photo of Daniel Burros is for sale here, if your interested.

Mr. Burros, the article went on to document, was also a Jew — a former Hebrew school student who had been bar mitzvahed at 13.

The article remains a case study in a reporter’s perseverance in the face of intimidation. It is also a case study in the severe, unintended consequences that the airing of fiercely guarded truths can have for the guardian: despite threatening to kill Mr. Phillips if the article went to press, Mr. Burros, in the end, killed only himself.


A rigorously reported profile. I cannot even fathom such journalism occurring these days

A 28-year-old Queens man, Daniel Burros, was identified on Oct. 20 as the Grand Dragon of the Ku Klux Klan in charge of New York State at hearings of the House Committee on Un-American Activities.

If you wish to read the rest, of course, you have to purchase the article.


After Burros was exposed in the NYT's article he allegedly committed suicide.

By shooting himself twice. That's right, readers. Daniel Burros, the Judiac New York Grand Dragon Klansman, allegedly committed suicide immediately after this exposure in the NYT's article
. Death by two bullets. Yes, two bullets. In the apartment of another Klansman, Roy E Frankhouser. Roy E Frankhauser,  Grand Dragon of Pennsylvania, who had been named by the House Committee on Unamerican Activities.

You can find this news mentioned here


10/31/65 – Daniel Burros, 28-year-old Jewish-born Ku Klux Klan leader of New York, fatally shot himself with a revolver after the secret of his Jewish origin had been disclosed in a New York “Times” newspaper article on October 30. 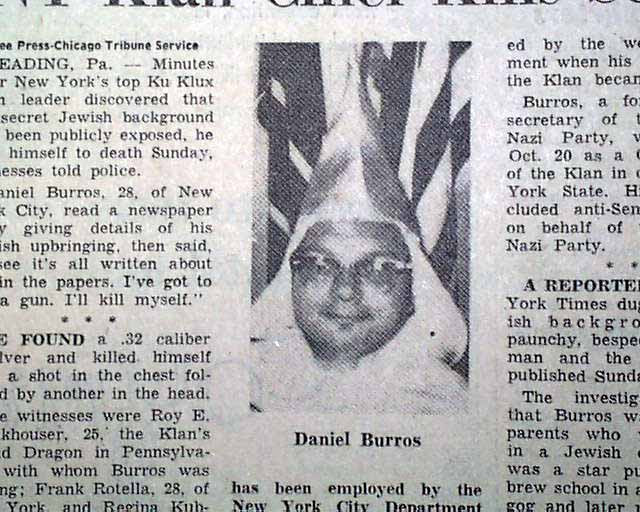 Reported in the above original news article.

A PDF. With the original news story. Front page.

How convenient. A nice tidying of  inconvenient loose ends. Suicide. Alleged.
Two gunshots fired by Mr Burros himself. First in the chest.  Then after firing that first shot into his own body,  into his own chest,  Mr Burros was still able to shoot himself in the head! What fortitude! Amazing!

WOW! WHAT A STORY!
Of course, I don't buy the suicide narrative.  Could anyone? Really?
Posted by Penny at 1:30 PM