Finally, after a brief respite the promised section on Syria. Be warned, it is long. But subjects such as this cannot be covered in a few sentences or a 30 second blurb.
An additional update at the end of the post: Very pertinent reading !!!

We first looked at, in Part 1, the strategic importance of Cyprus.
In Part 2 we learned about Cyprus’s massive energy resources. Known as the Aphrodite field.
We read, how  it isTurkey and Israel fit into this massive manipulation in the Mediterranean.
We understand the EU dealt a crushing blow to Cyprus’s aspirations to market their sovereign resource without involving Turkey. It is clear that the EU, through the cratering of the Cyprus banking infrastructure, has curtailed the island nations ability to fund the development of their vast energy resource.  A move that is most advantageous to Turkey. Israel. And of course, the US .

Where does Syria fit into this whole shifting of the strategic and geopolitical resource map?
Let’s go back to an older post here at the blog. Nearly two years ago, I had put up this post
Assad's "Four Seas Strategy" Damascus converges with China
This was a very big plan. Assad had very big ideas for Syria. This plan did not go unnoticed by the Israeli/GCC/US/NATO world fascist dictatorship.

“Since 2009, Bashar al-Assad has been promoting a "Four Seas Strategy" to turn Damascus into a trade hub among the Black Sea, Mediterranean Sea, Persian Gulf/Arabian Sea and the Caspian Sea.”

The Four Seas Strategy was set to make Syria into a big player in the energy game.


“He described Syria’s nexus of “a single, larger perimeter [with Turkey, Iran and Russia]…we’re talking about the center of the world” [17]. Syria can thus act as a means of access for EU countries to markets in the Arab world and western Asian countries [18]. Assad discussed this vision with Medvedev in May this year, and in August 2009 he received Iranian supreme leader Ali Khamenei’s blessing when he presented this strategy [19].

By partnering with the above nations, Iran, Russia & Turkey, Syria was setting itself up as the premiere regional energy hub. Whose influence would extend far beyond the middle east

“We would link the Mediterranean, Caspian, Black Sea, and the [Persian] Gulf … we aren’t just important in the Middle East…Once we link these four seas, we become the compulsory intersection of the whole world in investment, transport and more.” 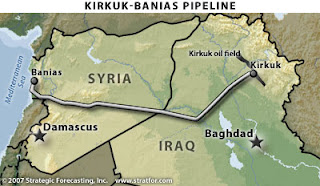 One of the pipelines Syria was working on with Iraq to make the strategy a reality.


Clearly Assad's Four Seas Strategy, while beneficial to Syria, Iran, Iraq, Russia, China etc.,
Was not going to be beneficial to the US or Israel.
In fact Israel would have been a bit player in this situation as Assad would have assured Syria's rise to eminence. The recent developments with Cyprus, Syria et al, see Israel the big winner in the Middle East.


Let's move away from transport and on to actual resources:

To understand this situation as best as possible, we have to understand the significance of the energy resource in the eastern Mediterranean basin as it relates to Syria, Cyprus, Turkey and Israel, which is the area in discussion 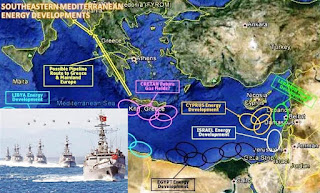 Above image from this article. The article is well worth taking the time to read.


In late 2010 huge natural gas deposits off Syria’s Mediterranean shores were discovered. The initial results revealed that the “entire” eastern Mediterranean is swimming in huge untapped oil and gas reserves


We have huge energy resources. Extremely huge, untapped energy resources in the eastern Meditteranean and we have Assad planning and working towards making Syria central to the transport of all that energy wealth...... This move would have given Syria much influence in Europe and China.
This plan would obviously have removed Israel and the US out of that central sphere of influence.

I am quite certain the obvious outcome of Assad’s Four Seas plan was not lost on the US/Israel partnership. The implications of the plan are huge. Europe could have easily fallen out from under the influence of NATO. China and Russia were set to become ever larger global challengers to US hegemony. A game changer. Most definitely.
Therefore, what the destabilization of Syria is actually, really, truly and factually about is controlling the resources via the energy transits. In this way Syria shares much in common with Afghanistan.
Though that could change depending on  the energy found in Syria’s coastal waters...
If massive resources are found and I suspect they are present and other interested persons are already aware of that. Then the attack on Syria will come down to transit and resource control both.
More on the the transit scenario of the destabilization campaign:


The actual struggle going on in Syria is a bit harder to understand – it seems that the main goal is not overthrowing Bashar Assad or achieving peace or fighting for human rights, as much as it is solving the problem of Syrian transit.

The image at the article is excellent. Assad could be "King", or not depending on how this all plays out.

Syria’s unique geographical position is far more interesting to other competitors in the field than the gas and oil reserves that can be found in the actual country.

The Syrian ports on the Mediterranean Sea have been a “sweet spot” for the entire Greater Middle East and for other participants in the redistribution of the gas market.
Throughout the country, there is a transnational gas pipeline AGP (the Arab Gas Pipeline) which connects Egypt with the Lebanese port of Tripoli. There is also an old IPC line, called the Kirkuk-Banias, that runs through Iraq ( first image in the post and one that Syria and Iraq had worked to get back up and running) – after the military invasion into Iraq in 2003, though, it ceased all operations. Syria and Iraq signed a memorandum in late 2010 in an attempt to revive this particular pipeline, which proposed new construction on the pipeline that would carry oil and gas from Iraq’s Akkas and Kirkuk fields to the Syrian port of Baniyas.

In July of 2011, Iranian authorities announced their plans to transport gas from the world’s largest deposits in South Pars through Iraq and on to Syria. On top of that, Assad’s government planned to extend the AGP from Aleppo to the Turkish Kilis . As a potential  part of Nabucco.
Nabucco is only viable if Russia’s pipelines fail. If Nabucco failed, it would seem certain that Syria could have supplied the energy elsewhere.


I have covered Nabucco previously. Nabucco seems destined to fail without Iranian oil.
Here
If I find more posts I will link them also.


One of the most active players in the Syrian opposition movement is Qatar, which is investing enormous amounts of money in the anti-Assad rebels. Doha, the capital of Qatar, is one of America’s closest strategic partners in the region, and ExxonMobil actually has multi-billion dollar contracts there. Qatar also has one of the world’s largest gas fields, South Pars, and it is the third-largest country in the world in terms of gas reserves (and the sixth-largest country in terms of oil exports)..

At the moment, the emirate transports gas in special tankers, which is not the most convenient or the cheapest way to deliver energy. Moreover, Iran is constantly threatening to shut down the Strait of Hormuz, so access to the Syria pipe and the Mediterranean port would be really helpful to Qatar.

At the moment, the country is looking at two different options for delivering gas to Turkey. The first is through Saudi Arabia, Kuwait, and Iraq, and the second would transmit gas from Saudi Arabia through Jordan and Syria and onward to Turkey. Turkey has faced many difficulties in the “Nabucco” project, including some with the actual suppliers, and they are extremely interested in Qatari gas. So both countries are willing to do anything in their power to make the Syrian regime more open to gas talks. In the meantime, however, these negotiations are making very little progress with Bashar Assad still in power.

Whew! I for one have gained a better understanding of just what and why the events in the eastern Mediterranean are taking place. And what makes them significant. Hope you have too?!

CHINA’S STRATEGIC SHIFT TOWARD THE REGION OF THE FOUR SEAS: THE MIDDLE KINGDOM ARRIVES IN THE MIDDLE EAST

Another article that covers much territory as it pertains to China's strategic interests.