Saying no to debt servitude and other slavish behaviours

Debt is a drag on your future earnings.: DEBT IS A DRAG ON ALL YOUR FUTURE EARNINGS. Therefore debt should be taken on, only with the greatest of consideration and thought.

That said, let's move onto this article "The Kids are saying NO to Credit Cards" 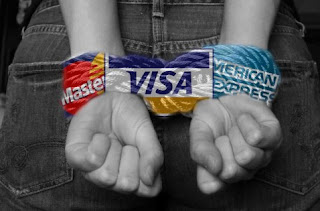 This 35 and younger crowd deserve  praise  for not digging themselves a big hole and jumping in with no way to get themselves out.  They are avoiding the debt trap set by the usurious credit card/bank cartels. This is very good news for those individuals. However, this is not such good news for the "financial industry"

Using the big pharma life style drug pushers as an analogy, the "financial industry" or usurious ones need to "get 'em while there young" and keep them for life. Your indebtedness ensures your slavery.

I am not so hung up on the reasons why the 35 and under crowd are eschewing debt. What is most interesting to me, is the effect this small group of individuals is having on the debt pushers.
The debt pushers profit margins are being hurt by the unintended consequence of the 35 and under crowds action.The debt pushers are being hurt by the slight resistance amongst their intended targets. The debt pushers have to find ways to manipulate and hook this crowd back into debt enslavement.
The actions of these young individuals, though completely unplanned on a mass scale, demonstrate the power wielded by the individual making choices that are in their own best interests.  In this case non debt servitude.

Quoting from the linked article:

After decades of watching plastic slowly take over from cash as the payment method of choice, the inevitable march of the ubiquitous credit card may be over.


According to a recent survey conducted by Sallie Mae and Ipsos Public Affairs, 39% of 18-to-24-year-old undergraduates owned a credit card last year, down six percentage points in two years. Federal Reserve figures show cardholders younger than 35 years-old are carrying less credit than they used to: $1,600 in 2010 compared to $2,500 in 2001. The U.S. experience mimics a Canadian trend away from easy credit, with Equifax reporting consumers here saw their credit card balances drop 3.7% in the fourth quarter of 2012 compared to the previous quarter.

The longer-term implications are potentially dire for the financial services industry, (Oh the weeping and wailing)which relies on consumers buying things – and paying interest on the resulting debt – for its long-term profitability and growth. If today’s younger consumers take on a more credit-averse attitude, the very fundamentals of the economy could be affected.

The very fundamentals of the economy could be affected? Hyperbole! As recently as 40 short years ago, very few individuals used a credit card and the economy hummed along just fine. The credit card came into being right at the time that big business and government began to connive against the populace, oppressing the workers and actually driving wages down. Imagine if people were paid wages they could actually live on and did not have to resort to supplementing their income with debt??
Horror of Horrors!!
But for who?
You?
Nope.
The debt enslavement industry?
Yes.

So, what is the point?

The point is.....the choices we make as individuals, especially if undertaken by a whole group of individuals can make a difference.We can bring about change. We can as individuals, participating with others, wittingly or unwittingly force the hand of those who use and abuse us.  If we act as individuals, yet as a large cohort, we really do hold the power. As these unwitting 35 year old and unders have clearly demonstrated.

Break free from debt and other slavish behaviours


Live mindfully. Our actions have consequences. Those consequences are all around us. Pay attention.
Make choices that will better ensure the outcomes you wish to see. For yourself. Your family. Your community.
The small group of people mentioned in the article likely did not consider or realize the impact of their decision on the financial industry.
Imagine if we all made decisions where we are specifically thinking of the impact those decisions make?
How different could the world be?
Posted by Penny at 8:01 AM