US leads world in “humanitarian” assistance to Syria

Look at the image below: U.S. leads in humanitarian funding to Syria


Since the conflict began in 2011, the United States has contributed the largest share, 25 percent, of global aid to Syria. Despite promises of assistance, some nations have yet to follow through 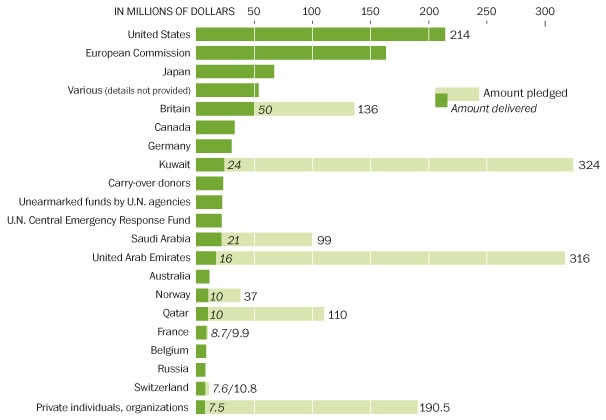 Interesting that the GCC has failed to live up to their promises of funding. But, then did these nations ever really intend to deliver this funding? Or did they portray themselves, with the help of the lying corporate media as the major backers to cover up the fact that the US was the real paymaster....???

The article that accompanies the graphic: US feeds Syrian, but, secretly

There is nothing even remotely resembling ‘humanitarian’ in the “assistance” the US and others have been doling up in Syria. Let's read the article and apply some good old common sense.

In the heart of rebel-held territory in Syria’s northern province of Aleppo, a small group of intrepid Westerners is undertaking a mission of great stealth. Living anonymously in a small rural community, they travel daily in unmarked cars, braving airstrikes, shelling and the threat of kidnapping to deliver food and other aid to needy Syrians — all of it paid for by the U.S. government.

So secretive is the operation, however, that almost none of the Syrians who receive the help are aware of its American origins.

One wonders why the US is going to such great lengths to keep all this humanitarianism hidden.
If the Syrians knew they might be grateful to the US. But they are not. They are grateful to another entity. Jabhat al Nusra. And that my friends is completely intentional

“America has done nothing for us. Nothing at all,” said Mohammed Fouad Waisi, 50, spitting out the words for emphasis in his small Aleppo grocery store, which adjoins a bakery where he buys bread every day. The bakery is fully supplied with flour paid for by the United States.


But Waisi credited Jabhat al-Nusra — a rebel group the United States has designated a terrorist organization because of its ties to al-Qaeda — with providing flour to the region, though he admitted he wasn’t sure where it comes from.

Obviously, the US food “and other aid” distributed by “anonymous” westerners is delivered to Jabhat al Nusra, who then delivers  into rebel held towns. Clearly this is how Jabhat al Nusra has been winning the influence game in Syria.With US help.

The United States also funds 144 field hospitals and clinics that treat injured Syrians across the country, and it provides 90 percent of all medical aid reaching rebel areas


The United States is not the only country providing help to the province of Aleppo. Turkey has given by far the most aid overall, and the French agency Medecins Sans Frontieres (Doctors Without Borders) runs clinics there.


Doctors without Borders- part of the NATO web

But among Western donors, “there is no doubt that America has taken the lead,” according to Wissam Tarif, who oversees the provision of aid for the Syrian Opposition Coalition.


Wissam Tarif!. Wissam Tarif is still around. The humanitarian gun runner we met so long ago...

(One of many individuals who connect the destabilization campaigns taking place in  Libya & Syria. Another one was Marie Colvin, the pirate journalist who was killed by the rebels. Soon we will meet yet another one.. however that will require another post)

Gosh, how long ago did readers here first meet Wissam?
It was in November 2011. Nearly 18 months ago. 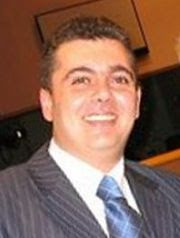 Continuing on with WP:

“Meanwhile, Jabhat al-Nusra, which last week publicly confirmed its allegiance to al-Qaeda, is receiving much of the credit for the help Syrians are receiving. The road leading into the town where Abu Omar distributes American-bought food is lined with black banners advertising the militant organization’s presence.”

There is no way, in hell,  the US is unaware of this situation.
Clearly Jabhat al Nusra is doing the work of America As I have always contended. As, has been obvious.


One last question:  Since there are at least 50 US supplied bakeries in this small rural territory, is it possible the bakeries are distributing more then bread? To people who are not Syrians?

If you haven't read this post: Iran, Pakistan, Syria, Qatar: Pipelineistan at work
You should. In my opinion
Posted by Penny at 10:16 AM