Wow! Chechens in Boston. Framing Russia? Not a surprise.

As I said, right here, on this blog. If the fingers are pointed at Russia regarding the explosion in Boston......  Don’t be surprised.

Tuesday April 16/13 in the post titled :Bombs at the Boston Marathon: Bomb sniffing dogs present pre-race.
If you had not read what I had suspected then, let me rehash here and now

“In all my years blogging, I recall a ball bearing attack taking place at a Moscow airport.


The suspect held extremist Wahhabi ideologies. So we are talking Chechen, most likely.
His family claimed at the time he ( alleged bomber)was already dead.
Perhaps he was? Perhaps he wasn't?

Why am I rehashing such old news at this time?
With all the tit for tat going on between the US and Russia. And the obvious intent of the US to destabilize Russia.... Let me put it this way, if Russia got the frame/ blame, I would not be the least bit surprised.
Not at this critical juncture.”


And what, to my eyes, does appear? 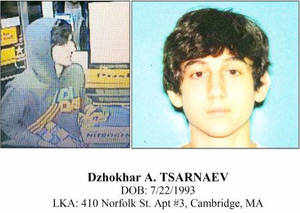 "The man, whose identity has not been released, died in the hospital after being hit with bullets and injured by an explosion, a doctor at Beth Israel hospital told reporters"

However, some western media has already moved to Russian brothers

* Suspected Boston Bombers From Russia; One Dead, One On the Run


AP sources identify the surviving Boston bomber as Dzhokhar Tsarnaev, 19.
The man is said to be from Russia’s south, not far from the Chechen Republic.
The man reportedly lived in Turkey before arriving legally in the US at least a year ago. The name is listed among the recipients of Cambridge scholarships in 2011.

The second suspect is said to be his brother Tamerlan, 26.
An NBC report claims the two immigrated at least two years ago. One of the brothers is  said to have a Massachusetts drivers’ license.
Some reports say the two may have arrived in the US from Turkey and have Turkish citizenship.

Which suggests to me they are likely part of the pipeline of NATO aided and abetted terrorists.

The Tsarnaev family moved to Dagestan from Kyrgyzstan in 2001, the school spokesman told RT. Dzhokhar studied there for just one year and  produced no particular impression, good or bad, on the teachers. The family moved to the US in 2002, RT was told.
Dzhokhar was born in Kyrgyzstan. The family, which also included two daughters, Bella and Amina, had the status of refugees at the time they moved to Russia.
Dzhokhar has several Chechen-related interests stated in his profile. He states that he speaks Russian, English and Chechen and holds career and money as his personal priorities. He claims he is a believer in Islam.


The first suspect in the Boston Marathon bombing, who was shot dead in a firefight with the police, is allegedly Tamerlan Tsarnaev, an older brother of the suspect at large.
He is said to be  from Chechnya, who fled to the US as a refugee.
Tamerlan fled Chechnya with his family because of the conflict in the early 90s, when he reportedly was about five years old. He is said to have lived for years in Kazakhstan before heading to the United States as a refugee.

However, despite spending the most of his life in America, he claimed not have “a single American friend.”

“I don't understand them," reads one of the captions to the set pictures of Tamerlan, which RT managed to find online.

In 2009 he was put under arrest for beating his girlfriend, who described him in one interview as a “very nice man,” according to the City of Cambridge Police Department.

A passionate fan of boxing, he spent a lot of time training for competitions, according to  Johannes Hirn, who posted a photo essay entitled ‘Will Box for Passport’ on his page on Photoshelter.com.


Competing for New England in 2010 National Golden Gloves completion in Utah, Tamerlan Tsarnaev dreamed of being “selected for the US Olympic team and be [a] naturalized American.”

“Unless his native Chechnya becomes independent, Tamerlan says he would rather compete for the United States than for Russia,” reads the caption to one of the pictures that shows Tamerlan during his workout.


Predicting the Future: The destabilization of Russia

Update: video referred to in the comments by Marie


If your reading here, check out the latest..


Boston Bombing: NATO- Taking the fight to Russia via Georgia/Chechnya ??

Email ThisBlogThis!Share to TwitterShare to FacebookShare to Pinterest
Labels: NATO, Strategy of tension, US