Car bomb or multiple bombs have exploded in a Turkish/Syrian border town.
And the spinning has begun....

3 hours ago: 40 dead in Turkey car bombings near Syria

People gather at the site of a blast which killed and injured a number of people in Reyhanli, near Turkey's border with Syria, Saturday, May 11, 2013. Two car bombs exploded in a Turkish town near the border with Syria on Saturday, killing at least four people and injuring 22 others, officials and media reports said.

Two car bombs exploded in a Turkish town near the border with Syria on Saturday, killing around 40 people and wounding 100 others, officials said. Turkey's deputy prime minister said Syria's intelligence and military were "the usual suspects" behind the bombings, but said authorities were still investigating the attacks.
The blasts, which were 15 minutes apart, raised fears that Syria's brutal civil war violence was crossing into its neighbor.

Car bombings are signatures of NATO's Islamist mercs... and the border between Turkey and Syria is crawling with Islamist mercs ala NATO who have no doubt retreated from the Syrian Army push to clean the country of NATO mercenaries...


Coincidentally.... NOT! : Erdogan has gone to the US to present Obama with (concocted) proof of Syrian chemical weapons use attributed to Syrian Army 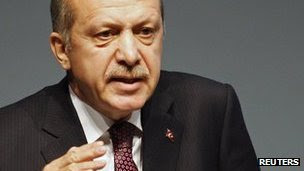 He cited the discovery of missile remains and Syrian patients showing signs of wounds from chemical weapons.
Similarly, US Secretary of State John Kerry said he now believed there was "strong evidence" of Syria using gas.
The White House previously said it had "varying degrees of confidence" that Syria had used chemical weapons.

Will be updating asap!

A U.S. official confirmed Ford’s secret  (covert) visit, which occurred along the Turkey-Syria border.  He briefly crossed into Syria to meet with opposition leaders before returning to Turkey.  Ford did not go deep into Syria, according to the official.
“It was literally just across the border,” the official said.

A State Department official confirmed that Ford had “spent some time” at a border crossing to discuss the situation in Syria with  members of the Free Syrian Army and the Syrian opposition.  Ford had gone to the border to participate in the U.S. government’s delivery of  Meals Ready to Eat (MREs) that the U.S. is providing to the Syrian Coalition and Supreme Military Council.

Officials did not want to provide additional details of Ford’s visit for security reasons.


Which tells us all this visit had was not just about meals. The "Supreme Military Council" and Robert Ford?
I mentioned the SMC the other day. General Idriss  is being presented via the media as a "moderate" his involvement with Ford tells me he is not a moderate..

A reminder from Thursday's post..." To empower Idriss, the United States may expand its training and nonlethal assistance to include supplying weapons"

Therefore, it should be obvious, Ford's visit to Syria and  Idriss was about supplying more then meals.

Conveniently: 169th NATO Chiefs of Defence meeting
May 14 and 15th/2013
Will the agenda change?

ie: Inconveniencing the innocent while making life easier for the wrong do-er
Doing exactly the opposite of what you preach....
Doing ridiculous things just for a political reason
check, check, check!

Well they have that one all figured out.

Is the UN going to withdraw peacekeepers? At this time, considering Israel's two strikes on Syria already, which nation would benefit from such a move.

Thinking right now of some old posts I had done, way, way, way back suggesting the attack on Syria could possibly come through two fronts. Israel and Turkey.
Withdrawing peacekeepers from Golan would make a move from Israel via Golan possible.
Anyone know of any IDF's movement in the area?

Email ThisBlogThis!Share to TwitterShare to FacebookShare to Pinterest
Labels: Strategy of tension, Syria