Wrap Up: Battle Aleppo. Kosovo/Serbia. US & Russia to meet and way more...

Summarizing: The G-8 meeting. No concessions to the NATO tyranny. Russia held the line they have for so long now.G- 8 Declaration WILL NOT mention the fate of Syrian leader Assad & Updates!

The NATO world army, cared not, because they expect to up the ante: Obama, Syria and the Aspin doctrine: Plans for a "limited" strike on Syria? And Turkey, US cooperate on arms (aid ) to terrorists in Syria (rebels) Doha lurks

What aspect/s of the contract are not yet finished? What has been delivered already?
What is yet, undelivered?

IT’S BEEN 14 years since the United States, defying Russian obstruction in the U.N. Security Council, launched an air campaign....
Critics warned at the time that U.S. intervention would sow chaos or empower radicals

Which it did. It created a terror state in Kosovo. It empowered radicals. But, the KLA were western radicals. Just like AQ and al Nusra.

The incipient settlement is an example of how Western intervention can stop a bloody and seemingly in­trac­table ethnic war — but also of how much effort is required. Since the fighting ended in 1999, NATO has kept a peacekeeping force in Kosovo, including U.S. troops; 760 American personnel are still there. The deal between Mr. Thaci and Mr. Dacic was brokered through the tireless diplomacy of European Union foreign policy chief Catherine Ashton, who oversaw 10 taxing rounds of negotiations.

If anything was really stopped there would be no NATO peacekeeper force on the ground. That is self evident, despite the spin by WP.

The United States should support that ambition and also press countries that have not yet recognized Kosovo, including several of its neighbors in southeastern Europe, to do so. But the Obama administration would also do well to take a lesson from this history. Limited U.S. military interventions, accompanied by a sustained follow-up and vigorous diplomacy, can save lives and stabilize troubled regions — even when Russia and the U.N. Security Council don’t approve.


Definite reference to Syria and the already mentioned Aspin Doctrine


Senior U.S. and Russian officials will meet the international mediator on Syria, Lakhdar Brahimi, in Geneva on Tuesday to discuss a peace conference, a U.N. spokeswoman said on Friday.


An international peace conference aimed at ending the conflict in Syria, first muted in June or July, is unlikely to take place before August after G8 leaders clashed with Russia over the nature of a transitional government. 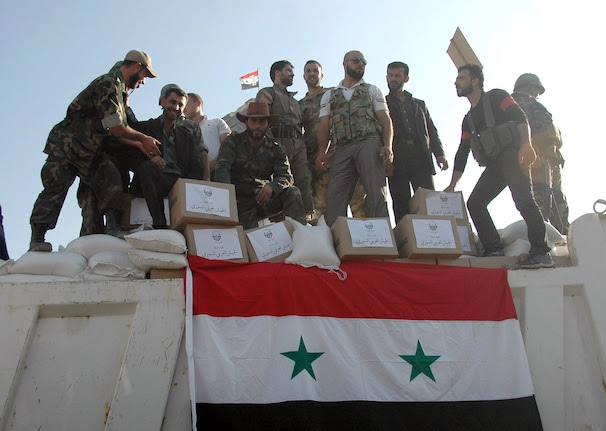 The United States, Britain and France have supplied the United Nations with a trove of evidence, including multiple blood, tissue and soil samples, that U.S. officials say proves that Syrian troops used the nerve agent sarin on the battlefield. But the nature of the physical evidence — as well as the secrecy over how it was collected and analyzed — has opened the administration to criticism by independent experts, who say there is no reliable way to assess its authenticity.

Two views of the battle in Northern Syria.
The importance is understood. The interpretations differ.
You read. You decide.


A few miles from the border with Turkey, the Syrian army regularly lobs artillery on towns and villages where rebels and their Western backers had once envisioned an enclave to lay the groundwork for a post-Assad Syria.

The regime's moderate gains here, in territory Syrian rebels had dominated for over a year, have taken on new significance as the U.S. prepares to help arm rebel forces. Opposition supporters at Syria's northwestern border say an international defense of this territory would have given rebels a home base to govern and train—just as the Libyan opposition was able to do in Benghazi while rebels battled the Gadhafi regime.

Idlib was largely cleared of government forces in early 2012, less than a year after the start of the uprising against President Bashar al-Assad. The countryside here, abundant with olive groves, hosted some of the first and largest training grounds for rebel factions. Rebels held parts of the provincial capital, Idlib city, in February 2012, in what became a model for staging attacks on urban centers from the suburban countryside.

But government forces now control Idlib city, and the province has steadily slipped this year from secure rebel control. While the regime has appeared focused on consolidating its control around Damascus and the Western coast, that hasn't made it any safer here, local rebels and activists said.


View to a kill # 2:  Obstacles To A Syrian Regime Victory In Aleppo
And here

Logistical and Other Challenges

For all the regime’s announcements of an imminent victory in Aleppo, it is important to remember the very significant obstacles. Many of these are in fact the same that prevented the regime from ousting the rebels from the city in summer 2012.

There are, in effect, two ways that the regime can reach Aleppo in force. The first involves a thrust northward along the M5 highway from Hama. The M5 highway would offer the regime the best supply infrastructure leading to the city, greatly alleviating the logistical burden necessary to support a considerable mechanized advance on Aleppo. However, there are a large number of significant rebel positions along this route. The advancing force would have to pass through northern Hama governorate; Maarat al-Nuaman and Saraqeb, Idlib governorate; and Khan Tuman and Khan Asal, Aleppo governorate. All of these positions would have to be seized or reduced before the regime could advance without fearing for its supply route.

To maintain the integrity of the M5 route, the loyalist forces would also need to displace the rebels from the immediate area of the highway and leave enough security forces along the route to maintain its ability to function. This would be no easy feat. In fact, in some areas along the M5 highway — such as Morek, which the rebels seized June 13 — the rebels are actually advancing.

The regime’s second option to reach Aleppo is to skirt the main M5 highway and instead take secondary roads from Salamiyeh to Khanasser, avoiding or defeating the new rebel offensive in the eastern Hama plain. From there, the force would move north to link with the outer reach of the regime position in Tall Sughayb and the Safira defense factory in Aleppo governorate. Even though this route avoids the bulk of rebel forces along the M5 highway, it is not clear that the secondary roads have the capacity to support a large regime offensive. In any case, the rebels have already recognized the potential for this route and have placed some units in a blocking position, ensuring that an advance would not be unopposed.

Complicating the regime’s future battle plans even further is the recent U.S. decision to increase the arming of the rebels. There will likely be a combination of more direct aid from the United States and looser restrictions on the quantity and quality of weapons that other states are already providing. The United States is moving toward a more prominent role in arming the rebels, but at least initially its involvement will be heavily tempered by its desire to avoid putting weapons, particularly man-portable air-defense systems, in the hands of extremist groups.


Regime forces are making progress, but they need a victory in Aleppo before they can legitimately claim to be close to undermining the rebellion. In order for the loyalists to seriously threaten the rebel position in Aleppo, they need to be able to reach the area with a force of considerable size and to keep that force supplied.


There is more to read at all links. Trying to cover lots of info in as little space as possible

Rosneft has signed a deal to supply China with $270bn worth of oil over the next 25 years, as Russia looks to boost ties with the world’s largest energy consumer.


The contract is set to be followed by an agreement by Novatek, Russia’s largest independent gas producer, with China’s Sinopec to take a stake in its $20bn liquefied natural gas project on Russia’s remote Yamal peninsula.

The two deals mark at least a partial pivot towards Asia as Russia seeks to exploit China’s ever-growing appetite for energy, amid stagnant demand from Europe and attempts by European countries to reduce reliance on Russia.

Trade without killing? Who would have thought that possible?