Despite the tragedy in Odessa- Keep your eyes on Slavyansk, Ukraine

Wanted to get some of  this  info up yesterday, but, just couldn't.
Yesterday-  A large parade of anti-coup protestors in Odessa Despite hot weather, thousands of people in the southern Ukrainian city of Odessa marched through its central streets on Thursday, May 1, carrying placards that read “Odessa Is a Hero City”, “Referendum” and “Fascism Won’t Pass”.

Today that parade was followed by what looks to be a massacre instigated by "soccer hooligans"?
I have a very hard time believing these are "soccer hooligans"
So, is this the new bogus name that the NATO media is going to use to cover up the crimes of their little fascists?


It kicked off after marchers calling for Ukrainian national unity, which the Kyiv Post claims was largely comprised of supporters of the local soccer team, encountered a rival pro-Russian group. Barricades were set up and buildings set aflame. Initial reports suggest that dozens were wounded, with at least three people shot dead, according to police. Then, police said at least 31 people were dead after pro-Kiev demonstrators hurled Molotov cocktails into a building where a pro-Russia contingent was holding out

Well if Kyiv Post tells us they are supporters of a local soccer team, then we have to assume that Kyiv Post is covering up for Svoboda and Right Sector.


Who set a building a fire that was full of anti-coup protestors? Soccer Hooligans? 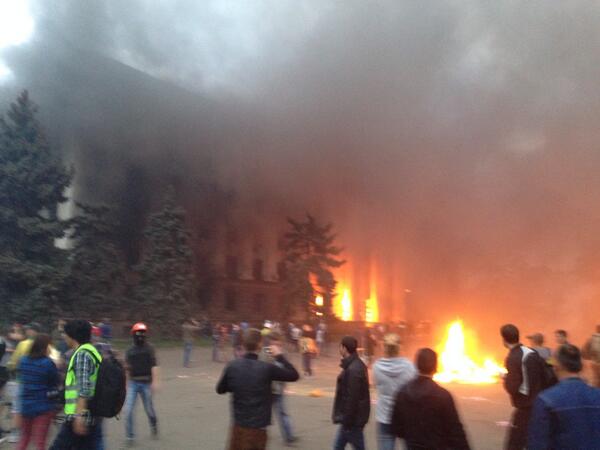 The earlier attack on Slavyansk

Yesterday... President Putin had suggested to Ukraine they call off their military adventurism in the East Obviously, that did not happen.

On March 27/14 (before Mike Whitney put up an article on the same subject) I had rehashed the Afghanistan scenario in Ukraine- Hope you read it? If not ..  History Repeats- Will Afghanistan repeat in the Ukraine?

As for Ukraine. A nation divided. Already impoverished. It is ripe for the picking -apart.
Instead of  "some stirred up Moslems" - created and nurtured by NATO,  we have another fighting force of western nurtured  fascists thugs. Gladio style (A)? Or a  Gladio B?  Doesn't matter?
It would seem those two have co-mingled In the Ukraine. And Chechnya.
Would the western backed thugs be willing to spend months poking away at Russia?

Would the western backed thugs be willing to spend months poking away at Russia?
I am sure they would. Which has resulted in the anti-coup protests. Is Russia directly involved? Doubtful. Are they guiding the way. I would suspect they are.
This next piece comes to us form the RUSI- a decidedly NATO looking place
Let's read what they have to say about Slavyansk and more


The Strategic Importance of Slavyansk  RUSI Analysis, 1 May 2014

The Ukrainian military operation that began this morning (2 May) in Slavyansk seems to have been directed against a lesser problem for the Kiev government than anything that has happened recently in Donetsk, Luhansk or Kharkiv. But there are hard strategic reasons why this small city has become the new focus of the Ukrainian crisis over recent days. It is at the centre of an escalating game of deterrence that both Kiev and Moscow are playing against each other.

Kiev knows that it has a strategic reserve of Kalashnikov assault rifles and other light weapons stored in Ukraine as a mobilisation reserve dating back to Soviet times. It has hinted quietly but strongly in back channels between Ukrainian and Russian military establishments that it might be prepared to open this strategic reserve of weapons to an eastern Ukrainian population prepared to resist any Russian military incursions. Since the stockpile consists of up to five million weapons, the prospect would be a nightmare for Russian military planners if they realistically prepared to move into eastern areas of Ukraine. The prospect of civil war and an anti-Russian insurgency on an unprecedented scale with unpredictable consequences represents a real – if extremely dangerous – bargaining chip for Kiev.

Or, if the five million weapons were to make their way to anti-coup protestors?

The stark fact is that at least half the strategic stockpile of light weapons on Ukrainian territory is concentrated near Slavyansk.
This explains many of the manoeuvres around this small and otherwise unimportant city. On 24 April Ukrainian authorities re-launched their ‘counter-terrorist operation’ against Russian separatists who had occupied key areas to restore Kiev’s control over Slavyansk. In a coordinated response Russian forces edged closer to the Ukrainian border in such a way as to threaten a territorial incursion to support the separatists. This Russian move was dangerous but had the desired effect when the Ukrainian counter-terrorist operation was immediately halted by Kiev. It was an interesting standoff between two sides threatening each other with their adversary’s worst fears. Today, Kiev has upped the ante in the standoff and will test Russian resolve to prevent the Ukrainian government from regaining control of the city and its light weapons stockpile.

That was last week, roughly. Today we saw the move on Slavyansk yet again and in a more robust manner.

Such a standoff has illuminated a number of strategic factors. The multiple seizures of government buildings in eastern Ukraine, not just in Slavyansk but also in Konstantinovka in Donetsk Oblast are aimed to make it impossible for Ukrainian forces to fully control the territory and, in effect, to cut it off from its strategic stockpile of light arms which are the essence of Kiev’s present deterrent posture.
Whereas symbolic government buildings in other cities might be occupied by Russian separatists for political and symbolic reasons, in Slavyansk the separatists effectively control the whole city and the immediate surrounding area. They have physical control over the strategic weapons reserve.

Do the anti-coup protestors have control of these weapons? Soon enough, I would think, we will know

The second reason control of Slavyansk is important to the anti-coup protestors and to Moscow?
Think of the Afghan trap and giving the Soviets their Vietnam- repeated. This is the scenario I mentioned in late March. A scenario that has to be on the mind of Moscow's leadership

It is possible, of course, that Moscow fears the export of armed insurgency onto Russian soil as revenge for the Crimean annexation. More outlandishly, it is also plausible that the Russians are concerned that weapon stocks in Slavyansk might be used for ‘ethnic cleansing’ or even genocidal purposes against Russian minorities in a Ukrainian civil war.

The RUSI uses terms such as outlandish when describing Moscow's fears. However, the cause for concern is legitimate. Because history does have a weird way of repeating

Finally, there has been a notable increase in the public discussion by Russian diplomatic representatives around the world that Russia would have a legal right to send peacekeeping units into Ukraine should the situation in Slavyansk and other cities deteriorate further (such statements have been made by the Russian Minister of Foreign Affairs Sergey Lavrov , Russia’s permanent representative to the UN Vitaliy Churkin, as well as some Russian senators). The Geneva Agreement concluded by the US and Russia offers a useful mechanism for doing so: a Russian contingent could be presented as Moscow’s ‘contribution’ to an OSCE observer mission, which is explicitly called for in the Geneva Agreement.

It should be noted that the Geneva Agreement of 17 April contained considerable loopholes which did not define any restriction on the number either of observers to guarantee a peace process or the structure of any formations to support them. Regardless of what explanation Russia may offer, the real outcome of any military intervention will be to boost the forces which are already defending Slavyansk against Ukrainian government troops.

Slavyansk may be a small city that has never been on the political radar of Western planners until very recently. It now seems to be the focus for a game of deterrence and brinkmanship that Kiev and Moscow feel compelled to play and in which, despite evident Russian military planning, neither is likely to be in full control of all the elements at work on the ground. And the further use of military options remain very much part of Russia’s strategic thinking. Today, Kiev has upped the ante in the standoff and will test Russian resolve to prevent the Ukrainian government from regaining control of the city and its light weapons stockpile.

Speaking of peacekeepers and the Geneva Agreement of April 17th?
Ukraine's offensive destroys any chance of peace

I have more,but, have run out of steam. Lots of reading here anyway- goodnight!
Posted by Penny at 8:18 PM