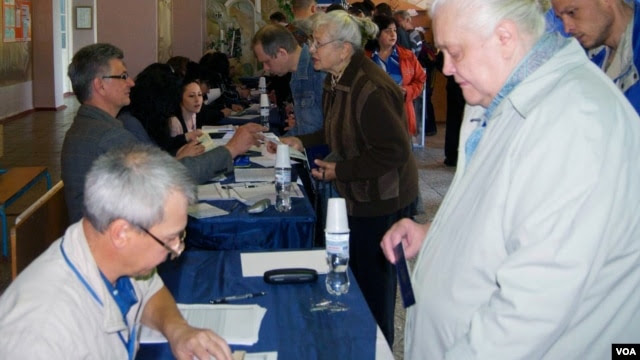 Eastern Ukrainians began voting early Sunday in a referendum on secession - with most voters saying they were voting for a break because of the military campaign by Kyiv against Pro-Russian separatists. Other voters cited an expectation for a better life if their region is annexed by Russia.

In Mariupol, scene of fierce fighting last week, there were only eight polling centers for a half-million people. Queues grew to hundreds of meters in bright sunshine, the event taking on an almost festive atmosphere as one polling station overflowed and ballot boxes were brought out onto the street

As long as the ballot boxes remains sealed, no problem moving them out to the people. And you will  note the reporter did NOT mention any tampering- Had there been anything untoward happening VOA would have been all over it!


The interim government in Kyiv has denounced the referendum as illegal and a sham.

Because Kiev will lose in the referendum and they know it. So do the western bully governments. Who have already said, in typical fascist dictatorship style, they will not recognize the results.
Like children have hissy fits...............

But those who did file into polling stations said the recent violence in the east was reason enough to secede.
There is deep anger towards the interim government for its military campaign to restore order in eastern Ukraine

The deaths of at least 42 people last weekend in Odessa after clashes, and a fire and fighting Friday that left about 20 dead in Mariupol is figuring prominently in the minds of the voters.

"I voted today because I believe after what happened in Odessa and Mariupol, the unity in Ukraine is impossible and that it is better to secede," said twenty-three-year-old translator Alec.


Of course mass killings of men, women, children would weigh heavily on the minds of these people.
What life will they ever have under the thug/fascist/terror regime of IMF appointed autocrat Yats?
A life of hardship and misery.

Western media meme- hastily arranged referendum- as if they planned this all in a week
The referendum was called for months back- It is not hastily done.

Maria, an eighty-one-year-old grandmother, breaks down in tears after voting in a polling station in Pushkin Boulevard in central Donetsk. She says the Kyiv government consists of bandits and they are attacking people and burning them out.
She hasn't been able to sleep. Born in the Russian city of Smolensk, she has lived in Donetsk for 60 years and says she wants a normal life for her children and grandchildren.

Fifty-five-year-old Svetlana also worries about the threat of violence but highlighted the poor standard of living in Ukraine for her vote to secede. She says she has lost her husband, son and brother. "So you think life is so good here in Ukraine?" she asks.

Western media spin about Russian propaganda... but the fact is, and this is acknowledged

Kyiv has not helped to dispel that impression, pursing hit-and-run tactics that deny little territory to armed and club-wielding separatists but leave local residents fearful.


Most voters in Donetsk and Luhansk say they hope that if the referendum approves the regions' status as independent republics, Russia will quickly agree to annex them.


It seems quite clear participation in the referendum is high. And the sentiment is anti- coup.
Completely unsurprising, really, given all that has gone on

Now onto the western dictator powers

US will not recognize results

Jen Psaki, a State Department spokeswoman, said late Saturday the U.S. will not recognize the results. She said the polls "violate international law and the territorial integrity of Ukraine."


The US as usual, as always, as a matter of course, does not support  the people actually exercising their own right to choose. Since when is the US ever concerned about international law or territorial integrity
Syria? Libya?

Psaki said the U.S. is "disappointed" that Russia has not used its influence in the region to postpone the poll,

Clearly Russia does not have the level of influence that the US is always suggesting they have?
High voter turnout is evident in this headline- Donbas residents swarm polling stations across eastern regions to cast votes in referendum

The referendum, if you wondered why Kiev and the West are working so hard to discredit it, will affect 7 million of a total of 46 million residents (wondering if that figure includes Crimea?)


Kiev has dismissed the so-called “referendums” addressed to seven million of Ukraine’s total 46 million inhabitants as illegitimate and unconstitutional.

Anyway... it's substantive and looks to involve the possibility of Ukraine having about 1/6 of it's population turn against the coup government!

Its Western backers echo that, but are concerned a yes result could scupper plans for a nationwide May 25 presidential elections seen as crucial for restoring stability.


Western coup backers should have thought about stability long before they instigated a coup
Posted by Penny at 9:30 AM

Email ThisBlogThis!Share to TwitterShare to FacebookShare to Pinterest
Labels: Ukraine