The image below was not chosen to offend any of my American audience.
I am certain that you all, like myself, would want people where ever they live, to choose their own way. Amongst themselves.
Unfortunately psychopaths who have usurped power have other twisted ideas
Directly below this image is the news of the day and a reminder. Scroll down!

"Mission Accomplished" Claimed George Bush with regard to Iraq- some years back.
But, today another US President, a peace prize winner, has again accomplished his mission.
A mission that my readers were informed of two months ago! 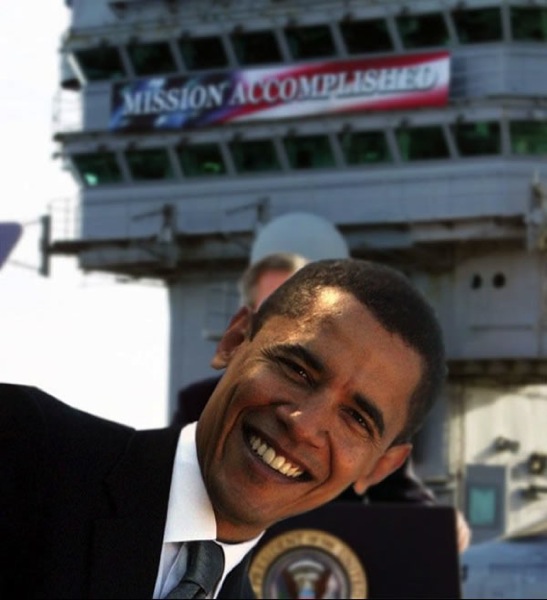 
I am not sure what Obama is aiming for?  But am now certain the election win by Maliki triggered the use of ISIS to help bring about the Obama administrations desired results.


“It’s going to be very interesting to see the impact of this crisis on  that process,” the official said.


There you have it! The crisis was created to impact the election process.
The thumb screws being applied is more then clear in the paragraph below


The crisis was of course, ISIS coming to life- all of a sudden like

"Asked about a risk of the security situation on the ground getting out of hand while the administration waits for political movement, the official said, “That line may well exist. We’ll know it when we see it.” Obama, he said, has ordered military options prepared to “get ahead of” the line and to allow for quick action, if necessary"


This is very clear, to me, that ISIS is a terror asset controlled by, for simplicity, the US. The administration will be able to 'get ahead' of the line and act quickly should it become necessary.

Just another example of when an election doesn't go in the direction the US wants, the US ignores, derides, or worse enacts a regime change- That  indeed looks to be the situation


Nuri al-Maliki finally bowed to pressure with Iraq and beyond on Thursday and stepped down as prime minister, paving the way for a new coalition that world and regional powers hope can quash a Sunni Islamist insurgency that threatens Baghdad.

Bowed to pressure with Iraq and beyond. Yes, pressure from the US proxy terror army ISIS.

One last item: the US administration must have been aware that Maliki, the rightfully elected leader of Iraq, was going to step down, because suddenly the Yazidi crisis is not a crisis anymore
Covered that in an update in yesterday's post

The Obama administration had been weighing the use of U.S. ground forces and aircraft to mount an emergency rescue

That strategy depends on the formation of a new Iraqi government

If the agenda is to save beleaguered persons under siege from 'terrorists'
what does the formation of a new government have to do with it?

The obvious answer is nothing-

The wool wasn't pulled over my eyes, or my savvy readers eye's either!
Iraq,as I have been aware of it my entire life, is done.
Posted by Penny at 6:17 PM

Email ThisBlogThis!Share to TwitterShare to FacebookShare to Pinterest
Labels: Iraq