Had this saved for last week, but, I got sidetracked with the whole Parliament Hill psychological operation......I'm over that, for now.


Pay attention to the pipeline mentioned in this article? It's one that has been discussed on numerous previous occasions here. The last time, just last week, in this post: US planning to bomb Syrian infrastructure (oil pipelines) to halt jihadists' funding
Keep in mind the BRICS alliance when reading this piece below
BRICS and the "Arab" Pipeline loom large here


The U.S., and Saudi Arabia must have greater economic and diplomatic relations with Oman. This is possible by assisting in the construction of a pipeline with Oman to India from the port of Duqm, Oman on the Arabian Sea. Oman is vital to the West because it connects Saudi Arabia, and the Gulf nations to the Indian Ocean. Its coastline extends hundreds of miles south of tension in the Persian Gulf.

Which means it allows for Iran to be shut out.


Oman holds great potential with regard to Asia and the West because of its possible role in passage from the Mediterranean and Middle East to the Indian Ocean. Oman is unobstructed by conflict. This is extremely vital considering the lack of stability in the Suez Canal, Gulf of Aden, and the Persian Gulf.

Oman is unobstructed by conflict? So is Iran, presently. Perhaps that will not be so in the future?
So, is this the plan to deal with the years of endless war the NATO nations and Israel have planned for the Middle East? 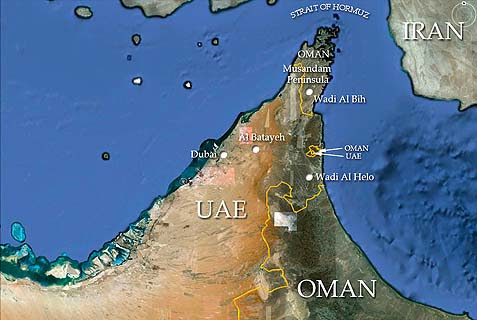 As the U.S. becomes more self-sufficient with regard to domestic energy supply, it must aid peaceful nations in the Gulf in discovering markets of future value to assure freedom of conflict as well as Islamic radicalism. Fortunately, Oman and other countries in the GCC are seeking projects that will further their wealth. Prosperity, economic production, and transparent leadership are what is needed to draw youth, and those tired of political stagnation away from support for ISIS, Al Qaeda, and other terrorist organizations. In past decades, Oman has struck a diplomatic balance between Saudi Arabia, the West, and Iran. It (Oman) has been wary of Saudi Arabia because of past conflict over regional hegemony. However, Iran’s recent treatment of countries in the Persian Gulf, especially Bahrain, has mirrored that of China in the South China Sea. If Oman can have greater relations with the West, they will be less enticed to rely on Iran for economic partnerships. Both Oman and Iran have discussed the possibility of an India-Iran-Oman triangle.

The western stick or carrot? Which shall it be for Oman?  See Oman and Iran have discussed a possible pipeline to India.....
Horrors, Iran making deals! The US should propose or coerce a better way, so suggests the Jewish Press oped


The U.S. and Saudi Arabia should pose the benefits of constructing an underwater pipeline from the central port of Duqm instead. A Saudi-U.S.-Oman partnership is politically stable, solidifies a pro-Western stance among Gulf nations, and forges greater connection to India, (NATO/Israeli influence/ breaking about the Brics)  the largest democracy in the world. In addition, the construction of an Oman-Indian pipeline would assure Oman would greater security and protection by the West,(Protection? like a gangster run protection racket) and better relations with their neighbors, Saudi Arabia. Existing infrastructure from the Trans-Arabian and Arab pipelines can help accommodate for a new transport route from the Mediterranean to the Indian Ocean.

The Trans Arabian & Arab pipeline- Also known as the Shi'ite pipeline- Use some of the existing infrastructure, bomb that which joined the Shia nations as the US is doing present day with their NATO/GCC allies, reroute it in a more politically manipulative manner and voila! Global domination and control can be NATO/Israel's- as they "protect" Oman from.....NATO and Israel

Oman is a necessary element in cementing this route. Since 1980, Oman has been an ally of the U.S., and allows military access to its bases and ports. Currently, it has worked with the U.S. in creating a defense shield against Iran. There is also the potential of a U.S. constructed defense program capable of intercepting Iranian missiles in and out of the earth’s atmosphere designed specifically for the Gulf nations, including Oman. As with other countries in the Middle East, radicalism poses a major internal threat.

One can argue that due to its support of the Assad regime, Iran is to blame for the rebellion of the Sunni majority in Syria, resulting in ISIS. ( No one could argue that nonsense. It's way too absurd!) Oman should be wary of Iran’s military and economic support in proxy wars. The Houthis, a radical Shiite group, has just co-opted power with President Abed Mansour Hadi in neighboring Yemen. They have acquired a state within a state, similar to Hezbollah in Lebanon. The Houthis are a prime example of how Iran maintains proxy wars. The Houthi conflict could potentially “boil over” into Oman.


Yemen, already a hotbed of insurgency, as well Somalia, its neighbor across the Red Sea, have effectively closed off trade in this region, making the Suez Canal ineffective as a transport route. It is likely that Iran may close off the Strait of Hormuz as well, cutting off diplomatic ties with Oman in the process. Although Oman has recently partnered with Iran regarding new diplomatic and economic projects, they have done so with the Saudi Arabia as well. Bank Muscat of Oman recently hosted a conference featuring infrastructure and small business projects with Saudi Arabia. Bank Muscat also seeks to strengthen its economic investment among other Gulf nations as well. The largest joint infrastructure project currently underway between Oman and Saudi Arabia is the Oman-Saudi Arabia highway project. This $5.3 billion dollar project is aimed at promotion of trade and tourism and transfer of petrol products between Oman and Saudi Arabia. It bypasses the expansive Empty Quarter desert, cutting the distance from cities in western Saudi Arabia to Oman’s coast nearly in half. Although vital to the region, Oman’s regional influence has its limits. Tension regarding Iranian nukes, and the ISIS conflict challenges Oman’s ability to maintain its current alliances. The West, Saudi Arabia and other Gulf nations will have to find alternatives in gaining access to the Indian Ocean. In 2012, U.A.E. in preparation of this possibility, constructed a pipeline to the Gulf of Oman in order to bypass tensions in the Persian Gulf. Although Western involvement in the Omani port of Duqm poses potential limits, its benefits outweigh its setbacks. Oman, wary of the possibility of conflict to its north, is developing infrastructure and pipelines at the port of Duqm, hundreds of miles south of the Persian Gulf, and the ISIS conflict. Oman is talking to U.A.E. and Saudi Arabia about construction of connecting pipelines to Duqm. Now is the time for the U.S. and Saudi Arabia to optimize relations with Oman. For the sake of a better, more conflict-free global economy, a pipeline connecting Oman with Saudi Arabia and India presents the perfect opportunity.

Come on! A conflict free global economy? Not a way in hell that is the goal. If anything this plan is an obvious set up for yet more conflict!
Posted by Penny at 8:57 AM