All early reporting has masked gunmen opening fire in a low income/ alleged crime ridden housing project. It appears that a specific police officer may have been the target. Which is interesting, of course. Keeping in mind that cop who suddenly decided he had to kill himself immediately after the Hebdo incident Or perhaps the masked men just shot into the air?

Lots of pictures of police- no imagery thus far of alleged shooters?


Hooded gunmen armed with Kalashnikov rifles have fired on police in the French city of Marseille.

Elite police troops were being sent to the scene, in the northern suburbs of the Mediterranean port city, after the shots were fired

Witnesses say there are now heavily armed police swarming the area where the shootings took place.

The gunfire was heard in the Castellane area of the city with witnesses saying the armed men fired Kalashnikovs into the air.

"There is a very high murder rate but almost all the murders are gang-related. Very few victims are civilians."

Witnesses say about about 40 heavily armed elite security force officers are in the area. 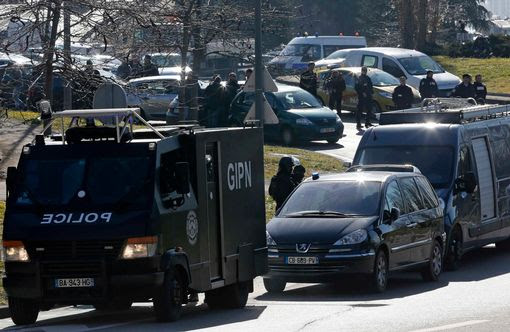 
Reports suggest shootings could be gang-related

The shootings have resulted in 7,000 people in the Castellane area of the city being told to stay inside.

A nursery has been evacuated and a school is also in lock-down.

The gunfire is said to have happened at 10am local time when security officials were checking that the area was safe before the prime minister’s visit.

Witnesses say riot police are blocking off access to the housing estate as they continue to search for the gunmen.

Samia Ghali, a senator from the region, told iTele that she spoke with the police director and was told that the gunmen were targeting police and also firing at random.

So far, there have been no reports of any injuries.

It is being reported that the gunshots were targeting Pierre-Marie Bourniquel, the local police chief who was due to meet Manuel Valls, the Prime Minister, later today.

Mr Bourniquel, Marseille’s director of public safety, was accompanying officers who were attended the scene of suspected shoot-out between rival gangs.

Bullets narrowly missed their vehicles, while at least one policeman ‘lay on the floor of the car’ to insure he was not hit, said a local police source.

It is thought that those involved in the original gun fight numbers around 15, and had been involved in a turf war for many months.

'No plans to cancel PM's visit'
It appears that the French Prime Minister Manuel Valls will still visit the city this afternoon.
Mr Valls has been at the forefront of a vast clampdown on suspected Islamic terrorists following the Charlie Hebdo terrorist shootings in Paris last month.
He had not yet arrived in Marseille before the shooting, and there were 'no plans to cancel his visit', a source said.

More police on the scene


Elite police troops were being sent to the scene, in the northern suburbs of the Mediterranean port city, after the shots, the source said by telephone.

So maybe it's drug related. Or perhaps the French state just wants to keep the tension high and justify big law enforcement budgets? It could be just that!