We're going long, I've been working at this one for a few days now.  Mosul is ominous. The US plans for Syria don't look to be peaceful either. But then they never have been.


Iraqi officials tell me the operation to liberate Mosul began in March, and will pick up pace in the coming months. One suspects U.S. President Barack Obama would also like to see mission accomplished before he leaves office.

Despite the spin of the perception managing media, indeed, the move on Mosul has been in the process for months- It wasn't off my radar. Having written several posts on the subject beginning:
April 21/2016:  Gearing up for the Annexation of Mosul. Destroying Iraq &; Maybe Mosul Dam too! More recently: May 18/2016  The US Push to Recapture/Annex Mosul- Fact over Fiction With quite a bit of information posted in between. Mosul has not been far from my mind.

John Cantlie is no ISIS Hostage

He's clearly a spook masquerading as a journalist.  Much like Marie Colvin-  Recall her? I certainly do! Marie Colvin's name has been back in the news recently. Family of Marie Colvin, Slain U.S. Journalist, Sues Syria Which has caused an upsurge in visits to the blog of  interested persons reading up on Marie Colvin.  Marie never met a terrorist she didn't run amok with. Nor did she miss a destabilization. From Egypt, onto Libya, meeting her demise in Syria. Or so the story goes??? If you are interested in this perpetrator of crimes against humanity, I've relinked some of the older posts regarding Ms Colvin- below her picnic with terrorists picture.

I'm not going to spend too much time on her story, except to say this: Miss Colvin ran with very bad people, terrorists in fact,  and she was in Syria because she had her spook self smuggled into Syria in order to spin lies and deception about what was really happening in Syria. No sane judge should award her family a dime. However the judicial system is most likely full of corrupt/ contemptible and compromised judges. So, we can't hold our breath for any real justice- Just think about Hillary getting her 'get out of jail free card'?

Let's now move on to John Cantlie:
John Cantlie, interestingly appears in Mosul, Iraq: He is recounting the damage done by coalition bombings to that vibrant city- In particular the university of Mosul.
This is not an ISIS propaganda video, it is in fact a coalition video, proclaiming their evil and oppression to all- Proud that they've smashed Iraq!

'If you look behind me you'll see it's been pretty much smashed to pieces. You have to ask yourself: ''Why did the Coalition decide to destroy the university?''
'The level of destruction is absolutely massive. Mosul University was the biggest and finest in all of Iraq.
'If it was a military point or a weapons cache or a training ground for the mujahideen perhaps you could understand - but it was simply Mosul's and Iraq's finest university, now reduced to a huge pile of rubble.'


Yes, the coalition did bomb Mosul University! I covered that information in the third installment  of  series of post on the Operation to Annex Mosul:  Pt.3 Iraq’s Maidan Spring- Operation Annex Mosul is Well Under Way

* Mosul University was bombed with ninety two deaths and one hundred and thirty five injuries. Earlier estimates were higher, but many were pulled from the rubble alive. "They were students, faculty members, staff members, families of faculties, and restaurants workers."


As I've been saying for months now the coalition of the killing has been decimating Mosul in advance of the final onslaught that will see it annexed from Iraq. Forcibly. To become Kurdistan/Israel 2.0. I had  saved the article from the Economist late last week, but, got side tracked by Dallas and all the race baiting! Before we get to that article, a brief refresher:

It's been discussed here that the "Kurds" are not one big happy family- Rather they are a dysfunctional bunch, who can't even agree on just who or what a kurd is. There are multiple factions working against one another- However the thugs in the PKK  may have abused/displaced and stolen the children of enough Kurdish persons, that the rest will accept the tyranny? 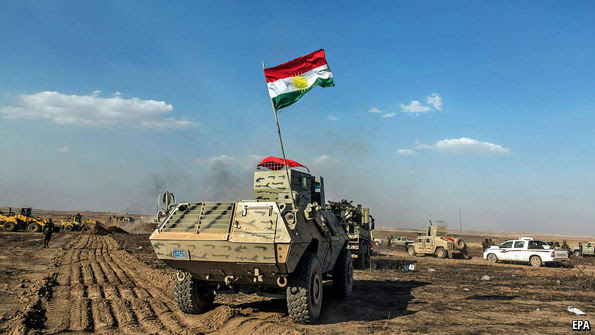 PESHMERGA militiamen pile armchairs and sofas high on a removal van as they decamp from the dam above Mosul (good if it collapses, no?) to the plain below. Mosul, Iraq’s second city and the nerve centre of Islamic State (IS), lies in their sights. Thanks to coalition arms, training and air power, the peshmerga, Iraqi Kurdish troops whose name means “one who confronts death”, now surround it on three sides.  Together with Baghdad’s army, they are also closing in from the fourth side, the south.


Yup, as has been said repeatedly here- The 'poor beleaguered kurds had the big guns behind them. Neither the coaltion or the PKK want the Iraqi army in Mosul- they are in a dangerous position being south of Mosul- Very dangerous


“Whatever we take, we hold,” says a peshmerga intelligence officer, surveying IS dugouts from a trench on the front line.
For 28,000 square kilometres (11,000 square miles) behind him, Kurdish flags now fly over the remains of deserted and destroyed Sunni Arab villages and towns. (that's ethnic cleansing boys and girls and it's been covered here- repeatedly. I don't cheer for NATO's mercs) Time and again, the peshmerga have chased the jihadists out. In Syria, too, Kurdish forces boast similar gains. Thanks to the war on IS, they control some 600km of Syria’s 800km northern border with Turkey. (KurdIShIS) In March they declared their own autonomous region there, Rojava. In Turkey and even in Iran, Kurdish armed groups have ended years of ceasefire and taken up arms. Rarely in their century-old bid for statehood has the dream of carving a Kurdistan from the rumps of four states appeared so nearly within reach.

As I've stated repeatedly- It was the Kurds that broke the ceasefire in Turkey- Sadly the disinfo spreaders had more voice then I :(  As for Iran- It's been covered a number of times here that the Kurds have taken up arms against the Iranian gov. This past Monday was just the most recent coverage of yet another attack: Iran’s Kurds Now Growing Restless?? Kurdish Mercenaries Attack Iranian Gov. Officials

Back to the Economist:


Mayhem in all four has helped their cause. ( cui bono? ISIS shock troops tag teaming with Kurd land grabbers) In Iraq the area ruled by the Kurdistan Regional Government (KRG) has been beyond the effective control of Baghdad since 1991; only Kurds over 40 now speak Arabic there. Having struck oil, the KRG’s leaders sell it independently of Baghdad, exporting it through their own pipeline to Turkey. “Iraq is over,” says Heman Hawrami, a confidant of the KRG’s president, Masoud Barzani. “Statehood is the only practical solution.”
Yet if so, why do they delay declaring it? In a referendum in 2005, 99% of KRG voters chose Kexit. A decade on, Kurdish officials say they need a second vote, but will not name a date.
Infighting is the main reason for delay. Having taken back control of their territory (never their territory) in Iraq and Syria, the Kurds have proved incapable of sharing it. The alphabet barely has enough letters to cover the acronyms of all their quarrelsome factions. A Syrian analyst counts 45 in Rojava alone. In Iraq there are almost as many.

I've talked about this infighting as already mentioned. Here are two posts with links back to still more posts:  Bye Bye Barzani. Hello, Israel 2.0 aka Kurdistan & The end of Iraq is Nigh: Gorran Leader Nashirwin Mustafa returns from London.
And their are likely still more posts- Long term readers are surely familiar- Others can use the labels below to find more, many  more posts on this subject.
The quarreling has been and is in the process of being crushed by the PKK

Continuing with the Economist:


Instead, on either side of Iraq’s northern border with Syria, Kurdish militias now train their guns on each other, hungry for control of the territories and oilfields they have captured from IS or the Assad regime. The People’s Protection Units (YPG) hold Rojava as well as bases in Mount Sinjar, west of Mosul, on Iraq’s side of the border. Opposing their advance, Mr Barzani has cobbled Syrian Kurdish exiles into his own “Rojava Force”. “We’re upholding Sykes-Picot borders,” says one of its commanders wryly, using the shorthand for the partition of the region into various Arab states but not a Kurdish one. (Like I said, no Kurdish lands, ever)

Western support for the Kurds, too, has its limits. Since 1991, when the UN set up a modest Kurdish haven in Iraq’s snow-capped mountains, Western powers have been the Kurds’ guarantors.

But in their single-minded focus on IS, they have turned a blind eye to Kurdish infighting, sent copious arms and provided the air cover to expand Kurdish control in Syria and Iraq. A slew of Arabic towns have acquired Kurdish names. (Kobani, the Kurdish name for Ain al-Arab, is said to derive from the mispronunciation of Company, after the railway contractors who worked there.) “The US is subsidising Kurdish bad practices,” says Bilal Wahab, a Kurdish academic in Sulaymaniyah.

Why yes the US is subsidizing Kurdish very bad practices. Very, very, very bad!!
Of course the economist article continues on- You'll have to read it for yourself-

Don't Miss: There is sure a lot going on. Too much of it can go very wrong