Tesla’s driver was too busy watching Harry Potter and Google’s insanity knows no boundaries!
Gives a whole new meaning to the term vehicular manslaughter, no?

You understand that a zombie is dead/alive?  That is how I see people who rely way too much on technology Zombified. Zombie. Zombificated.  And if that offends you? Good! I’m glad that I have offended you. Perhaps it will get you easily offended persons thinking about the bad impression you leave on us non- zombie/ really alive people? When you choose to rely on not so smart technology instead of your own smarts- The smarts that have helped humanity survive for thousands and thousands and thousand of years! The smarts that have really stood the test of time are already yours to use. So use them!


Pay particular attention to the FACT that this accident took place MAY 7/2016. Yup, two months ago!  Also notice that the media finally decided to report on this significant incident the long July weekend in both Canada and the US
CBS


Joshua D. Brown, 40, of Canton, Ohio, died in the accident May 7 in Williston, Florida. According to a Tesla statement issued Thursday, the cameras on Brown's Tesla Model S failed to distinguish the white side of a turning tractor-trailer from a brightly lit sky and didn't automatically activate its brakes. Brown didn't take control and activate the brakes either, Tesla said.

I feel for this man's family. His over zealous belief in obviously flawed technology has caused them a whole lot of real world pain and anguish- Sadly he chose to be careless.


Brown was an enthusiastic booster of his 2015 Tesla Model S. In an April video he posted online, he credited its sophisticated Autopilot system for avoiding a crash when a commercial truck swerved into his lane on an interstate.

“ People can quickly learn to rely on them, or assume they work better than they actually do. The possibility of a fatal accident was always a concern”

"For years people have been saying the technology is ready, and it's one of my pet peeves, because no it's not," said Bryant Walker Smith, a law professor at the University of South Carolina and an expert on autonomous driving issues.

Karl Brauer, a senior analyst with Kelley Blue Book, said the accident is a huge hit to Tesla's reputation.

Good thing  for Tesla the media buried the story. Too bad for Tesla that people like me will cover this.

“The accident could increase public skepticism about semi-autonomous and autonomous driving. In a survey released last month by the University of Michigan, two-thirds of drivers said they are moderately or very concerned about riding in a self-driving vehicle. Just 16 percent of the 618 drivers surveyed said they would rather ride in a self-driving car”

I would NOT drive in a self driving car.

And isn’t it interesting that this zombie died in his driverless car in May, while most likely watching a Harry Potter movie- Talk about distracted driving!

DVD player found in Tesla car in fatal May crash

A digital video disc player was found in the Tesla car that was on autopilot when its driver was killed in a May 7 collision with a truck, Florida Highway Patrol officials said on Friday.

Whether the portable DVD player was operating at the time of the crash has not been determined, however, and witnesses who came upon the wreckage of the 2015 Model S sedan gave differing accounts on Friday about whether the player was showing a movie

A man who lives on the property where Brown's car came to rest some 900 feet from the intersection where the crash occurred said when he approached the wreckage 15 minutes after the crash, he could hear the DVD player. An FHP trooper on the scene told the property owner, Robert VanKavelaar, that a "Harry Potter" movie was showing on the DVD player, VanKavelaar told Reuters on Friday.

Since the man who was immediately at the scene reported the Harry Potter movie playing when he approached the wreckage I accept his accounting over that of anyone else who arrived some unknown time later at the scene.

Thankfully the only person that died was the zombie driver. However let’s consider the possibility that this zombie and other zombies could be happily not paying attention while “operating”  their driverless car and wipe out an entire family- Or cause a massive pile up on a busy highway? Then what?

The media by the way- The misleading  media and the police have been doing a good job of sweeping these occurrences under the rug- I’ve covered this previously with google cars.
Google's Self Driving Cars Are Getting Into Accidents
Where the police are not called and google reports the accident after the fact while the media keeps the story on the QT (Off the record, on the QT, and very hush-hush." )for months! So convenient for google and Tesla..

Speaking of Google's cars getting into accidents (obviously more often then their admitting)
: Google patents 'sticky' layer to protect pedestrians in self-driving car accidents
I’ll highlight the interesting language readers and include the nice feel good diagrams the Guardian included in their coverage


Google has patented a new “sticky” technology to protect pedestrians if – or when – they get struck by the company’s self-driving cars.

The patent, which was granted on 17 May, is for a sticky adhesive layer on the front end of a vehicle, which would aim to reduce the damage caused when a pedestrian hit by a car is flung into other vehicles or scenery.

Ideally, the adhesive coating on the front portion of the vehicle may be activated on contact and will be able to adhere to the pedestrian nearly instantaneously,” according to the patent description.


“This instantaneous or nearly-instantaneous action may help to constrain the movement of the pedestrian, who may be carried on the front end of the vehicle until the driver of the vehicle (or the vehicle itself in the case of an autonomous vehicle) reacts to the incident and applies the brakes.”

“As such,” it continues, “both the vehicle and pedestrian may come to a more gradual stop than if the pedestrian bounces off the vehicle.” 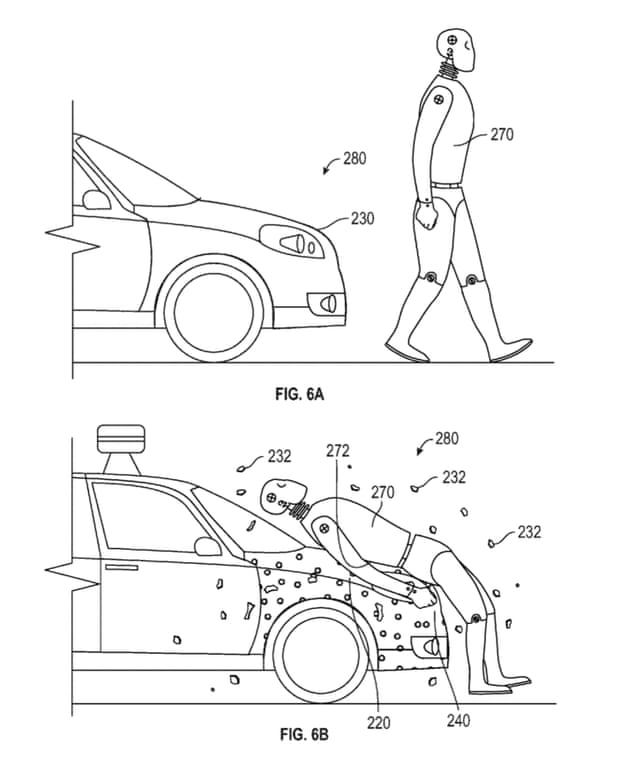 After your head has bounced off the windshield sustaining a severe brain injury and massive lacerations- You, may be stuck to the vehicle, as it drives into another car? A train? A wall? More people?  This is insanity people!!!!