Rallying the masses in multiple locations- Including in Diyarbakir

By 2pm GMT, Istanbul’s Yenikapi Square was a sea of red and white Turkish flags with many taking part wearing headbands emblazoned with Erdogan’s name.

A huge banner declared “the victory is democracy’s, the square is the people’s”

The rallies were not limited to Istanbul and the capital Ankara. Thousands rallied in the popular tourist spots of Izmir in the west, Antalya in the south and Diyarbakir in the restive south-east.

Prime Minister Binali Yildirim appeared briefly on stage in Istanbul before the start of the rally, waving to the crowds after opposition party leaders arrived and shortly before Erdogan appeared with his wife, Emine Erdogan, on stage.

The crowds observed a minute’s silence before a rendition of the national anthem opened the rally followed by readings from the Koran.

More than 2 million people have gathered in Turkey for a "democracy and martyrs" rally to condemn the failed coup attempt on July 15.


More than a million Turks have joined an Istanbul rally called by President Tayyip Erdogan to denounce a failed coup - a show of strength staged in the face of western criticism of widespread purges and detentions. 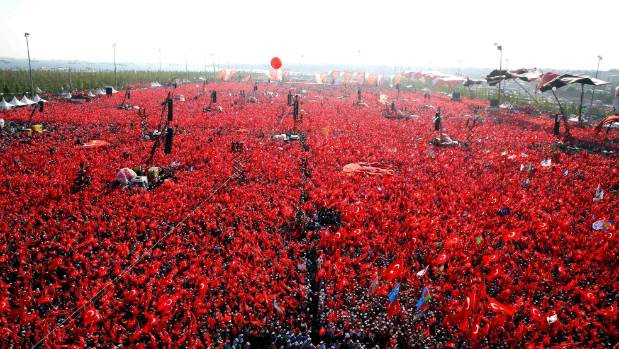 Amid the cooling of ties with the west, Erdogan is due to meet Russian President Vladimir Putin on Tuesday in St Petersburg for talks intended to end a period of tension after Turkey downed a Russian fighter jet near the Syrian border last November.

"At the talks with my friend Vladimir, I believe, a new page in bilateral relations will be opened. Our countries have a lot to do together," Erdogan told the TASS news agency in an interview published on Sunday.

Mr. Erdogan’s visit comes amid tension with the U.S. and the European Union over his government’s mass arrests of suspected coup plotters, and brings together two leaders whose ties with the West are frayed.

NATO concerns do not appear to be the concerns of the Turkish people.


The two are also struggling with flagging economies and the trip is expected to focus as much on business as geopolitics, according to Turkish officials.

Turkey and Russia are not alone in the flagging economy department cause the US and Canada are in the dumpster also...

But the trip also allows Ankara to send a message to the U.S. and European Union about what it views as the West’s lack of empathy over the coup attempt, said Sinan Ulgen, the chairman of Istanbul-based foreign-policy think tank Edam.


The trip, the 'my friend Vladimir' comment, the unity rallies are all messages to the West!

Warmer ties could also revive talks on a natural gas pipeline to Turkey that could boost Ankara’s long-held ambition of becoming a hub for gas heading to Europe. Mr. Putin announced plans for the pipeline, known as Turkish Stream, during a trip to the country in December 2014.

Speaking at a press conference with Kazakh President Nursultan Nazarbayev in Ankara on Friday, Erdoğan said: "We are going to leave the sour period behind and return to our old relations."

Regarding the agenda of the Aug. 9 meeting, Kalın said that the two leaders will discuss bilateral relations and regional challenges, including counter-terrorism and the Syrian crisis. "This is a time when national and regional issues have global implications. In other words, it is no longer possible to clearly separate national, regional and global issues from each other; requiring us to assume a global and holistic perspective," he said.


A female intelligence agent from the United States has been saved by Turkish Armed Forces (TSK) soldiers after a two-day operation on the Syrian border, according to a report.

The US sent drones and helicopter but did not locate her - She simply made it to the Turkish border and the guards delivered her to US hands- She was very clearly in contact with US officials at all times. Who she was, what she was up to, is all unknown- However we can be certain she was up to no good and she was not there to benefit Syria or it's people. If this is near the location of the Russian jet shoot down did she have anything to do with that incident? Were other Americans in the area? Were they connected to the jet shoot down? Questions that need to be asked? And I do wonder what the answer to them might be?

The U.S. agent, whose name was not revealed as she was on a confidential operation, was assigned to a task in Syria and wounded on Aug. 3, after which she called for evacuation. She reportedly sent her coordinates to U.S. officials, allowing them to determine her exact location.

She was determined to be in the region of the Turkmen Mountains bordering the Yayladağı district and an operation was launched to save her.

She was initially told to approach the Turkish border, as U.S. officials contacted the Turkish General Staff to coordinate throughout the rescue operation.

Two U.S. drones scanned the area for two days, as two U.S. helicopters were on standby on the Turkish side of the border. However, the agent and U.S. officials were unable to meet, despite all efforts, according to the report.


As the search was ongoing, Turkish border soldiers noticed mobility in the region. The soldiers then realized that there was a person near the border and gave a warning, prompting a wounded woman, who turned out to be the sought U.S. agent, to shout that she was “a friend,” while holding her hands up.

She was taken to the army border post by the Turkish soldiers and the situation was reported to the prosecutor’s office.

The wounded agent was delivered to U.S. officials and then taken to the İncirlik Air Base, used by U.S. forces, in the southern province of Adana.

I have serious doubts these were civilians- Or if this actually happened? If there is a grain of truth to the report it's more probable these were PKK/YPG fighters used to crossing the Turkish border freely. Why would Syrian Kurds flee Rojova?

“The victims were trying to cross the border into Turkey after escaping the Qelika village in the Kurdish Afrin district. But the merciless Turkish forces shot them, killing a 35-year-old man [identified as Ahmed Abdo] and injuring at least two others,” said Walida Hassan, head of Human Rights Commission in Cezire canton in northern Syria.

“We hereby demand the international community to intervene and stop the Turkey’s violations against basic human rights,” she said.

That's an interesting demand, no?


Turkish government continues building the separation wall along its borderline with Syria allegedly for security reasons and to prevent terror attacks.


In early 2015, Turkey closed its border to all but seriously injured Syrian asylum seekers.

When Turkey tried to keep the border better controlled the US, coincidentally, began massive airdrops of arms and more into Syria- They also started to use the passage way between Iraq and Syria at Sinjar, in particular.

The  wall building, the  thwarted coup attempt, this show of unity, along with the upcoming meeting with Russia make it very very clear that Turkey's leaders, as I've stated, are aware of the NATO backed destabilization plan against Turkey- The destabilization plan I first wrote about more about 20 mos ago! (And if I could get a general sense of what was coming, you can bet the Turkish leadership was aware well before that!)
November 19/2014: Kurd/ ISIS Symbiosis- The impending destruction of Turkey.  & November 21/2014:  Pt.2- Kurd/ ISIS Symbiosis- The impending destruction of Turkey
and so very many more posts including  November 26/2015:Carving Turkey After a NATO Roasting- Claims vs Reality There are literally 100's and 100's of posts here on the related topics of Turkey, Syria, Kurdistan etc.,