Yes, Turkey has built a good sized, height and length, wall on it's border with Syria. I've mentioned this reality on several occasions. Turkey began construction more then a year ago..

Where there is no wall, there will be trenches or massive barbed wire fences. Claims that Turkey has done nothing to secure it's borders just don't ring true. As I've stated once Turkey began tightening border security the US and company began airdropping arms to KurdIShIS. Or arms were brought into Syria via Iraq. Both of these truths ignored to continue pushing a simplistic narrative-


Briefly- Turkey has been cutting off KurdIShIS supply lines for a while now- Covered previously at the blog. This is most likely the reason we recently had reports of the US dropping tons of arms to Kurdish militias in Syria.

Sadly, simplistic memes rule no matter how incorrect they may be.  Still we can connect the  beginning of airdrops to Kurdish terrorists PKK/YPG and the smuggling through Iraq with the increased security at the Turkish border
Speaking of simplistic memes..... Kurds: Betrayers Are Often Betrayed- Victims of and Parties to Conflict

Truth Exists, it's based in reality. Below is some reality. Within this framework, Turkey has erected a 239-kilometer-long (148.5 miles) fixed concrete wall at the border with Syria and is planning to build another one, 207-km-long (128.6 miles).

Concrete wall for more then half of the border

It has also completed the construction of 57 concrete watchtowers at the border regions in the Gaziantep and Kilis provinces and has modernized many existing towers with day-and-night surveillance systems.

In line with demands, authorities have declared temporary military security zones in 47 regions, while one region was declared a special security zone.

I live quite near the US/Canada border. There is nothing like what is mentioned above going on in Niagara.... Beginning with an 8 kilometre long wall in Hatay province

Turkey has started building a new wall along a fragment of its southeastern border with Syria as it struggles against smuggling, illegal migration and the threat from al Qaeda fighters among Syria's rebel ranks.

The Wall in Hatay Province is now 239 kms long Turkey has built a 239-km wall in Hatay province on the border with Syria for enhancing its security, Anadolu Agency reported Aug. 22.
The newly built wall is three meters high and two meters wide, according to the agency.

Drastic action: Construction begins on a high-security border fence between Turkey and Syria, pictured in the town of Reyhanli today, in Hatay province.. 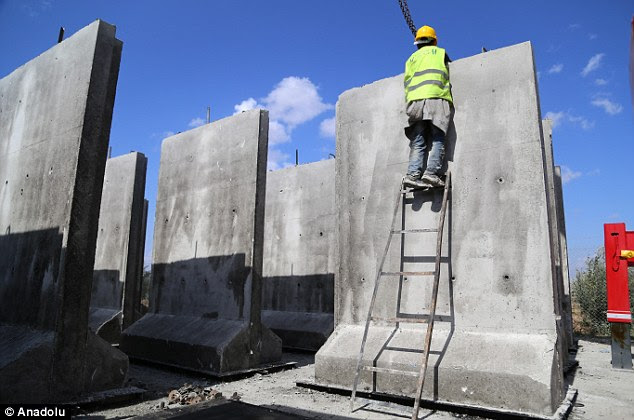 The latest  portion of wall construction is taking place at Ayn Al Arab or Kobane:

In my world Ayn al arab is Syrian territory, not Kurdish. And the name of the town is Ayn al Arab- not Kobane. Since the msm and alternative have already erased the actual name of that town from the collective memories of the masses I’ll use both names, but, will opt for the correct name of the town first- Ayn Al Arab. (Kobanî , officially Ayn al-Arab) My presentation  of this material in this manner is in line with that of John Kerry and Sergei Lavrov: Both of whom have informed us they stand for a unified Syria and not an 'independent' Kurdistan

Yesterday the Kurds were claiming the Turks were going to attack Ayn al Arab aka Kobane- this was utter nonsense from what I had read, because the Turks were building another section of their border wall! Verified today by the Kurds themselves..

It appears a generous handful came out to protest- I see about 30 in the pic included with the coverage:

The Turkish authorities started building a barrier wall on its southern border.

The Rojava Self-Administration issued a statement condemning the Turkish barrier wall project, and called on the international community to take action and stop the Turkish violations on the border with Syria.

“The Self-Administration in the Kobane canton condemns this aggression by the Turkish state against the people of our region. We appeal to the international community to break its silence and put pressure on the Turkish government to stop those violations,” it said.

We gathered here today to condemn the barrier wall project launched by Erdogan and his government,” Zaibar Kurdi, one of the Kobane protesters.

This is not the first time for Turkey to build such a barrier wall on its borders with Syria’s Kurdish region. A similar wall has been built near the cities of Qamishli, Derik and Afrin.