Israel - Annexing all of Golan via their Terror Proxies. Demolitions/Harming Druse 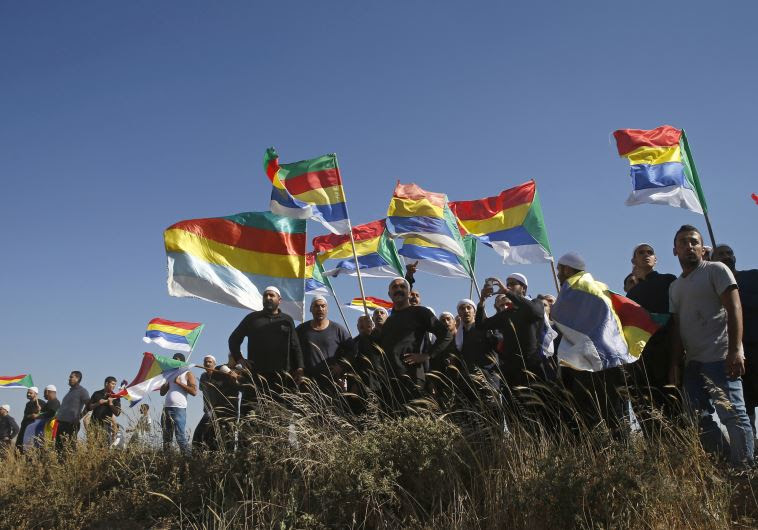 Kulanu MK Akram Hasson issued a harsh rebuke of the IDF on Monday, saying that not only is the army not helping the Druse population  caught up in Syria's civil war, it is cooperating with the Nusra Front, al-Qaida's Syrian affiliate.

Hasson's comments in an interview with Channel 2 came amid fierce battles in recent days near the Druse village of Khader in the Syrian Golan Heights.

Hasson accused Israel of being responsible for harm being caused to the Druse population of the Syrian Golan. "The IDF is shelling Syrian army positions, which is enabling the Nusra Front to seize Druse land."

The Kulanu MK further charged that "it is no secret that the IDF is cooperating with [the Nusra Front]. In the past they have told us that the Nusra Front coordinates with the IDF. We don't know? What, were we born yesterday?"

"Today, after they took control of the most strategic positions and after the Syrian army left the area, they blocked the access road to Damascus, and isolated Khader from the rest of Syria, and they are slaughtering people," he added.

Most likely AQ is slaughtering people on Israel's behalf.


The village of Khader, which is right across from Majd al-Shams, on the other side of Mount Hermon, is home to some 25,000 Druse.

The Nusra Front has sought to control (K)hader for some time in order to gain control of the entire Golan Heights. The al-Qaida-linked fighters number several hundred men as well as dozens of tanks that they have seized.

This is all related to the past week of Israel regularly bombing Syria. Intentionally hitting Syrian Army.  This is the annexing of Golan- mentioned in many posts here! I seem to be the lone person covering this topic? (Direct me to others who are if you've noticed, please?)

Recent posts on this topic:


Israel demolishing homes in Occupied Golan for the First Time

Using the same tactics employed against the Palestinians


Israel, and, for the very first time, demolished a home in the Israeli-occupied Syrian Golan Heights on Wednesday, claiming that it was built without a permit, a Golan-based human rights group said on Thursday.

Al Marsad, the only human rights group operating in the Golan Heights, stated, according to WAFA correspondence, that hundreds of Israeli police accompanied bulldozers as they proceeded to demolish the home of Bassam Ibrahim in Majdal Shams, the largest town in the occupied Syrian Golan, under the pretext that it was built without a permit.

“This is the first time that the Israeli authorities have demolished a home in Majdal Shams,” said Al Marsad. “The destruction of this home marks the adoption of a new systematic policy of home demolitions by the Israeli authorities in the remaining Syrian villages in the Occupied Syrian Golan. The Syrian owners of dozens of other homes have been threatened with similar action,” it said.

Al Marsad accused Israel of preventing the Syrian population from building in their cities while encouraging and facilitating the construction and expansion of illegal Israeli settlements in the Golan Heights.

“As a result of the severe restrictions imposed by Israeli planning and construction committees, it is close to impossible for the Syrian population to obtain the necessary building permits. Therefore, the Syrian population is forced to build homes without building permits, as this is the only way to meet their housing needs given unprecedented levels of overcrowding,” said Al Marsad.

So familiar. Israel, ethnic cleansing and displacement, along with their terrorists partners in Al Nusra/AQ-- History repeats.