Just like their pals in Israel- Who are striking Syria at Golan. Again!

Syrian Army says US bombed them IN SUPPORT OF ISIS!!!!


The air strike killed Syrian soldiers and was "conclusive evidence" that the U.S. and its allies support the jihadist group, the Syrian army said in a statement, noting that the strike was "dangerous and blatant aggression".

I had a very strong suspicion something dramatic was going to occur today- As I had mentioned yesterday it seemed the US was being outed by both Turkey and Russia-
The actions of the Turkish backed rebels in outing special ops and the statements by Lavrov that made clear the US was supporting terrorists and generally up to no darn good!

Flashbacks!
The US had to appeared to be losing the upper hand in this situation. The battle for the hearts and minds of many was certainly being lost! And all ahead of election season too!

According to Syria’s official SANA news agency, the bombing took place on al-Tharda Mountain in the region of Deir ez-Zor and caused casualties and destruction on the ground.

“We are aware of the reports and checking with Centcom and CJTF (Combined Joint Task Force),” the Pentagon told RT.

The Russian Defense Ministry said on Saturday that the aircraft which carried out the bombings had entered Syrian airspace from the territory of Iraq.

Four strikes against Syrian positions was performed by two F-16 jet fighters and two A-10 support aircraft, it added.

“If the airstrike was caused by the wrong coordinates of targets than it’s a direct consequence of the stubborn unwillingness of the American side to coordinate with Russia in its actions against terrorist groups in Syria,” Konashenkov stressed.
The Defense Ministry also confirmed a report by SANA that an Islamic State offensive began right after Syrian Army positions were hit from the air.

"Immediately after the airstrike by coalition planes, Islamic State militants launched their offensive. Fierce fighting with the terrorists is currently underway in the area of the airport where for a long a time humanitarian aid for civilians was parachuted,” Konashenkov said.

The Syrian General Command has called the bombing a “serious and blatant aggression” against Syrian forces, and said it was "conclusive evidence" that the US and its allies support IS militants.

Earlier on Saturday, Russia accused the US of being reluctant to take measures to force rebels under its control to fall in line with the terms of the Syrian ceasefire.
Numerous Russian appeals to the American side remain unanswered, which “raises doubts over the US’s ability to influence opposition groups under their control and their willingness to further ensure the implementation of the Geneva agreements,” senior Russian General Staff official, Viktor Poznikhir, said.
Poznikhir also said that the truce is being used by the militants to regroup, resupply and prepare an offensive against government troops.


Damascus/Quneitra, SANA – The General Command of the Army and Armed Forces said that US alliance aircrafts targeted at 5 PM on Saturday a Syrian Arab Army position in al-Tharda Mountain in the surroundings of Deir Ezzor Airport, causing losses in lives and equipment and clearly paved the way for ISIS terrorists to attack the position and take control of it.
In a statement, the General Command said that this act is a serious and blatant aggression against the Syrian Arab Republic and its army, and constitutes conclusive evidence that the United States and its allies support ISIS and other terrorist organizations, stressing that this act reveals the falseness of their claims of fighting terrorism.

Later, the Russian Defense Ministry confirmed that the US alliance aircrafts that attacked the Syrian Arab Army position in al-Tharda Mountain are in fact American aircrafts.
The Ministry said in a statement that 4 American jet fighters (2 F-16 jets and 2 A-10 jets) entered the Syrian airspace across the Iraqi borders, and attacked a Syrian Arab Army position in al-Tharda Mountain in Deir Ezzor’s southeastern countryside, claiming a number of lives and injuring others.
The Ministry explained that the attack allowed terrorists from ISIS to take control of the mountain which is near Deir Ezzor Military Airport.


First thing I said to hubby this morning.. something  is going to happen today. Syria. Turkey. Something.. and yah, I know lots has gone up, but, I was thinking of a big upping the ante type move. Hitting Syrian troops is openly is that kind of move! 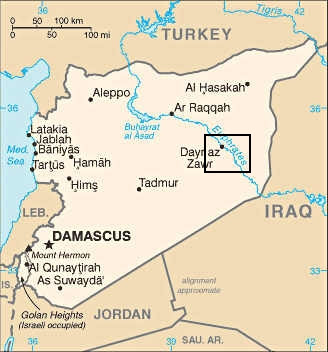 The Israeli desired Kurdistan aka Israel 2.0

The US Admits Carrying Out the Airstrikes that killed 60 Syrian Soldiers- headline
Washington Post:

— The Pentagon said Saturday it had halted an airstrike over Syria after Russia and the Syrian government accused U.S. warplanes of responsibility for killing 60 Syrian soldiers.\


In a statement, the U.S. military’s Central Command admitted it had been carrying out a strike against a suspected Islamic State position in the eastern province of Deir al-Zour, but said it called off the assault after Russia said it was Syrian army positions that were being attacked, and not the Islamic State.
Earlier Saturday, Syria and Russia had accused the U.S.-led coalition of striking a Syrian army base and blamed the raid for an Islamic State advance in the area.
Saturday’s developments come amid an already fragile cease-fire brokered by Russia and the United States

In other words the US made a 'mistake'.. That's an out and out lie! Bald/bare faced LIE!
They were assisting their thugs same as they have always done!
Recall a couple of weeks ago when I posed this question to readers here?


"How or why did  the U.S.-backed YPG fighters and the entire U.S.-led anti-ISIS coalition, of at least 50 countries, fail to clear ISIS from northern Syria even though they have allegedly fought and bombed the area for more than one and a half years??" Per the official narrative, of course!

This is why I am still sticking with my KurdIShIS symbiosis. It fits. It quite nicely explains the failure to clear ISIS. Clearing ISIS was not a goal. Ethnically cleansing and displacing the populace to remake the ME was always the agenda. ISIS the pretext- Kurd fighters part of the false/contrived good vs evil dialectic.