The Russian ambassador to Ankara was seriously wounded in a gun attack at a art gallery in the Turkish capital on Monday and was taken to hospital, NTV and other broadcasters reported.
Hurriyet newspaper’s English website said Ambassador Andrei Karlov was shot while making a speech and that Turkish special forces had surronded the building. NTV said three other people were wounded.
CNN Turk television said shooting was continuing in the building.
Russia and Turkey have been involved in conflict in Syria across the border from where over two million Syrian refugees have settled. Turkey has been a staunch opponent of President Bashar al-Assad while Russia has deployed troops and its air force in support of the Syrian leader.
It was not immediately clear who carried out the attack. 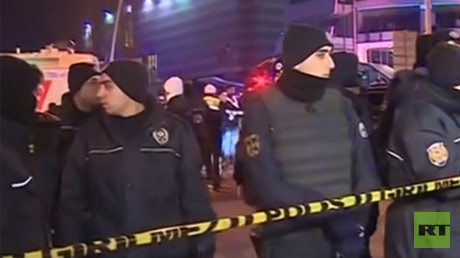 "We'll  make you pay for Aleppo"

"Karlov’s attacker appears to be wearing a suit, and reportedly shouted “we will make you pay for Aleppo.”

Reports that the gunman- Shot the ambassador once, told people to leave the room, then shot the Ambassador again. Reports are the injuries are serious- Listening to RT live

Let's look at what's been going on...


Russia and Turkey, a foe of Assad, recently joined to broker a deal to evacuate civilians and rebel fighters from the last opposition enclaves in Aleppo

A gunman reportedly shouted "We die in Aleppo, you die here," before shooting the Russian ambassador to Ankara.

This incident occurring one day ahead of Turkey's FM heading to Moscow.

A declaration of war against Russia?

Reports the Ambassador has been killed?

Confirmed- Reports are confirmed- The Ambassador has indeed died


The Russian ambassador to Turkey has died after being shot in the capital city of Ankara, Russian news agencies report.


The Russian ambassador to Turkey has reportedly died after being shot in an attack at an art gallery in the Turkish capital this evening.
Russian news agency RIA has said he has died of his wounds.


The Russian ambassador to Turkey has been killed after a shooting during a visit to an art gallery, Russian media have reported.


The shooter was definitely of the Allahu Akbar crowd- Screaming it like a maniac!


The attack on Russian envoy Andrey Karlov, who died of gunshot wounds received during an official event in the Turkish capital, Ankara, is qualified by Moscow as a "terrorist act," the Foreign Ministry says.

The topic of the killing of the Russian diplomat will be raised at the UN Security Council on Monday, ministry spokeswoman Maria Zakharova said.

The Russian Foreign Ministry will issue a statement later in the day, she added.