Of course, it isn’t. Though one could excuse the powers that shouldn’t be from being concerned or having us believe that this is worrisome.

I've gathered up a bunch of information regarding Turkey's referendum which will take place April 16/17. I omitted spin and manipulative language in order to keep the emotional reaction down to a dull roar. This was the intro post: Giant "Evet" Referendum Rally In Turkey

Turkey’s induction into NATO was covered in this post -West Unhinged Over Turkish Referendum As was the rarely mentioned roll of the US placement of missiles in Turkey aimed at Russia which actually instigated the Cuban missile crisis. It seems to me it is the Atlantacist establishment and media that are making the most noise about Turkey’s referendum. The Atlantacist, are described most accurately as the clique that comprises of the 5 Eyes Nations The five eyes are the UK, US, Canada, Australia and New Zealand.

Edward Snowden  accurately described these nations and their combined intelligence gathering capabilites cooperation as “supranational”.  Operating as an entity above the individual nation states that make up the group. What  Snowden  was saying was neither startling or bold, it was just a statement of the obvious and what one would expect from a ‘limited hangout’  I would take it further and suggest these nations work together to exercise control over many other nations states, with an eye to global manipulation. Turkey is a nation, occupied/integrated and definitely manipulated, but not well tolerated, by the  5 eyes/ NATO/Atlantacist establishment.

What is it about Turkey that necessitates such heavy control through external manipulations?

What’s that saying in real estate? Location. Location, Location. Turkey's location on the planet is  equal to prime real estate in some desired locale.


The Turkish Straits are compromised of the Bosphorus, the Sea of Marmara and the Dardanelles

The Turkish Straits (Turkish: Türk Bogazlari) are a series of internationally-significant waterways in northwestern Turkey that connect the Aegean and Mediterranean seas to the Black Sea.

They consist of the Dardanelles, the Sea of Marmara, and the Bosphorus, all part of the sovereign sea territory of Turkey and subject to the regime of internal waters.

They are conventionally considered the boundary between the continents of Europe and Asia, as well as the dividing line between European Turkey and Asian Turkey.
Owing to their strategic importance in international commerce, politics, and warfare, the Turkish Straits have played a significant role in European and world history

The modern treaty controlling relations is the 1936 Montreux Convention Regarding the Regime of the Turkish Straits, which is still in force. It gives the Republic of Turkey control over warships entering the straits but guarantees the free passage of civilian vessels in peacetime.


Let's repeat that and let it sink in, ok? "It gives the Republic of Turkey control over warships entering the strait"

If you are so inclined you can read more about this waterway and the agreements for use etc.,
Here 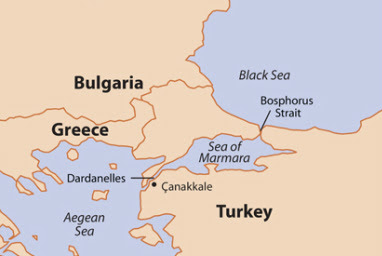 I'm sure that certain parties (unnamed)  believe they'd be better served if controlling the access to or denial of these straits was more amenable to their specific interests.

Some warship related stipulations in the Montreux Convention:


-The treaty limits the access of warships from non-Black Sea nations, but allows Russia and other Black Sea states to move warships through the Turkish Straits to the Mediterranean Sea with few restrictions;

-The convention also restricts outside navies’ access to the Turkish Straits and Black Sea to 21 straight days per warship, and to a maximum aggregate tonnage of 45,000 tons, with any one vessel no heavier than 15,000 tons. Non-Black Sea states must also give Turkey a 15-day notice before sending warships through the straits;

Turkey is the custodian of the straits;

-In case of a war “belligerent powers” would be banned from the Straits. That’s what happened during World War II, when Turkey remained neutral and neither Germany nor the USSR could use the Bosporus and the Dardanelles;

-Aircraft carriers of any flag are banned from the Turkish Straits, both in times of peace and of war.

And all of a sudden the overthrow of the legitimate Ukraine government makes even more sense!
Flashback : Turkey Seeks To End NATO Patrols In Aegean Sea

Back to the Turkish referendum

Is it a threat to certain vested interests? External parties and organizations?  Perhaps it is. However since Turkey is a sovereign nation state ...  It's entirely realistic that the Turkish populace can elect to change their own constitution. Perhaps a a globalist, like David Rockefeller, a one world government kind of believer would disagree? See: James Corbett: The Unauthorized Biography of David Rockefeller. But, I'm not one of those.

From a Parliamentary System to a Presidential System


Below are the 18 proposed constitutional changes

1- What is the referendum about

Turkish voters will approve or decline a group of 18 constitutional reforms that passed through parliament in December. The changes envisions creating an executive presidency like those in the U.S. and Russia, which would turn Mr. Erdogan’s mostly ceremonial office into the seat of government

Doesn't President Trump appoint judges to the supreme and other courts? Directly or indirectly? Yes, he and all other US Presidents do exactly that, as stated by the constitution!

*Supreme Court justices, court of appeals judges, and district court judges are nominated by the President and confirmed by the United States Senate, as stated in the Constitution.

2 - Why do the government and Mr. Erdogan want to amend the constitution?

Such a move would reduce instability and regime crisis stemming from competing centers of power, according to Mr. Erdogan and his deputies.

3- Why is the proposal controversial?

It is claimed by those that oppose this constitutional amendment that " The proposal would also weaken existing incentives for political compromise by guaranteeing one-party rule, destroy minority parties and undermine checks-and-balances, they say"

Of course, we can't know if what "they say" is accurate