It's our traditional May 2/4 weekend- Get your 24 beers.Watch fireworks. Garden.
Also known as Victoria Day weekend
No gardening going on here.

The month of May is nearly over. Summer is just over 3 weeks away and we've had two, yes, two days of what I consider slightly warm temperatures for this time of year- 80 F or about 27- 28 C.
Two days for all of May- The rest of this month has been cold.Windy. Rainy. Below normal all month long.


Midsummer heat has been warmly welcomed across southern Ontario, with a two-day streak of temperatures surpassing 30 oC in some parts (not where I live)  of the region.


But cooler conditions are ahead, ( the whole month has been well below norm, except for two days)  along with a widespread risk of severe thunderstorms Thursday as the cold front moves through. Severe thunderstorm watches covered almost all of the south of the province in the afternoon, with some storms already sparking in areas further north in the early afternoon, and in most of the Greater Toronto Area by the late afternoon.

Looking to the end of May:


"Warmer than the first half of May, but no sustained 20 o+C weather in sight," Gillham says. "The pattern also becomes more unsettled again with next system of significance around Wednesday."

Here's hoping. Because May except for two days has been cold. 20 C = 68 Fahrenheit

How about the Atlantic Provinces- How about more snow?

Sunday, May 21, 2017, 12:48 PM - The unofficial start of summer is here, but winter is still hanging on in Atlantic Canada.
Newfoundland in particular is the seeing the worst of it, with accumulating snow for northern parts of the island and Labrador, with rainfall elsewhere on the island. Though snowfall warnings were slowly dropping off Sunday, the system leaves behind very hefty totals, according to Environment Canada.
"Cartwright has reported snowfall amounts of 50 cm since Friday. Latest indications suggest another 5 cm can be expected before the snow tapers off tonight," the weather agency says.

Snow marking the kick off of summer in Newfoundland 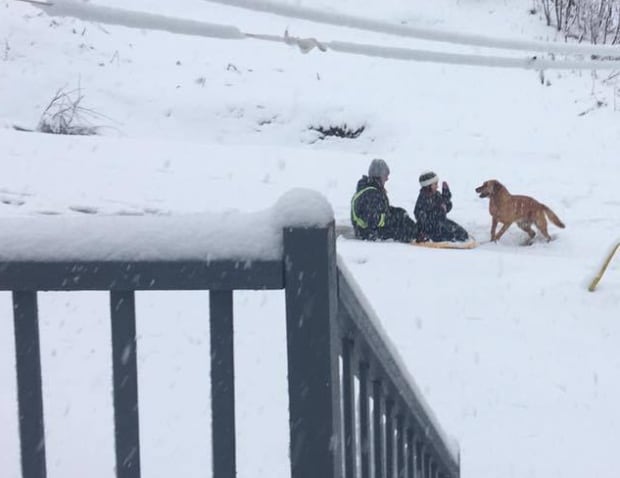 Crops are weeks behind schedule, gardeners are waiting to plant until the sun comes out and winter jackets are still out in force.
On Monday, when temperatures reached 10.3 C, a new mark was set for the lowest May 15 daytime high, beating out the previous record of 10.6 C in 1965. That’s based on the temperature at the Victoria International Airport weather station, where Environment Canada has been collecting data since 1941.

On the bright side of things we got to see a whole pile of Kite Surfers at one of the local beaches. They were fully suited for the cold weather and high winds.  As we also were.
It was a very colourful display. Despite what had to be the cold temps of the Lake, which is now a secret,  no longer shared on a daily basis by Environment Canada.

And if someone can assist me in finding them I would love to know where they can be found?
I checked the marine forecast . They give you wind and waves. Water temperature used to be part of daily reporting..... but now it's secret. Same as historical temps. Secret.