This is very early reporting-

anonymous commenter - I realize now this may have been what you were alluding to yesterday? 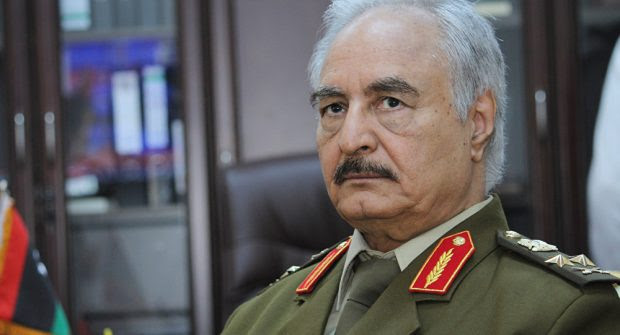 Unconfirmed reports that General Khalifa Haftar, a key figure in Libya’s political landscape, has died in Paris hospital are fueling speculation about the country's future. Haftar had suffered a stroke earlier this week.

Haftar, 74, was reportedly admitted to hospital in France in serious condition. His office denied the reports by outlets such as Le Monde and France 24, however, branding them "fake news."

The Tripoli-based Libyan Observer, considered close to the UN-recognized Government of National Accord, reported Haftar's passing on Friday, and posted photos of people in Tripoli celebrating his death.


Libya eastern warlord Khalifa Haftar has already allowed the C.I.A. to establish a base in Benghazi — a low-key American return to the city after Ambassador J. Christopher Stevens was killed there in 2012 — and a handful of American Special Forces operators are present at an air base near the city, American officials said, reported New York Times.

NYT added that the nomination of the C.I.A. director Mike Pompeo as secretary of state could further align General Haftar with the United States. Mr. Pompeo, whose confirmation hearing took place Thursday, and Haftar, a onetime C.I.A. asset, are avowedly hostile to all forms of political Islam.


If the reports of Haftar's death turn out to be correct- Libya and the entire region are going to take a turn for the much worse. If anyone can even imagine that possibility?!


The situation will become even more unstable should Mr Haftar die or become too incapacitated to lead the LNA. The LNA is a patchwork of tribal militias that have pledged loyalty to Mr Haftar allied with some former Libyan army units, rather than a singular force. As such, Mr Haftar is the unifying factor at present—and he has no obvious successor. In this context, rifts would probably emerge within the LNA and a power struggle for its leadership and key resources, such as oil infrastructure, could lead to internal fighting. In addition, the ensuing chaos would facilitate the strengthening of jihadi forces, such as Islamic State. Although Mr Haftar has often proved a hindrance to peace talks, a break-up of the LNA in any form would inevitably make negotiations more difficult, with a greater number of factions to deal with, thereby putting attempts at political unification on hold in the short term.

Impact on the forecast

We will leave our long-term political forecast that Mr Haftar will gain a role as head of the national army at some point in 2019 unchanged for now. However, if there is confirmation that he can no longer lead the LNA, we would scrap that forecast and highlight greater violence and instability, particularly in eastern and central Libya in 2018‑19.