1- Theresa May gets the OK


The Prime Minister has won the backing of her Cabinet for action to prevent further chemical attacks by Syria's President Bashar al Assad.

Following an emergency meeting lasting more than two hours on Thursday, Theresa May's top ministers agreed Britain should continue to work with the US and France on a coordinated response.

The Cabinet's approval for action raised the likelihood of Britain joining France and the US in a military response against Syria's government.

It also suggested the Prime Minister is set to defy calls from opposition parties for Parliament to be recalled in order for MPs to vote on authorising intervention.

:: What are the military options in Syria?

US President Donald Trump was due to speak with Mrs May and French President Emmanuel Macron later on Thursday, with the White House revealing he is still yet to make a "final decision" on action.

The Cabinet agreed with the Prime Minister's assertion it is "highly likely" President Assad's regime carried out a "shocking and barbaric" suspected gas attack in the Syrian city of Douma on Saturday.

After the meeting, in which every minister present spoke, Downing Street also revealed the Cabinet "agreed it was vital that the use of chemical weapons did not go unchallenged".

In addition, ministers were said to have "agreed on the need to take action to alleviate humanitarian distress and to deter the further use of chemical weapons by the Assad regime".


2- Mr Macron claimed on Thursday he had "evidence" that chemical weapons were used in Douma by the Syrian government, including chlorine gas.

France claims they have proof- but do not elaborate on how or what that “proof”  is ?

Macron told the broadcaster that France had obtained proof that the Assad regime had used chemical weapons in its attack on the city of Douma on April 7, including chlorine gas. More than 150 people were killed in the attack, including many women and children.

Macron did not elaborate on the nature of the proof.

So we should assume that Macron has nothing since he can't elaborate.

RAF jets have been pictured ready to launch air strikes on Syria at a moment’s notice in retaliation for the suspected chemical attack in Douma last week. 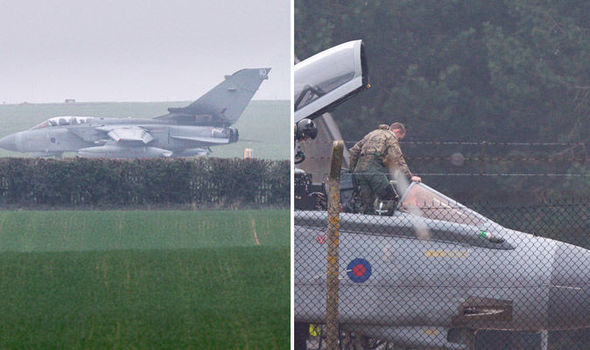 The jets will speed to Syria if Theresa May gives air strike action the go-ahead, after ministers backed her during an emergency cabinet meeting this evening.

Despite Donald Trump’s tweet suggesting that a US strike on Syria was imminent – and warning Russia to “get ready” – the US naval and other forces in the region suggest his rhetoric may have outpaced military readiness for anything but the most limited action.
Trump’s tweet – which he appeared to row back on on Thursday – appears to have given Syrian forces ample warning to move key assets, suggesting that any strike now would be largely symbolic and have little meaningful impact on the conduct of the war in Syria.

Crucially, there is currently no US aircraft carrier strike force in the region. This is significant as the Pentagon is likely to prefer to rely on ship-launched cruise missiles against a Syrian airspace heavily defended by recently installed Russian anti-aircraft missile systems.

There is a US aircraft carrier strike force on it's way to the region - Should arrive next week. Covered in a previous post. Syrian News Round Up- Warnings Issued for Eastern Mediterranean


Turkish President Recep Tayyip Erdoğan and his Russian counterpart Vladimir Putin talked about the latest developments in Syria in a phone call Thursday, according to the Turkish presidency.

The two leaders exchanged views on the recent developments in Syria.

Erdoğan also spoke with his U.S. counterpart Donald Trump over the phone about the Syrian crisis earlier on Wednesday.

The dialog is good. I'd rather everyone talks, then the potential for  full blown, all out, WW3.


AMSTERDAM, April 12 (Reuters) - Fact finders from the Organisation for the Prohibition of Chemical Weapons are travelling to Syria and will start work on Saturday, the agency said.

The OPCW decided to send the team this week to investigate alleged use of chemical weapons in the Syrian town of Douma - a mission requested by the Syrian and Russian governments.

The attack on Syria will take place, most probably, after the OPCW team travels to Syria- Evidence doesn't matter at all in this case. As stated repeatedly- It's trial by media in the court of perception managment- And it's that way because most people simply don't care!


7- An interesting aside: Trump fired the head of Homeland Security on the advice of John Bolton

Bolton wants to assemble his own team- Frightful!

Tom Bossert was an ideal Trump administration official – a man with the résumé of an Establishment Republican, and the capacity for sycophancy of a Trump crony.

A former fellow at the Atlantic Council and author of the George W. Bush administration’s 2007 National Strategy for Homeland Security, Bossert brought genuine policy expertise and management experience to his role as Homeland Security adviser. But he also brought a willingness to enthusiastically defend Trump’s most controversial actions — including his recent deployment of the National Guard to the southern border — as well as to parrot Trump’s views on Russian interference in the 2016 election. In a West Wing beset by chaos and dysfunction, Bossert was regarded as one of the few competent aides still standing.
And John Bolton just got him fired. As Homeland Security adviser, Bossert would have been a subordinate of the incoming, mustachioed White House national security adviser; and Bolton would prefer to assemble his own team.

Israel will kick this off. Then the US will be forced to 'rescue' it's perpetual victim in the region.
Could be a false flag type action. Could just be that Israel starts firing missiles. Israel is always suspect because they so desire this war!
Posted by Penny at 6:58 PM