How to explain the fact that a man resembling Khashoggi was caught on CCTV after his alleged murder?

While at the same time the Saudi's say "we don't know where the body is"??

Claim a body double was used! Of course!

This news originates with CNN.... 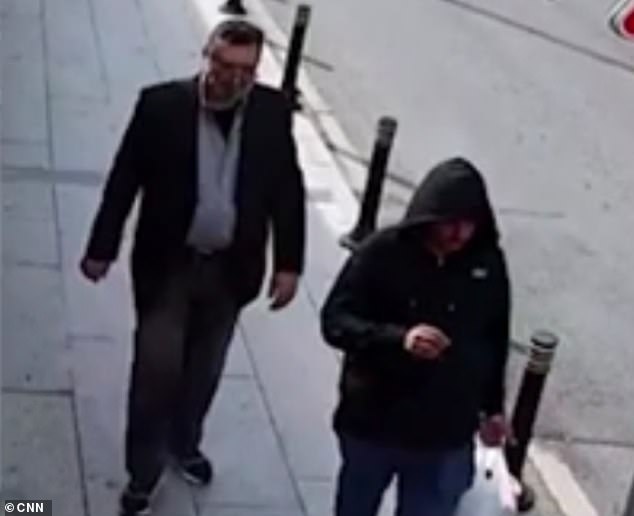 
Is this really a "Saudi intelligence" officer? How can one tell by that image?

How do they know it's a "fake beard"?

Was that Jamal Khashoggi outside of the embassy?
How do we know a the body double did not enter the embassy?
And the real Jamal Khashoggi was pictured walking down the street on CCTV after his alleged killing?
I'm sure not taking the always obfuscating media's word at face value!

Particularly when it's reported the Saudi's say... We don't know where the body is!

"Adel al-Jubeir told Fox News those responsible for “this huge and grave mistake” would be held accountable.


He insisted Saudi officials did not know the whereabouts of Mr Khashoggi’s remains."


The fiance? Whose tale I never believed..

Here's another change in her story from immediately after Jamal Khashoggi did not exit the embassy..

Cengiz, who was waiting outside the consulate when Khashoggi entered the building, had not previously accepted that he had died. Khashoggi had gone to the consulate on October 2 to conduct paperwork that would allow for the two of them to be married.

In the event that he did not emerge, Khashoggi had told Cengiz to call his friend Turan Kislakci, the head of the Turkish Arab Media Association.

In the event that he did not emerge, Khashoggi had told Cengiz to call his friend Turan Kislakci, the head of the Turkish Arab Media Association.

"Hatice said he left the phone with her and told her to call an adviser to Turkish President Recep Tayyip Erdogan if he did not return."


"Hatice said he left the phone with her and told her to call an adviser to Turkish President Recep Tayyip Erdogan if he did not return."

Well, which was it? Erdogan adviser or the head of the Turkish Arab Media Association?
Who did she first call when Khashoggi  did not re-appear???

Notice that her earlier claim of Khashoggi telling her to call an adviser to Erdogan connects this incident in the mind of the readers immediately to the Turkish government?
Though the later reporting has her calling a media association when Khashoggi did not re- appear (allegedly) I tend to believe that she called the head of the media association to get the 'ball rolling'.


"I do not know if Jamal is inside. I want to know where Jamal is. Did they detain him? Did they kidnap him? Is he imprisoned?" the visibly tired Cengiz told CNN's Jomana Karadsheh outside the consulate, a day after his disappearance. At the time, she asked media outlets not to name her.

Why did she initially ask media outlets to not name her? Had she not been given her stage name? I don't know. But that's as possible as all the other claims were told to believe.

Recalling Khashoggi's son didn't even know who she was. And the family lawyer denounced her as well...........

Yet, another news article touching on the fiance being an unknown to the family


Following a meeting held by the Khashoggi family, a prominent clan in Saudi Arabia, in Jeddah on Sunday, its legal advisor, Motasem Khashoggi told Al Arabiya English that the family is regularly in touch with the Saudi government regarding the case of Saudi citizen Jamal Khashoggi who has disappeared in Turkey.

He clarified that the woman who is called “Khadijah” who is promoting herself as Jamal's fiancé, is not known by the family and she is not his fiancé. “We do not know her, we do not know from where she came and she is not connected to the family, and her statements and presence might be to push her own agenda,” he said.


Psychological operation. Through and through.