"When direct oppression is no longer possible, deliberate dumbing down will do just as well."

Managed to listen to this interview last week.
Education is not about educating. It's about 'socializing'. The edu-indoctrination system does not hide this fact. But, have you ever considered what it means to be "socialized"?


Socialized: to make (someone) behave in a way that is acceptable to their society.

Who or what is the deciding factor's in what is acceptable to society?
There is a whole lot of edu-indoctrination that is not acceptable in my opinion. Doesn't enrich any one child's life, in my opinion.  Most young people these days cannot do math. Can't calculate in their head. Can barely count. Can't read. And worse of all- Can't think or reason. Annoyingly many people today speak in sound bites! What in the hell is that?!


Education as it stands today is little more then state sponsored indoctrination. And an exercise in cult(ure) creation

I've written about the adventure of educating our own daugher despite her attending state schooling, previously. Relinked at the bottom.

She did attend school and still we had to teach her all kinds of additional lessons- in order for her to actually function in life.


Interestingly, at the time she was learning to read- she was told to 'just read what she thought was on the page' based on the pictures- I taught her to break down words phonetically.
A bizarre method of reading was mentioned in the interview- One that actually caused children of the day to have mental problems. Oddly enough it sounded similar to the gibberish they tried to teach our daughter. And yes she had to learn her multiplication tables, which, made learning division a whole lot simpler. Hubby taught her how to measure volume etc.,
And she reminded me this past week that Dad has also taught her SOHCAHTOA
As we  continued to discuss her elementary/high school education- I told her if I was a parent with young children in this day and age I would do everything possible to home school.


Public school as it is today is simply unfit to exist. Lots of tax money is thrown at it, but what is the real and true value to the students?

This perception managing 'gender' agenda taught present time has no basis in reality.  The Ontario sex education borders on promotion of pornography. The indoctrination regarding  AGW, like the sex ed, gender agenda is plain and simple cult control/socialization to fit into a broader sick society.  No basic logic or reasoning is taught. The ability to discern fact from fiction. To spot contradictions and logical fallacies. These are the skills that children need to have in order to truly succeed in life.  Except that would run contrary to edu- indoctrination and state sponsored  culture creation.
Yet, this is the way a free man/woman should learn in a truly free society. But then this is not a free society, by any standard. No matter how much we lie to ourselves

"watching how its unscientific claims about gender identity have spread so prevalently has dampened my enthusiasm. The curriculum promotes the idea that there are more than two genders and that gender identity is socially constructed. The fact that few people have pointed out how these teachings aren’t based in science should raise a red flag in parents’ minds"

According to one survey, less than 1 per cent of people in the United States identify as transgender. That means for over 99 per cent of us, our biological sex is our gender.

And that makes sense. From a survival of the species perspective.


I wish more parents would think about that reality. And stop being so "socialized"


Now that my rant is done- please give a listen to the interview.
Provided to us, with thanks,  by Legalise Freedom 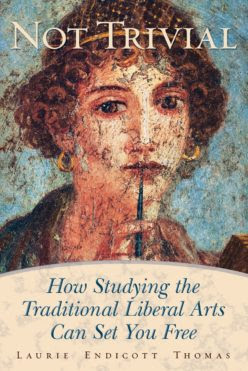 Laurie Endicott Thomas discusses her book Not Trivial – How Studying the Traditional Liberal Arts Can Set You Free.
Why are there so many problems within our modern education system? In theory, our schools should be better than they’ve ever been, but growing numbers of people are embarking on their adult lives as functionally illiterate. Despite the best efforts of educators, much of the system is thus increasingly unfit for purpose. This has enormous implications for society in general, and politics in particular. Is this by accident, or by design? Are there hidden agendas at work? Upon investigation, it would seem that the true purpose of compulsory state education is less about liberation and freedom of opportunity, and more about control, coercion, and churning out compliant consumers and obedient workers willing to take their allotted place in society’s hierarchy. When direct oppression is no longer possible, deliberate dumbing down will do just as well.

Further information at her website: www.nottrivialbook.com
Listen at the link provided or download and listen at your leisure- listen twice.