Here's hoping my readers are as open minded as I like to think they are?

I'm aware this news broke last night and yes I did catch some of the earliest reports.
The imminent use of "chemical weapons" from the demilitarized zone has been reported for quite some time now.  It's probably been mentioned here at least a half a dozen times. Considering the FACT that Iran, Russia and Turkey have Idlib surrounded it seems quite sensible they have a good handle on the going's on in that location. Not perfect. Not 100 percent. That's just not possible, in my opinion. But the 'troika' have a sufficient idea of the comings and goings in the locale.

Here I'm going to refer, again, to the map from the previous post. 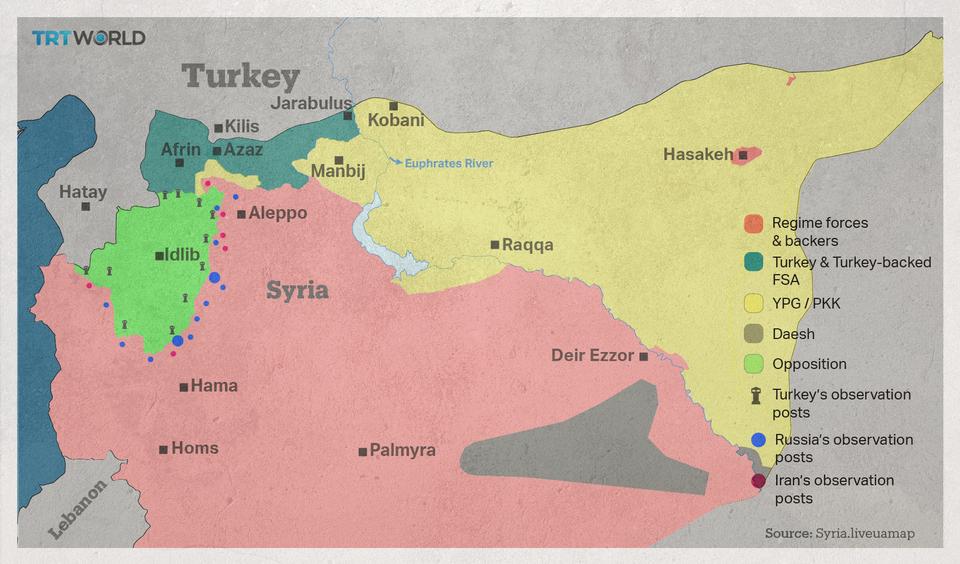 The outposts that surround Idlib are marked on the map:
*Iran has 6 outposts
*Russia has 12
*Turkey has 11 outposts

It's been clear for a while now that the HTS were not going to cooperate with the Russian/Turkish agreement on Idlib. On November 20th there was a meeting in Sochi.
Covered here at the blog:

“The situation in Syria requires our immediate decision and discussion of the urgent issues. The dynamics we have gained after signing the documents on Idlib in Sochi needs to be maintained to tackle the remaining issues without losing momentum,” Shoigu told his Turkish counterpart Hulusi Akar in the Russian Black Sea resort of Sochi on Tuesday"

Turkey's head of National Intelligence Service (MIT) Hakan Fidan was also present at the meeting, according to Turkish defense sources.

We have an important meeting take place on Tuesday. Very important people. All working towards getting the Idlib situation settled. All the heavy weapons were to be handed over, under the supervision of Russia and Turkey. This did not happen.


" The rebels are to hand over their heavy weapons under the supervision of Russia and Turkey by Nov. 10."


The reality has always been that Turkey can't do a dam thing with the vast majority of these thugs. The terrorists they backed were on board with the deal. The other terrorists- AQ/HTS were not. This is because they answer to a different master.

It's worth noting a couple of interesting occurrences:

Prior to the chlorine attack Turkey had removed those allied to them from Idlib:


DAMASCUS (Sputnik) - The specific names of the groups, to which the militants belong, are not indicated by the pro-government Syrian newspaper al-Watan.

According to al-Watan, turkish military has transported a significant number of militants from the demilitarized zone in the Syrian province of Idlib to a tent camp in the Turkish city of Nusaybin on the border of the two countries, al-Watan reported on Saturday, citing local sources.

When the chlorine attacks occurred- they came via shells lobbed just north of the area where they struck. Russian military experts were on the ground within hours of the attack- Hubby informed me of this report last night too! So they appeared very quickly.

"Groups of specialists from units of nuclear, chemical and biological warfare protection deployed at observation posts in Syria urgently arrived to the area of the attack, carrying special equipment with them. They are working with the injured in hospitals, and monitor the environment in the area where toxic substances were used by militants," he said.

"According to initial information, confirmed, among other things, by symptoms diagnosed in those affected, the projectiles launched at residential districts of Aleppo were filled with chlorine," the Russian general added.

The official went on to say that the Russian side has earlier reported that the organization known as White Helmets was preparing to organize chemical provocations in the demilitarized zone around Idlib in order to accuse the government troops of using chemical weapons against civilians.

Mortar rounds, filled with toxic substances, presumably chlorine, landed on the Nil Street in the Al-Khalidiyah neighborhood. The projectiles were fired from positions in the southeastern section of the Idlib demilitarized zone, near the town of Al-Buraikat, controlled by militants of the Hay'at Tahrir al-Sham group (formerly Jabhat Al-Nusra, outlawed in Russia). 120-mm mortars were used in the attack.


It's being reported that Russia is bombing present time:

Russia's Defence Ministry confirmed that Russian jets hit the targets of terorrists who had reportedly shelled Aleppo with deadly chlorine gas on Saturday.
According to the ministry, intelligence services identified in the Idlib de-escalation zone the fire weapons that were used in the Aleppo gas attack. They also found that the terrorists were preparing for another poisonous shelling. All the targets were destroyed; Turkey was warned about the strikes in advance via a hotline.

Earlier in the day, Damascus accused unnamed western countries of supplying weapons to armed terror groups so that they could stage false flag chemical attacks and then blame them on the government. Syria also urged the UN to take "punitive measures" against the countries that were supporting the Aleppo attackers.

Russia's Foreign Ministry, in turn, described the Aleppo shelling as an "attempt to damage the Syrian normalisation process", adding that it should be "unconditionally condemned" by the entire international community.

When life gives you lemons, you make lemonade?
Or throw them back.. really hard?


I'd be willing to consider a MIHOP, also. Except for the fact that the White Helmets and friends have undertaken chlorine attacks previously so I can't discount entirely they made this move for their own reasons. Except this time Russia and Turkey got ahead of them on plan.

Additional Clarification: Before noses get right out of joint regarding the LIHOP question..?

Russia could take no action in Syria unless something did happen.

Otherwise it would have been considered a huge provocation. Therefore.. to avoid appearing the aggressor in Syria, and garnering international ballyhooing alongside Syria, they had to wait until something happened.  Russia and their partners could have had the intelligence on this attack, but, could not act, could not pre-empt the attack.
Therefore they would have had to let it happen.

No further details were immediately available.

Russia and Syria have blamed HTS. In the report it appears to be those affiliated with Turkey denying their involvement- Which may be true. Since Al Watan reported that Turkey had moved militants from Idlib, yesterday.