I've covered this topic previously.
Polar Bears are and have been thriving in the Arctic.
They have no predator other then an armed man/woman to fend off an attack or reign in out of control populations- One wonders if the seals can survive an over abundant polar bear population? 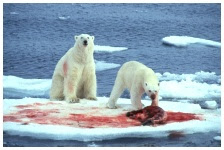 An unarmed human stands little to no chance of fighting off a polar bear attack
Just the facts. If you want spin, go elsewhere.
World's Largest Land Predator


Polar bears are the world's largest land predators. They top the food chain in the Arctic.
they spend most of their time on the pack ice or in the water, hunting down their favorite food - seals

To say they are fierce would be an understatement

And the cutesy coca cola drinking polar bear is for people out of touch with the reality of nature. And life on this planet.

There are too many polar bears in parts of Nunavut and climate change hasn't yet affected any of them, says a draft management plan from the territorial government that contradicts much of conventional scientific thinking.

The proposed plan -- which is to go to public hearings in Iqaluit on Tuesday -- says that growing bear numbers are increasingly jeopardizing public safety and it's time Inuit knowledge drove management policy.

"Inuit believe there are now so many bears that public safety has become a major concern," says the document, the result of four years of study and public consultation.

Public safety concerns, combined with the effects of polar bears on other species, suggest that in many Nunavut communities, the polar bear may have exceeded the co-existence threshold."

The plan leans heavily on Inuit knowledge, which yields population estimates higher than those suggested by western science for almost all of the 13 included bear populations.

Its position is strongly supported by the 11 Inuit groups and hunters' organizations that made submissions.

"(Inuit knowledge) has not always been sufficiently incorporated by decision-makers," says a document submitted by Nunavut Tunngavik Inc., the Inuit land-claim organization. "The disconnect between the sentiment in certain scientific communities and (Inuit knowledge) has been pronounced."

This is very frustrating for Inuit to watch ... We do not have resources to touch bases with movie actors, singers and songwriters who often narrate and provide these messages," it says.

"We know what we are doing and western science and modelling has become too dominant."

Oh, more of that computer modelling......

The management plan doesn't propose to increase hunting quotas immediately. It contains provisions for increased education and programs on bear safety for hunters and communities.

It does say hunting bans would no longer be automatically applied to shrinking populations and that "management objectives ... could include managing polar bears for a decrease."


It's a given Derocher 'insists' on pushing the agenda.  Money talks.

However.... it is just as likely that the polar bear populations have grown so large, they are coming into more regular contact with humans because of their expanding population growth  and they are becoming a danger to the human residents of the area. Keep in mind the reality of polar bears- they have no natural predator. They are the top of the pile. No unarmed person can go toe to toe with them and have a really good chance of surviving.

Just last year, the World Wildlife Fund’s climate blog headlined that “Polar Bear Population in Canada’s Western Hudson Bay Unlikely to Survive Climate Disruption.” But it seems that since then this subpopulation, previously believed to be among the most threatened subpopulations due to global warming, has made a miraculous recovery. According to aerial surveys released by the Government of Nunavat this month, their numbers are at least 66% higher than expected.


Polar bear encounters with humans on the rise, more put in Churchill jail

"Manitoba government documents suggest polar bear encounters with people have reached record levels on the shores of Hudson Bay with more of the mammals ending up in a specialized jail in Churchill.
Polar bear activity reports from the past three years show the number of documented cases in Churchill has jumped from 229 in 2013 to 351 last year"

The article from 2016 pushes the AGW meme. But, it could just as well and is actually better documented, for years now, that the polar bear population is growing.

One last item: Those same researchers that push the  AGW 'threatened' polar bear meme- And will not allow for the Inuit to protect themselves as they push an agenda are, as you would or should expect, armed and will shoot polar bears if necessary....

In March this year, one attacked a sleeping Czech tourist, causing injuriesto his face and arm before fellow campers shot the animal dead.
Every new arrival at Ny-Ålesund must learn to shoot if they wish to leave the base.

The most important message: "always be vigilant; bears could be anywhere and they are unpredictable," Sebastien Barrault, the scientific advisor of a Norwegian company running logistics at the site.

"A gun is your passport for leaving the town," he said.