Well, I've got to admit this interview was a real treat for me!
Jasun Horsley's site has been linked in the sidebar for some time now.
If you missed it? Here it is again: Auticulture 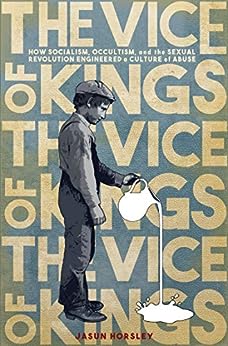 This interview gives me the opportunity to mention Jasun's latest book. Which, I just so happened to have finished reading a couple of months back.
Was it thought provoking, interesting and imminently readable? Yes, it was.
Is it recommended? Indeed it is, highly recommended.    Particularly if you've read David McGowan's work on serial killers- Programmed to Kill. (which appears to be unavailable here in Canada?)  And/or the Laurel Canyon book And/or either of Jay Dyer's books: Esoteric Hollywood I and II ( I'm just finishing up the second volume as this post is being published  LOVE IT)

Amazon: How Socialism, Occultism, & the Sexual Revolution Engineered a Culture of Abuse

In today’s “post-truth” world, we are becoming inundated with fantasy fictions, “alternate news,” and grossly oversimplified (and wildly exaggerated) conspiracy theories that identify cryptocratic power structures ruling our fates. But suppose the truth is both stranger than any fiction and more nuanced and disturbing than any theory? Suppose it is not conspiracy but complicity that creates our world?
Beginning as an investigation into the author’s childhood inside a closet aristocracy of “progressive” British entrepreneurs, Vice of Kings uncovers a history both disturbingly personal and shockingly universal. By juxtaposing disc jockey Jimmy Savile’s secret cultural, criminal, and political affiliations in the second half of the 20th century with the life and teachings of Aleister Crowley in the first, it uncovers an alarming body of evidence that organized child abuse is not only the dark side of occultism, but the shadowy secret at the heart of culture, both ancient and modern.


You can buy the book at Jasun's place as well as Amazon.ca or .com

The interview, which runs just over an hour, was terrific.
And, as already stated, Jasun's book- The Vice of King's is highly recommended.

The Liminalist # 203: The Robo-Nanny State (with James Corbett)


Conversation with James Corbett that makes the most of James’ vast and erudite knowledge on deep global politics, collective brainwashing, long-term social engineering, the technocracy movement, and what he calls “turnkey totalitarianism.” Looks at the deeper psychological and emotional mechanisms being exploited, coopted and undermined by decades of conscious sociopolitical manipulations.

Transgender transformation, the eradication of the family, false solutions to real problems, a collective double-bind, a sense of helplessness, the medical-industrial complex, a future orientation, disowning the past, lost gold standard irrational hope, technology & passivity, spectator politics, the pull of a lever, Obama & Trump, lining up for our enslavement, turnkey totalitarianism, the robo-nanny, the UFO as transcendental technology, believing the unbelievable, self-propagating propaganda.