Lots going on in that part of the world.
Let's do some background. For the simple reason that a minimum understanding of the importance of that area will help to understand what the people of the world will be most probably be faced with in the near future. More global ugliness.

Penny, thanks for this info. It goes well with an article I read by Frederico Pieracinni talking about how the US using forcing its LNG onto in order to keep the dollar as the reserve currency. Since Europe is the last market that the US can dominate with LNG, they are meddling against Russian pipelines and North African sellers such as Egypt.

Excellent article, thanks for leaving the link anonymous! Read it, entirely.
Checked out the graphs etc., Suggest all who stop by do the same..
Just some excerpts below:


One of the most important energy battles of the future will be fought in the field of liquid natural gas (LNG). Suggested as one of the main solutions to pollution, LNG offers the possibility of still managing to meet a country’s industrial needs while ameliorating environmental concerns caused by other energy sources. At the same time, a little like the US dollar, LNG is becoming a tool Washington intends to use against Moscow at the expense of Washington’s European allies.

To understand the rise of LNG in global strategies, it is wise to look at a graph (page 7) produced by the International Gas Union (IGU) where the following four key indicators are highlighted: global regasification capacities; total volumes of LNG exchanged; exporting countries; and importing countries.

But Europe finds itself in a decidedly uncomfortable situation that cannot be easily resolved. The anti-Russia hysteria drummed up by the Euro-Atlantic globalist establishment aides Donald Trump’s efforts to economically squeeze as much as possible out of European allies, hurting European citizens in the process who will have to pay more for American LNG, which costs about a fifth more than gas from Russian, Norwegian or Algerian sources.

Washington, with its LNG ships, has no capacity to compete in Asia against Qatar and Australia, who have the lion’s share of the market, with Moscow’s pipelines taking up the rest. The only large remaining market lies in Europe, so it is therefore not surprising that Donald Trump has decided to weaponize LNG, a bit as he has the US dollar. This has only driven EU countries to seek energy diversification in the interests of security.

The European countries do not appear to be dragging their feet at the prospect of swapping to US LNG, even though there is no economic advantage to doing so. As has been evident of late, whenever Washington says, “Jump!”, European allies respond, “How high?

To accompany the article left by anonymous. Considering the most recent activities  of the past couple days...

The operational activity of the fifth generation F-35 fighter jets, from the British Base RAF Akrotiri on Cyprus to Syria and Iraq, was formally confirmed yesterday by the British Defence minister, Penny Mordaunt. As part of her official visit to the island, Mordaunt visited the Base Akrotiri yesterday, where she was informed of the successful participation of the F-35s, from 16 June, in fourteen in total missions over Syria and Iraq. 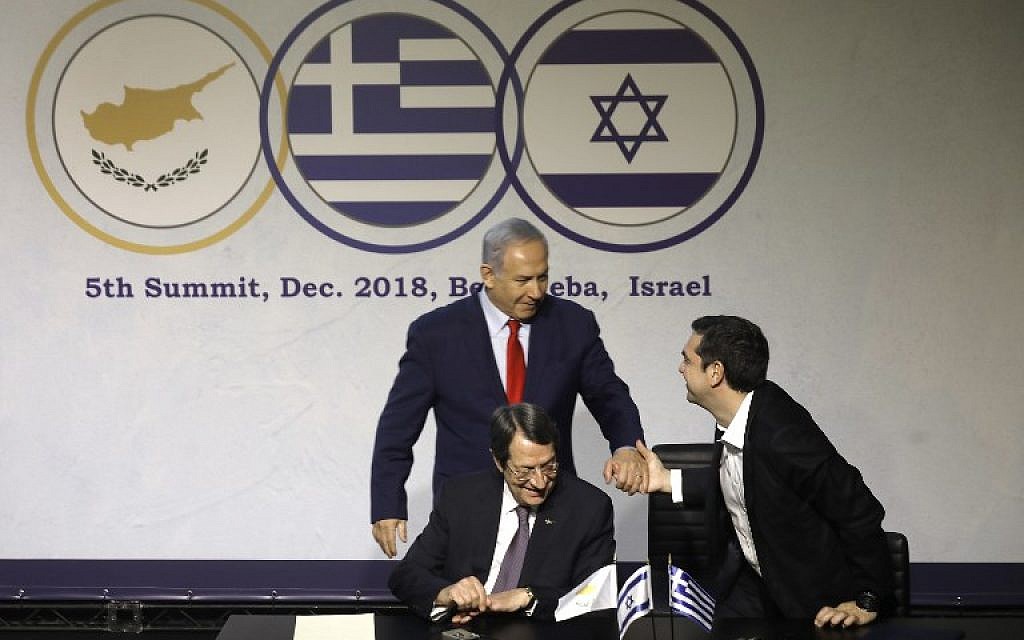 "The limitless potential of the region was on full display during the sixth trilateral summit among Cyprus, Greece, and Israel that took place in Jerusalem last week. The gathering was especially noteworthy because the United States, represented by Secretary of State Pompeo, also participated for the first time.

Facing an unprecedented number of foreign policy flashpoints, the US risks being spread too thin to adequately address the challenges in the region and protect American interests. This is precisely where Israel, Greece and Cyprus come in.

Cyprus, Greece, and Israel provide important assets for Western security interests.  Each state has already made substantial contributions on its own but taking their growing cooperation and coordination on counter-terrorism, counter-proliferation, search-and-rescue and maritime security to the next level will make the Eastern Mediterranean and southeast Europe safer.

Souda Bay Naval Base in Greece and the British bases in Cyprus make these countries especially valuable for Western security interests, and expansion in both could allow the US, if needed, to decrease its reliance on the Incirlik base in volatile Turkey. Meanwhile, the US-Israel strategic link is both deep and wide-ranging.

Finally, there are the recent major discoveries of natural gas and ambitious plans for new underwater pipelines. American companies — Noble and ExxonMobil— are already the most significant players in the Exclusive Economic Zones of Israel and Cyprus. Just three weeks ago, ExxonMobil announced the world’s third-biggest gas find in the last two years off the coast of Cyprus.

Combining this discovery with existing Noble finds in Israel and Cyprus, the Zohr field in Egypt, and anything resulting from upcoming exploration in the region by ExxonMobil, TOTAL, and ENI could have important geopolitical, environmental, and economic consequences. That these resources may be delivered to European markets through the planned East Med Pipeline makes Western democracies primary players in the region’s energy politics."

The US is working to keep it's global hegemony in place. It's going to use LNG as the control mechanism. Weaponizing it. They have Cyprus, Greece and Israel as local/regional allies to aid in their plan. Russia has it's own LNG pipelines already going. This involves the deal with Turkey. (This probably relates to why Turkey is getting the S-400)
Go back to this post..