"Turkish President Recep Tayyip Erdogan is heading to Moscow on Thursday to meet with Russian President Vladimir Putin in an attempt to reach an agreement regarding Idleb in northern Syria. This summit had not been possible until a few days ago, as Putin had been trying to avoid it. But then there were fears that the situation would get out of control after the wide-ranging Turkish response to the attack that struck its forces on Feb. 27, 2020, killing 33 soldiers. 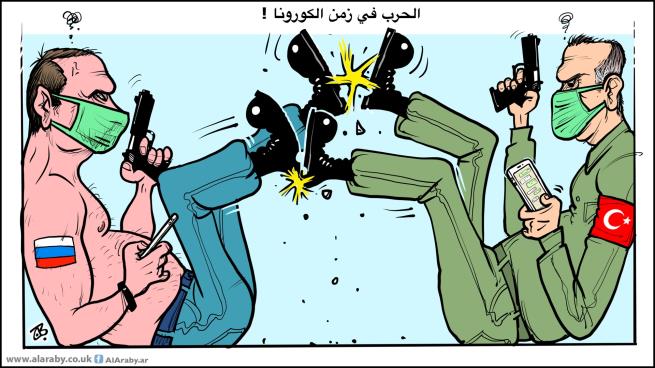 The possibility of reaching a new agreement during the Turkish-Russian summit looks to be high, given both sides’ pragmatism and their insistence on not getting into a direct conflict.

This was noticeable in the signals exchanged during the recent escalation."

Unlikely that the dogmatic "alt media" noticed those signs though they were present. Again, hoping diplomacy wins the day.


"Despite the fact that the missile that killed the Turkish soldiers was Russian-directed, Ankara did not blame Moscow for the attack. In exchange, Russian did not intervene to protect regime forces and Iranian militias against the Turkish revenge attack, which killed a large number of fighters. The fact that Erdogan said that he had “no problem” with Russian and Iran in Syria confirmed this trend.

He knows that he would not have real support from NATO ( despite the nonsense from the alt media) or the United States if he got into a direct conflict with Russia and Iran in Syria, especially at this stage when the American president appears to be fully submerged in containing the repercussions of the coronavirus, which is threatening the American economy—and, along with it, his chance for a new presidential term. The US Secretary of Defense was clear when he said that his country is not considering giving air support to the military operation carried out by Turkey in Idleb. Turkey also has not yet received a response from Washington about its request to obtain a Patriot missile system to set up in Idleb, (I personally do not believe any such request was made) and to set up a no-fly zone. President Erdogan is also aware of the limits of the military support he can provide to Syrian opposition forces. Russian media recently indicated that Moscow was ready to provide Kurdish fighters with anti-aircraft missiles if Ankara decided to move forward with providing the Syrian opposition similar missiles, speculation about which broke out after several regime aircraft were shot down over Idleb last month.
It seems clear that military operations in Idleb, at least at this stage, have reached their goal, with each achieving the maximum possible, within the limits permitted by the balance of power on the ground and the surrounding political conditions.

The Syrian regime and its allies have managed to take control of the international Hama-Aleppo highway and the major towns along it. On the other hand, the Turks were able to regain credibility—which had been heavily damaged in recent years, due to the high level of rhetoric and poor level of performance. They were also able to draw red lines for what they are willing to accept in Idleb.

Putin is a professor in political opportunism, and he understands the difficulty of the Turkish position in general, because of Erdogan’s internal situation, and his complex relations with his allies in the West. A regional axis has emerged in this confrontation, which includes Arab countries alongside Cyprus, and even Israel. But Putin also understands that NATO, which refrained from supporting Turkey in Idleb, will be forced to intervene alongside it should the confrontation widen and reach Turkish territory. Therefore, he will also try to deescalate."

Recall my questioning, directed to the dogmatic alt media?


* It begs the question as to why the idea would be put forth that Russia had bombed Turkish troops- Wouldn't this bring NATO fully into the mix?

"The chance of reaching an agreement in Moscow tomorrow is supported by the intensification of the fighting on the ground. Since the announcement of the summit’s date, the Russians and Turks and their allies have sought to take control of the strategic city of Saraqeb to draw the borders of the truce before the summit. The question is not, therefore, about whether an agreement will emerge tomorrow in Moscow, but rather what that agreement is. Leaked maps of the two sides indicate that another Gaza is beginning to emerge in northern Syria, where three million Syrians with a few thousand fighters will be crammed into a small strip of land between the international highway and the Turkish border. Where is Iran in all this? It is trying to intervene in developments in northern Syria by making invitations to a tripartite summit to revive the Astana track. But who wants a summit in Tehran, which is infested with coronavirus?"