Mathematics of Life and Death - The Trouble With "Modelling" Epidemics .........


.....Is the Same as "Modelling" Man Made Climate Change. (Modelling -Since I'm not American)

Way too many real world variables that may or may not be intentionally included or excluded.
Sometimes the variables are unknown and can't, therefore, be considered.
And sadly sometimes it just comes down to garbage in and garbage out.
Despite the many, known issues or shortcomings  with modelling,  we are witnessing in real time the damaging effects on society, the spreading of fear,  the tyranny of so called democratic governments, the loss of our liberties and freedoms based on computer "epidemic modelling"

The attacks from Trump supporters against epidemiologists ratcheted up several bars on Thursday as pundits on the political right took aim at one of the world’s leading epidemiologists, Neil Ferguson of Imperial College in Britain.

Hate the partisan game being played by NYT's- It's idiotic. But, what else can be expected?

Ferguson had co-written a paper this month estimating 510,000 deaths in England and 2.2 million in the United States — if those countries did not take drastic actions. The paper’s conclusions were so chilling that they launched leaders in both countries into action. The next day, Trump abruptly stopped encouraging Americans to go on with their lives and began urging them instead to work from home and not meet in groups of more than 10. 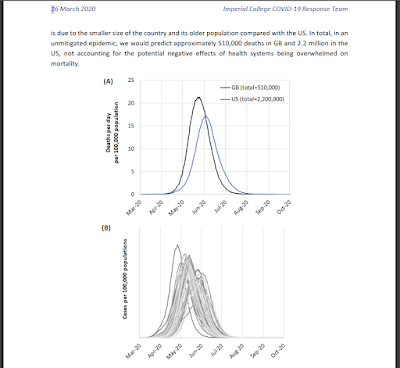 A Wall Street Journal columnist wrote that the revision “raises serious questions about the radical countermeasures inspired by public-health experts like Mr. Ferguson.” Even one of Trump’s coronavirus task force coordinator, Deborah Birx, seemed to lean into the questioning of Ferguson. “I’m sure many of you saw the recent report out of the U.K. about them adjusting,” Birx said. “If you remember, that was the report that said there would be 500,000 deaths in the U.K. and 2.2 million deaths in the United States. They’ve adjusted that number in the U.K. to 20,000. So half a million to 20,000. We’re looking into this in great detail to understand that adjustment.”


“When people start talking about 20 percent of a population getting infected, it is very scary but we don’t have data that matches that based on the experience,” Birx said.

Birx, an HIV/AIDS expert from the State Department who was brought on to coordinate the federal government’s response to the coronavirus, noted that 19 of the 50 U.S. states are showing a persistently low level of coronavirus cases despite reporting early infections. These 19 states each have fewer than 200 cases, Birx said, and are still working to actively contain the virus rather than mitigate its spread.
“That’s almost 40 percent of the country with extraordinarily low numbers and they are testing,” Birx said.

Perhaps if 20 percent of the population were to get infected, as had been modelled, one would have the resulting deaths, or not?

Mathematics of life and death: How disease models shape national shutdowns and other pandemic policies


COVID-19 isn’t the first infectious disease scientists have modeled—Ebola and Zika are recent examples—but never has so much depended on their work. Entire cities and countries have been locked down based on hastily done forecasts that often haven’t been peer reviewed. “It has suddenly become very visible how much the response to infectious diseases is based on models,” Wallinga says. For the modelers, “it’s a huge responsibility,” says epidemiologist Caitlin Rivers of the Johns Hopkins University Center for Health Security, who co-authored a report about the future of outbreak modeling in the United States that her center released yesterday.

Introduction:
The use of infectious disease modeling to support public health decision making, referred to in this report as “outbreak science,” has increased in prominence in the past decade. It has been used in the responses to several major outbreaks, from severe acute respiratory syndrome (SARS) in 2003, to H1N1 influenza in 2009, to the 2 most recent Ebola outbreaks in West Africa (2014-2016) and the Democratic Republic of the Congo (2018-current).

Epidemic modelers are the first to admit their projections can be off. “All models are wrong, but some are useful,” statistician George Box supposedly once said—a phrase that has become a cliché in the field.

Still, models can produce vastly different pictures. A widely publicized, controversial modeling study published yesterday by a group at the University of Oxford argues that the deaths observed in the United Kingdom could be explained by a very different scenario from the currently accepted one. Rather than SARS-CoV-2 spreading in recent weeks and causing severe disease in a significant percentage of people, as most models suggest, the virus might have been spreading in the United Kingdom since January and could have already infected up to half of the population, causing severe disease only in a tiny fraction. Both scenarios are equally plausible, says Sunetra Gupta, the theoretical epidemiologist who led the Oxford work. “I do think it is missing from the thinking that there is an equally big possibility that a lot of us are immune,” she says. The model itself cannot answer the question, she says; only widespread testing for antibodies can, and that needs to be done urgently.

Different models giving us vastly different pictures of what might be occurring.
As admitted above "both scenarios are equally plausible"
Why choose the most terrifying scenario as the model of choice?
One can conclude that the terror scenario was chosen. Opted for. Decided upon. To give cover to the bailouts and keep the masses so deeply mired in fear, that the powers that shouldn't be could have their way. No questions. No problems.
That seems the highly likely reason for the choice of scenarios.
In the meanwhile we are denied our right to live our lives. To work. To assemble. To exercise outdoors freely. To be out, anywhere, without being confronted by scarred, terrorized people. Who won't make eye contact or smile at another human being. To watch neighbours afraid to come out. To fear that your neighbour will snitch to the 'authorities' on your or  other neighbours. Is that how communities should function? I don't think so.

Greencrow reports on the problems with modelling as well
Recent previous reports: