My husband loves racing. He rarely misses one. Me? I can take them or leave them.
That said, I happened to watch the race at Talledega  with hubby.  The PR stunt that unfolded prior to the race was certainly one to behold.  Bubba laying his head down on the top of his car.
Were we supposed to think he was distraught? 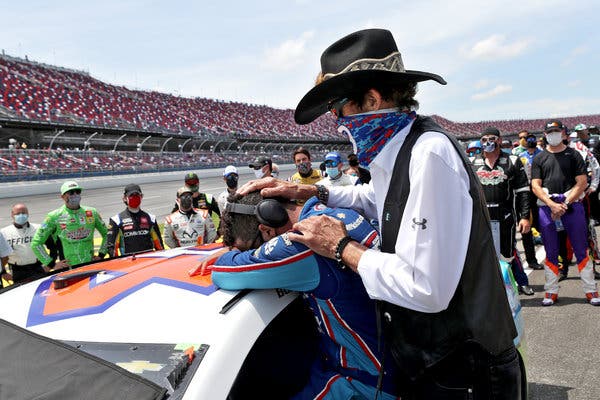 After the 'crying  and consoling scene' a no face mask wearing Bubba Wallace, not adhering to pandemic standards, was embraced by his co-conspirators? Fellow actors in NASCAR?  Wow, it was so very "emotional"- Not

And then of course, there was "Black Lives Matter" at the end. As the guy who actually won the hard fought race got short shrift to push the propaganda.

Yup, I watched it all unfold.

So, yes, I'm  going to wade in the Bubba Wallace/Black Lives Matter PR Stunt. Because, in my opinion, that's all that entire episode was. A Public Relations Stunt. Clearly. Obviously. Blatantly.
If you fall for this? You'll fall for anything. Sadly, I'm all to aware that the masses will very nearly fall for anything.

Scott @ Nomadiceveryman made a couple of videos about this incident.
In his first one I commented

Hi Scott: I haven't listened yet, but #stand withbubba should be #PRop for BlackLivesMatter- Secure area with cameras?- The whole show before the race?. PSY-OP. Then the presence of BLM after the race when the guy who won the race got short shrift so Bubba could greet his BLM fans. Sad. Pathetic So Obviously pathetic.

"Digging a Hole" is a metaphor: "Digging a hole makes it deeper and therefore harder to get out of, which is used as a metaphor that when in an untenable position, it is best to stop carrying on and exacerbating the situation"

In Scott's second video he reports that the alleged offending noose was not a noose but a pull cord of some type. And had been there since 2019- USA Today
After the FBI investigated- No Federal Crime was Committed.

But Mr Wallace insists on digging a deeper hole for himself. Insisting it was noose though he never saw the alleged offending noose himself!

‘It was a noose!’: Bubba Wallace doubles down after FBI concludes NASCAR ‘hate crime’ was pull rope for garage door

"NASCAR driver Bubba Wallace continues to insist that a knotted rope found in his garage – which he never actually saw himself – had racist connotations, even after the FBI determined it was a benign door opener.
Federal investigators concluded on Tuesday that the alleged noose found in Wallace’s garage at the Talladega Superspeedway in Alabama was actually a garage door pull rope that had been there since at least last fall. But, far from being relieved that he hadn’t be targeted by a hate crime, Wallace appeared on CNN to emphasize that the rope was still a noose, regardless of its intended purpose.
Even host Don Lemon seemed puzzled by his argument. “Do you believe it was intended for you in that way? What are you saying here?” Lemon pressed Wallace.

Wallace went one step further, insisting that he had never seen a garage pull with a hand loop before, and that he has evidence that the rope was a “straight-up noose.”

Perhaps he should have showed his 'evidence' to the FBI?


This guy is full of crap

His decision to cling to the debunked hate crime caused many social media commentators to question his motives. Many pundits had initially argued that Wallace had been misled into believing the noose story, since he hadn’t actually seen the rope himself.
“By doubling down, he’s lost all credibility & is a willing participant in gaslighting all of us,” noted journalist Siraj Hashmi.


Gaslighting us all? Yup. This is a gaslighting world. To be sure.

“The original report said that Bubba Wallace never saw the noose. Now he’s insisting through tears that it was a noose,” observed Daily Caller’s Greg Price. He compared Wallace to Jussie Smollett, the actor accused of orchestrating a hate-crime hoax in Chicago last year.

The media have been quick to broadcast alleged hate crimes – but in many instances it seems there are not-so-sinister motives. Earlier this month, ‘nooses’ found hanging in an Oakland park were revealed to be part of a swing for children to play with. The city’s mayor, however, insisted that an investigation into the harmless ropes was still warranted because “intentions don’t matter.”

The media are always quick to spin and incite. But never quick to correct. And when they do correct it's done in such a way as to ensure it's missed. That's just what the media does. All the time. Every time.

Speaking of Gaslighting- I did enjoy the interview below where gaslighting is discussed.

In fact the very type of activity undertaken by  NASCAR is mentioned in this interview. Though the interview predates this latest PR stunt.