Once Azerbaijan took back Shusha, Armenia’s chance to re occupy territory that Azeribaijan had taken back, pretty much evaporated. It would have been much smarter had US lackey Pashinian negotiated a settlement for the return of the territories years ago. But, encouraged by the US and France, undoubtedly,  he didn’t.
Is this conflict over? Can’t be sure. The placement of peacekeepers will help. There are reports Russia is sending peacekeepers in. And there is still talk of Turkish peacekeepers. Notice Russia sat on the sidelines through this all? They let the inevitable play out. For a number of reasons.

But one was certainly the duplicitous of Pashinian.

I'd covered the possibility of this arrangement a couple of days ago:

If you haven't read that report, feel free to do so now. Pashinian's dishonest ways have been covered more then once here. 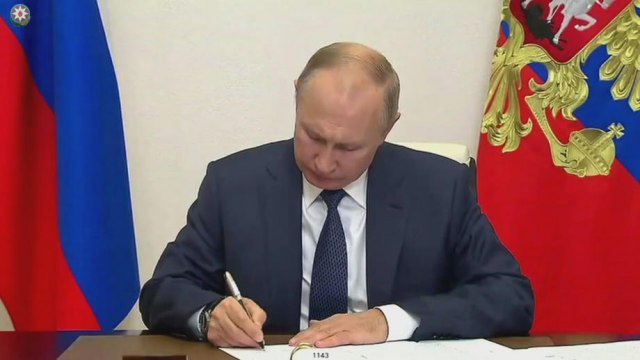 The Russian president announced what the warring parties committed themselves to peace agreement, reports Sputnik.

1. The ceasefire takes effect at midnight on November 10, Moscow time.

2. Azerbaijan and Armenia will remain in their current positions.

3. Armenia and Azerbaijan will exchange prisoners of war.

4. In Karabakh, along the contact line and along the corridors connecting Armenia and Karabakh, Russian peacekeepers will be deployed - a total of 1960 people with small arms, 90 armored personnel carriers and 380 other vehicles and specialist equipment.

5. All transport nodes will be unblocked.

6. Russian peacekeepers will be deployed in parallel with the withdrawal of the Armenian army. The Russian contingent will remain in Nagorno-Karabakh for the next five years, which will be automatically extended if neither side requests their withdrawal within six months before the deadline.

7. To ensure the effective implementation of everything agreed, the peacekeepers will form a center to monitor compliance with the ceasefire.

8. Armenia will return the Kelbajar region to Azerbaijan by November 15, and Lachin by December 1, while the Lachin corridor (5 kilometers wide) will remain in the hands of Armenians, in order to ensure the connection between Armenia and Nagorno-Karabakh, without affecting the status of Shusha. In addition, Armenia must hand over Agdam and part of the Gaza region of Azerbaijan, which it currently holds, by November 20.

9. In the next three years, a plan will be developed for the construction of a new road along the Lachin corridor, which will provide a connection between Stepanakert and Armenia, and a Russian contingent will be deployed on it. Azerbaijan will guarantee the safety of transportation in the Lacin Corridor to all civilians.

10. The refugees will return to their homes in Nagorno-Karabakh, which will be controlled by the UN High Representative for Refugees.

Addressing the nation, Azerbaijani President Ilham Aliyev called the statement of Russia, Azerbaijan and Armenia on the ceasefire in Karabakh historic. He emphasized the special role of Russia in resolving the crisis and pointed out that its role in the region will continue to be important. He also announced that Russia and Turkey will jointly carry out peacekeeping activities in Karabakh.

Earlier, the Prime Minister of Armenia, Nicole Pashinyan, announced that he had signed a joint statement on the ceasefire with the President of Russia, Vladimir Putin, and the President of Azerbaijan, Ilham Aliyev.

The thirteenth and fourteenth Il-76 planes carrying Russian peacekeepers are heading to Nagorno-Karabakh, the Russian Defense Ministry said on Tuesday.

"The thirteenth and fourteenth Il-76 military transport aircraft with Russian peacekeepers have taken off from the Ulyanovsk-Vostochny airfield," the ministry said. "The planes are carrying the personnel of the peacekeeping unit, materiel and armored personnel carriers."

I'd suspected this ceasefire was agreed to prior to it’s announcement. When Shusha was retrieved Armenia agreed. Armenia denied and denied on Sunday, but, on Monday they announced Shusha was under Azerbaijani control and the ceasefire was announced there after. The timeline speaks of the reality.

"The United States and France have not participated in reaching agreements on the Nagorno-Karabakh [(Artsakh)] issue; this is a trilateral agreement between Russia, Armenia, and Azerbaijan. The statement came from Russian presidential spokesman Dmitry Peskov, RIA Novosti reported.

"This is a trilateral statement," Peskov said when asked if the US and France had participated in reaching agreements on the Nagorno-Karabakh issue."

There is unhappiness in Armenia withe the deal

Angry protests broke out in Armenia's capital Yerevan in the early hours of Tuesday, with calls for the resignation of Armenian Prime Minister Nikol Pashinyan after he agreed a deal to end the conflict with Azerbaijan over breakaway enclave Nagorno-Karabakh.

“Meanwhile, an expert on international conflicts Yevgeny Mikhailov notes that if a coup is brewing in Armenia, then Prime Minister Pashinyan has nowhere to run, the Armenian people will get him everywhere."

Overthrowing Pashinian? It could happen.

As usual the so called alternative media provided some of the sloppiest analysis of this situation I’ve ever had the misfortune of reading.  As usual the anti imperial media continues to give the US and France, in particular France, a free pass for their foul machinations in this situation. That didn’t occur here. Thanks to Hans for the nice compliment.

In a statement on Tuesday, The ministry expressed hope that the agreement would lead to the final arrangements for long-lasting peace in the Caucasus region.

It emphasized the need to respect the sovereignty and territorial integrity of countries, imposing no change in official international borders, freedom of the occupied territories, return of refugees to their homelands, respecting the security and rights of minorities as well as ousting Takfiri terrorists and foreign fighters from the region.

Iran also reaffirmed its readiness to contribute to the establishment of permanent peace and security in the region and also to participate in regional initiatives.

In accordance with articles III and IV of the ceasefire agreement, the Islamic Republic of Iran also declares its readiness to assist in the deployment of peacekeeping forces of the Russian Federation, the statement added.

I've been hoping Iran would be a participant- A regional solution is what's been needed.

your analysis as usual is second to none, you have consistently been right about this conflict.

As usual, you can see my analysis is pretty much the outlier to the thoughtless pack. Which is why it's second to none! :))
And has been closer to correct then the other 'alt media' spin sites.
Which is okay. I'd rather it that way.