Not suggesting Trump was not a war monger. He was. But not on the same caliber as “peace president” Obama. Biden will appease the self identified left and their idea of social justice by waging war on new people in new places, for all the “right” reasons. You know? Women. (Birth Control and Abortion to reduce the useless feeders) Children (Vaccines, Big Pharma)   Education (indoctrination into ‘right thinking’ decided by the multinational corporations of course) Health. Food Security ( Petro chemical agriculture) All the memes that appeal to the ‘do righters’ who believe themselves to be bringers of global justice when all these goals serve only to advance the multinational corporate ability to extort massively from the people at enormous expense, on many levels, to humanity.

Biden looks set to bring Susan Rice on board his crew of miscreants. Michele Fluorny being yet another cause for concern. Two women.  You know the term "glass ceilings" is a meme?

Susan Rice will be very keen to target Russia- through the neighbourhood. Which might offer up some insights as to why Russia and Turkey have seemingly transformed their relations. Working cooperatively in Syria, Libya and Nagorno Kharbak.

Michele Flourny is a product of the military machine.

In other words Biden reign will be a return to the “old rule”. Think about Obama and Bill Clinton and the many wars they kicked off. "Most reports mention that Biden’s secretary of state will be Susan Rice, former US ambassador to the United Nations and National Security Advisor in the Barack Obama administration.
Reportedly, Biden’s choice for US defence secretary is likely to be Michele Flournoy, who had previously served as a senior defence adviser in Bill Clinton and Barack Obama’s administrations.
Rice attended Stanford and went to Oxford as Rhodes Scholar for her PhD. Flournoy was at Harvard and also at Oxford as a Newton-Tatum scholar. But the problem lies elsewhere.
Flournoy is the co-founder of the Center for a New American Security, a think tank which specialises on military affairs whose donors include some of the flag ships of America’s military-industrial complex and Wall Street — Northrop Grumman Aerospace Systems, Airbus Group, The Boeing Company, Chevron Corporation, Lockheed Martin Corporation, Raytheon Company, BAE Systems, BP America, Exxon Mobil Corporation — and, curiously, the Taipei Economic and Cultural Representative Office in Washington, DC.
Flourney is a firm believer in the use of military force to secure US interests — “when the interests at stake are vital,… we should do whatever it takes to defend them, including, when necessary, the unilateral use of  military power.”
Unsurprisingly, she is also the co-founder of a strategic consulting firm, WestExec Advisors, which, thanks to its large database of governmental, military, venture capitalists and corporate leader contacts did great business to help companies win big Pentagon contracts.
Flourney and Rice are birds of the same feather who shuttle between the government and business and think tanks.  Both Flourney and Rice were ardent supporters of the US invasion of Iraq in 2003. (So was Biden.)"

Iraq. The war that really kicked off the remake. Birth Pangs. Afghanistan being the foot in the door. 9/11 being the justification for the long planned and desired transformation the region. The goal has never changed.

Rice has been openly critical of Russia and attacked Trump for his perceived closeness to Moscow and admiration for President Putin. She whole-heartedly shares Biden’s characterisation of Russia as America’s number one threat.

Biden’s promise of returning to “normalcy” after Trump appears to mean that the same old politicians who are responsible for the “endless wars” in Afghanistan, Iraq and Syria, who have represented the corporate elite in the corridors of power, who have neither the commitment nor the courage to implement real structural change to America’s political economy, are being brought out of the woodwork after four years"

Biden will create the conditions for yet more bloodshed. Iran, Turkey, Russia are keeping watch of their collective back yards

"Biden can be expected to be far more active than his predecessor in promoting democracy throughout the former post-Soviet space. Biden is deeply enmeshed in East European politics, having led the Obama administration’s policies toward Russia and Ukraine. An acrimonious relationship between the Biden White House and the Kremlin is on cards over issues of democracy.

Democracy is not clearly defined by Bhadrakumar, but we can assume it means more of the same western, liberal, corporate, multinational, banking plunder. Because, that's what it has always meant. Profits before people. At the expense of the masses. Class warfare. Division.

Or as peterm stated (in the comments)

Democracy allows the majority of the population to decide by which representative of the oligarchy they will be exploited, send to war and be deprived of services needed for survival in a complex society.

(The eventual goal is to make societies less complex by only allowing survival of those absolutely necessary to permit the reigning elites a live in luxury in perpetuity and void of any political or social conflicts.)

Putin dwelt on this topic at the summit meeting of the Shanghai Cooperation Organisation on November 10. Putin said, “One more open challenge to our common security is the increased number of attempts of direct foreign interference in the internal affairs of states that are involved in SCO activities. I am referring to the blatant infringement on sovereignty, attempts to split societies, change the countries’ path of development and sever the existing political, economic and humanitarian ties that took centuries to develop"

The chaotic situation over transfer of power in Washington has presented Moscow with a free hand in its highly strategic Transcaucasian backyard. Macron has been Putin’s key western interlocutor all though the crisis in Nagorno-Karabakh since September.

In the case of Turkey, Putin kept Erdogan informed and consulted him in an implicit acknowledgment of that country’s aspirations as a regional power and its importance to Russia as partner in regional security and stability."

As was stated here: 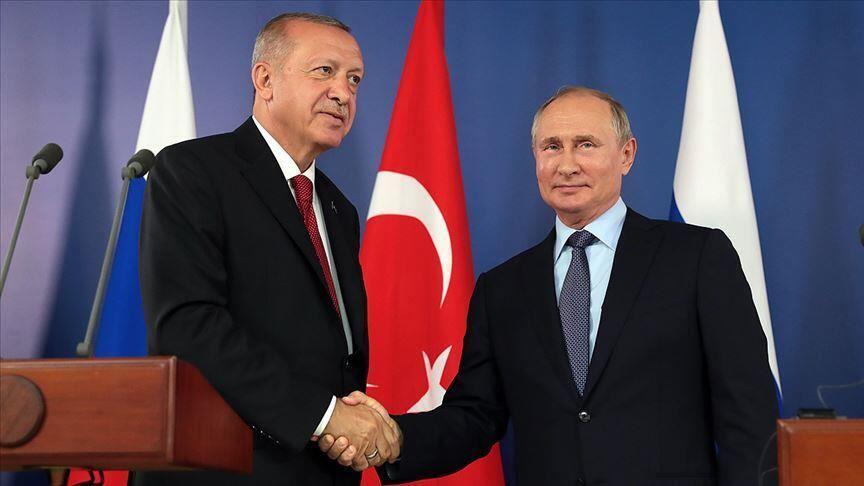 "Oddly enough I was the only independent thinking, alternative blogger that saw this cooperation as a possibility.

I’m preferring diplomacy to blood letting. Turkey and Russia cooperating keeps NATO off kilter on one hand, while balancing international/global affairs on the other"

On the night of November 9–10, following 45 days of fierce fighting, the second Karabakh war ended with the signing of a five-point declaration between Azerbaijan and Armenia, under mediation from Russia. Azerbaijan recaptured five districts in Karabakh, as well as the Lachin Corridor connecting this region to Armenia, with Russian peacekeepers set to patrol the area for at least five years. At the same time, Turkey reached a separate agreement to establish a military observation point (similar to those it has in northern Syria) on Azerbaijan’s reoccupied territory (Iletisim.gov.tr, November 10; see EDM, November 12).

By December 2016, the dynamics of the dialogue between Ankara and Moscow were transformed further with the establishment of the so-called Astana Process for addressing the war in Syria. Russia’s recognition and acknowledgement of Turkey (along with Iran) as a counterpart and legitimate actor in Syria

The subsequent (October 22, 2019) Russian-Turkish Sochi Agreement on northeastern Syria reaffirmed the value of bilateral negotiations to both sides and reinforced trust between them.

Regarding Libya “Nevertheless, the two countries sought several times to reach an accord on Libya, including at the start of 2020 (see EDM, January 30, 2020)”

Now that Ankara has been pursuing a tangibly more intensive level of relations with strategic partners in the post-Soviet space, Russia and Turkey have sensed the need to develop a new joint cooperation platform. During the recent spate of violence in Karabakh, discussions developed about possibly changing the peace process for the conflict, for nearly 30 years dominated by the Organization for Security and Cooperation in Europe’s (OSCE) Minsk Group, co-chaired by France, Russia and the United States. Namely, Azerbaijan proposed Turkey become a new co-chair. In turn, Turkey suggested the renewal of meetings within the Astana format (Russia, Turkey, Iran) to discuss Karabakh in addition to creating a new quadrilateral negotiation process that would bring together Turkey, Russia, Armenia and Azerbaijan. In expressing support for this latter framework, Azerbaijani President Ilham Aliyev emphasized that peace and stability in the region cannot exist without Turkey (Milliyet, October 15).
For Turkey, this deeper involvement finally invites the country into a region it has long considered of crucial national interest. Whereas, two main factors reinforce this incentive for Russia. First, as Putin emphasized, Turkey conducts an independent foreign policy despite the fact that it is a North Atlantic Treaty Organization (NATO) ally. Second, Russia has not been able to build similarly pragmatic relations with the two other post-Soviet republics in the Black Sea region, Georgia and Ukraine, where Western-oriented governments came to power in so-called “color revolutions.” Consequently, Moscow is much more interested in encouraging Turkish buy-in on Russian-offered solutions to regional problems. Thus, Ankara’s participation in talks on Karabakh fits Moscow’s broader interests; for example, Turkish involvement is more likely to pressure Armenia into staying within the Russian orbit (and under Russia’s ostensible protection) over the long term. And that model, Russia surely hopes, can then be reapplied elsewhere in the region.

Related reading
Posted by Penny at 9:17 AM