Pashinyan is in trouble. Clearly. And he has been since the settling of the Nagorno Karabakh fighting.  But, who are the players behind this trouble?

First up : November 19/20  Turkey and Russia Transforming Relations? Biden's "ancien regime" Will Be A War Maker, Both Foreign and Domestic

Biden will appease the self identified left and their idea of social justice by waging war on new people in new places, for all the “right” reasons...

All the memes that appeal to the ‘do righters’ who believe themselves to be bringers of global justice when all these goals serve only to advance the multinational corporate ability to extort massively from the people at enormous expense, on many levels, to humanity.

As was stated then by yours truly..

The Future of Armenia- is not for Armenia to decide

Have no fear the EU is going to keep it’s foot in the door and continue to force Armenian’s to bend to the will of the globalist capitalist western 5 + 1 eyes agenda. Remember that France’s Macron simply  couldn’t keep his mouth shut as Russia negotiated a settlement in this locale.? France and the US were extremely displeased with the agreement made between Russia, Armenia and Azerbaijan.

No one could have thought the settlement, which had the support of Iran and Turkey as well was, going to be allowed to stand without being challenged?

Yah, France. The leadership of that nation has no desire for peace in NK.  None. Nadda, Zéro  Zéro . Still awaiting the answer to the question - Why has France been getting a free pass in the media, alt and msm, for it's heavy handed and obvious involvement in Nagarno Karabakh?

By the way, no one ever stepped forward to explain why it was France was getting a free pass. Alt media? Anti imperial media? Oh, the silence was deafening.

PanARMENIAN.Net - The General Staff of the Armenian Army issued a fresh statement on Thursday, Febriary 25, maintaining that their previous statement demanding Prime Minister Nikol Pashinyan's resignation was not pressured by any person or power.

The statement "is the clear conviction and position of the generals and officers, with a single goal of serving the salvation of the Homeland at this crucial moment. We confirm our position once again," the General Staff said.

The country is facing a serious political crisis after the top military brass demanded Pashinyan's resignation. The PM, however, claims he had already dismissed the chief of the Army General Staff. The parliamentary opposition has already weighed in on the matter, urging against bloodshed and calling for a peaceful transition of power. 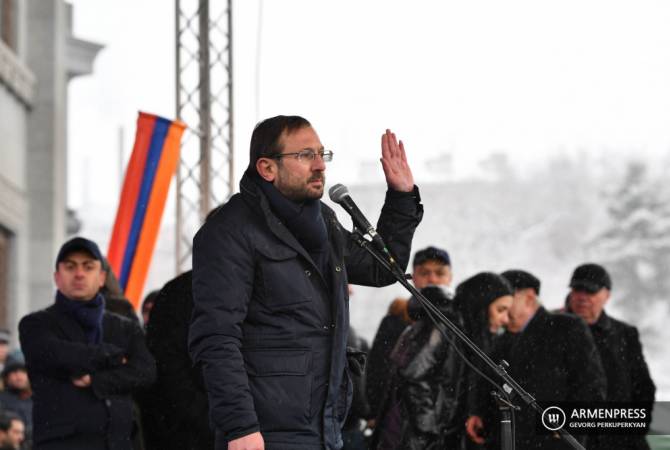 The ARF member Gegham Manukyan, one of the coordinators of the movement, said they will not give in to provocations and urged law enforcement agencies to thwart any such attempts.

Manukyan said the law enforcement agencies ought to join the military’s calls for Pashinyan’s resignation.

The ARF member Artsvik Minasyan added that they support the Armenian military.

Meanwhile, PM Nikol Pashinyan has called on his supporters to rally in the Republic Square after the Armed Forces General Staff issued a statement calling for his resignation. Pashinyan said this statement amounts to an attempted coup.

Homeland Salvation Movement... Sounds like a pro west/ pro NATO party. If you think about it this is a party that represents more war. "Homeland Salvation" And war doesn't benefit the Armenian people.

Turkey on Thursday “strongly condemned” what it described as an attempted coup in neighboring Armenia, where Prime Minister Nikol Pashinyan was facing calls by the military’s top brass to resign.

Mevlüt Çavuşoğlu told a news conference in Budapest. “We are absolutely against coups and coup attempts anywhere in the world.

General condemnation? Better to dance with the devil you know? Or a clue as to who is fomenting the coup. (The US/EU/Israel/PKK alliance) Turkey has everything to lose if the aforementioned alliance tosses Pashinyan. Pashinyan has been a tool and a fool, but, he's been subdued quite a bit. Weakened, one would easily say.

Armenian Prime Minister Nikol Pashinyan signed a decree today to create a working group tasked with reforming the military and to deepen security ties with Russia.

“We intend to establish even closer cooperation with our number one security partner, Russia. We are confident that as a result of this process, this cooperation will become more effective in the fields of security, military and military-technical cooperation," Pashinyan said at today’s government cabinet session.

Is this move by Pashinyan yet another suggestion to us, a clue, of who is fomenting the coup?

One final item of interest, if one visits the NED site- And checks Armenia in 2019- a 404 error message is returned. However.. If you get the cached page it’s a very different reality. A sampling below and yes there is more at the link

The Armenian Institute of International and Security Affairs

To promote informed public debate about Armenian foreign and security policy. The institute will produce analytical articles, host roundtable discussions, conduct trainings, and organize forums designed to promote development of a united policy agenda anchored in shared democratic values. The project will increase the availability of objective information on the importance of Euro-Atlantic integration and the interrelationship of domestic and foreign policy.

To provide news and analysis of Armenian current events on its website. The organization will produce daily news and analysis, including video reporting, as well as talk shows and in-depth video investigations on political and human rights topics. The grantee will provide analysis of key political developments, reforms, and problems facing the new government.
EVN News Foundation

To promote debate and discussion on current events in Armenia. The organization will publish articles on recent events and on the key social and political issues in the country. Its Armenian- and English-language coverage will provide domestic audience and international observers with objective analysis of the challenges Armenia faces in its democratic development.

To promote debate and discussion on current events in Armenia. The organization will publish articles on recent events and on the key social and political issues in the country. Its Armenian- and English-language coverage will provide the domestic audience and international observers with objective analysis of the challenges Armenia faces in its democratic development.

Will the coup succeed?