Egypt and the players: US, Israel, Elbaradei, Muslim Brotherhood and the Suez Canal

Egypt.I have been following the news. Is this a legit uprising? Is it not?
One thought that had crossed my mind watching these protests, was or had some kind of state sponsored pressure campaign, been 'encouraged'? But,got out of control?
Had a certain country, who shall remain nameless, been up to tricks? Tricks, that went a little to far, and tapped into a very large vein of anger, resentment and hostility?

Thinking back to the arrest of Israeli spies in Egypt.
(linked to spy cells in Lebanon and Syria) Then the church bombing

A brief aside, quoting from the JP article


" The crime lab investigation found the explosives used were locally made and were filled with nails and ball bearings to maximize the number of casualties."


Reminds one of the Russian airport bombing, but, I digress..

Mubarek had been critical of Israel regarding the Palestinian "peace talks"
Was it all politics on his part? To give himself some legitimacy in Egypt? Or was he being sincere? Mubarek has had a rather heavy handed approach to Gaza, until recently, when he let some aid enter Gaza ... Did this annoy Israel and the US?

I don't know if this matters so much at this point. The who's, how's and the why's that brought this on.

However the situation in Egypt resolves itself, the West, especially the US and Israel, will try to manipulate the situation to the advantage of themselves and their interests.
Will they be successful?
I guess, only time will tell.

What do we have today in the news?

The United States has called for an "orderly transition" to a new government in Egypt but stopped short of demanding President Hosni Mubarak step down as protests engulf his regime.

Mubarek has shuffled some people around, but, nothing substantive. I guess this is managing a transition? But, not quite enough window dressing to make the change look updated.
Hilary Clinton thinks he needs to go further, but, there is no talk of Mubarek stepping down. No cutting off of the aid.

"There is no discussion as of this time about cutting off any aid," Clinton said.


If the US wanted Mubarek out, aid would be cut off.
(As was recently threatened in Haiti)

And, what about ElBaradei?

He is talking the talk. But, will he walk the walk, should he get the position to do so?


"The American government cannot ask the Egyptian people to believe that a dictator who has been in power for 30 years will be the one to implement democracy," the former head of the UN's International Atomic Energy Agency said.
"You are losing credibility by the day. On one hand, you're talking about democracy, rule of law and human rights, and on the other hand, you're lending still your support to a dictator that continues to oppress his people. You have to stop the life support to the dictator."

This fellow is, I am certain, well connected to the Global elite crowd. Therefore, I have some serious doubts about how he will perform in Egypt and just who he will perform for.

Then there is the Muslim Brotherhood. This group seems to cause the West concern.


FOR the US and Israel, the alarming spectre raised by the uprising in Egypt is the prospect of the Muslim Brotherhood seizing power and forming a hostile Islamist regime in a country that has for decades been a bastion of US and Western support.
This scenario has been successfully exploited by the Egyptian government for 30 years to maintain its emergency rule and justify the brutal crushing of opponents and has been cited by the US to rationalise its backing of President Hosni Mubarak's regime.


They have recently thrown their support behind ElBaradei.

On Sunday it upped the ante by announcing its support for Nobel Peace Prize laureate and opposition leader Mohammed ElBaradei as transitional president if Mubarak is forced aside.

They have also taken their support further, as reported here, by offering to enter into discussions with the army.

Egypt's Muslim Brotherhood is seeking to form a broad political committee with Mohamed ElBaradei to talk to the army, a senior member of the opposition group said on Monday.

Then of course, there is Israel.

The latest news stories have Israel seeking support for Mubarek and a request to curb criticism of the leader.

Israel has told its diplomats in the United States, Europe and elsewhere to encourage their host nations to support the regime of Egyptian President Hosni Mubarak, daily Haaretz reported Monday.
The newspaper said Israel's foreign ministry told its diplomats to stress that it is in "the interest of the West" and of "the entire Middle East to maintain the stability of the regime in Egypt."
"We must therefore curb public criticism against President Hosni Mubarak," the message sent at the end of last week said, according to Haaretz.

Israel seeking support for Mubarek, should play out really well in Egypt...(sarcasm)
Because ,Without Egypt, Israel will be left with no friends in Mideast

Perhaps Israel should have played nicer.
I mean, it is really not nice to drop white phosphorous one your neighbours. 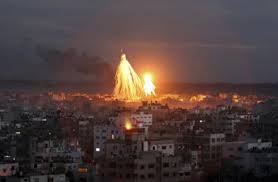 And, the Suez Canal
A million questions with how transport through the canal could be affected?

I guess we will all just watch as the situation unfolds
Posted by Penny at 7:36 AM