A new 'face' for the rebranded Syrian revolution: An inclusive terrorist government

The sales campaign has failed. Syria's so called revolution is in desperate need of a REBRAND.
Hillary Clinton is going to make dam sure that happens. And, she has been busy. Very, very busy.
One certainty when Hillary "get's busy". People will die. Lots of them.
The latest: Ms. Clinton is “dismissing” the Syrian National Council
Which was never Syrian or national or even a council.
It was the Muslim Brotherhood/Western stooges dressed up by spin doctors sold as an "opposition' via the NATO media 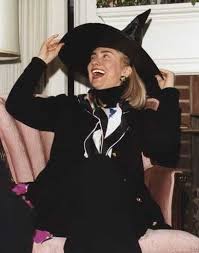 Late for Halloween, but always fitting.The wicked witch of the West

Clap your hands for the new improved/rebranded Syrian opposition


The State Department has been heavily involved in crafting the new council as part of its effort oust Syrian President Bashar al-Assad and build a more viable and unified opposition. In September, for instance, Secretary of State Hillary Clinton met with a group of Syrian activists who were flown in to New York for a high-level meeting that has not been reported until now.

A group of Syrian activists? Are they Syrians? Or just activists?
"Flown into New York", from where? Turkey? Libya? Tunisia? Anyone's guess.

Ah, yes... Hilary meeting with so called dissidents. Same old/same old
This is all very formulaic.

The US even has their branding all figured out.  The Riad Seif plan.

U.S. officials and opposition leaders are calling the initiative the "Riad Seif plan," named after the former Syrian parliamentarian and dissident who was imprisoned after he signed the Damascus Declaration on respect for Syrians' human rights in 2005. He was released in 2011, beaten up by a Shabiha gang in Noember 2011, and finally allowed to leave Syria in June 2012.

Seif is central to the formation of the new council and is seen as a figure with broad credibility with both the internal and external Syrian opposition.


Seif is a variation of the hero/anti -hero/martyr most often presented in fictional or alleged real life narratives
( Think of the hero's journey? Lord of the Rings- Star Wars- various religious books.)
Where have we seen the hero/martyr in previous 'revolutions'
Let me recall..... Oh, yah!
Tunisia and Egypt-

All  of these individuals were/are going to be  presented as hero/anti-hero or martyr’s, complete with mythologies surrounding them. Stories of struggle and sacrifice. Ultimate or otherwise.
Both, the Tunisian and Egyptian narratives were questionable. Were they based in fact? Or fantasy? What were the circumstances surrounding these individuals? What had really happened to these individuals? Did these individuals actually live and die, as claimed? Of course there is no way of knowing. Not that reality makes a difference when one is spinning a narrative.Truth and facts just clutter the story. And it is the story that holds the power,  the heroic presentation, the life and death struggle. All presented via  social media.

Infecting as many individuals with the meme is the goal.

Keeping all that in mind, it appears as if the Syrians are now going to get a ‘face’ for the revolution.


From the Telegraph :US withdraws support for Syrian “opposition” What a lame headline.
A government for Syria run by terrorists, same as in Libya.
BTW: the link to the Telegraph is now a 404 error? Even via google


The US wants the opposition to rally wider support and resist attempts by extremists to hijack the revolution against the Assad regime.


That sounds good, doesn’t it? Rally wider support, be more inclusive and resist attempts by extremists to hijack the revolution.
PROBLEM?
If the “opposition” does rally wider support it will inevitably take in the extremists
That would be unavoidable! Therefore, what Hilary the war monger is working towards is placing NATO's extremists into the ‘opposition’ to ensure a Libya style government and guarantee an unstable Syria

The further statements make that absolutely clear despite the Telegraph twist

Of course, those on the front lines "fighting and dying" are the NATO merc terrorists.
They are the individuals who have been killing ordinary Syrians and laying siege to countless towns and cities
Destroying water mains, blowing up pipelines, derailing trains etc., And most of them are not Syrians!
Hillary wants the NATO merc terrorists from the world over governing Syria.
Her concept of a Syrian government would include Libyans, Pakistanis, Chechnyans, Turks, Tunisians, Brits, French etc.  How exactly does this serve the Syrian people? Clearly it does not!

‘And there needs to be an opposition leadership structure that is dedicated to representing and protecting all Syrians."

Even if that opposition is full of non-Syrians?
Since the SNC and the rebels are both viewed with suspicion and fear by the Syrian people,  we know with certainty, that an inclusive opposition is not being put in place to "protect" all Syrians.


The only sensible conclusion that can be drawn from Hilary’s move to dismiss the SNC and include the mercs is that she is creating a terrorist government whose role it will be to guarantee misery for the Syrian people, continue fomenting sectarian strife and destroy the cohesive and inclusive society that Syria had until NATO stepped in.

Speaking of those fighting and dying on the frontlines in Syria- Hillary's heroic 'fighters' who should help form an inclusive government  ?? Priest's murder in Syria impacts Islanders

That is Prince Edward Island, Charlottetown.

Rev. Stephen Allen, parish priest at Ss. Peter & Paul, says his parishioners were rocked by the news of the torture and murder of Rev. Fadi Haddad in Syria last week.
The torture and murder last week of Rev. Fadi Haddad has rocked the P.E.I. community.
As parish priest of St. Elias Church in Qatana, Syria, Haddad was negotiating the release of a parishioner, a local doctor.
The doctor's sister-in-law lives in P.E.I. and prayers continue for his safe return, said Rev. Stephen Allen, parish priest at Ss. Peter & Paul.
Haddad had successfully negotiated a lower ransom amount for the abducted man, and when he and the father of the Charlottetown parishioner went to pay the ransom for the doctor's release, they were both taken hostage. The next day the murdered, mutilated and reportedly tortured body of Haddad was found. His funeral was held last Thursday.
The condition and whereabouts of the remaining two hostages is unknown, Allen said Monday.
Ss. Peter & Paul Antiochian Orthodox Church held a memorial service for Haddad on Sunday. He has been proclaimed a martyr of reconciliation and harmony by the Greek Orthodox Patriarchate of Antioch.  A number of Islanders have family and friends in Qatana and knew Haddad as a kind and loving priest, said Allen.
Posted by Penny at 5:20 PM