In the village of Rabatke, the house of Oshana Samuel is now occupied by PKK members.

In Upper Hezani PKK members have occupied a house belonging to the cousin of the wife of Emmanuel Khoshaba Youkhana, the leader of the Dwekh Nawsha Assyrian fighting force. The village residents have heard rumors that the PKK plans to build a hospital in Upper Hezani.

In Lower Hezani, PKK members have occupied a house near the school which has 177 students. The house belongs to Mr. Youkhana. The school building houses both the Hezani Primary School and the Merga Secondary School. The primary school has 133 students, the secondary school has 44. The mayor of Lower Hezani spoke with the female commander of the PKK militia, which is comprised mostly of women, and expressed concern for the safety of the students. The commander dismissed his concerns and said nothing will happen. There are 10 PKK fighters in the village with another 100 camped in a nearby valley, waiting to come to this and other villages.

When asked by an employee of the school why the PKK is occupying the village, a PKK fighter said "you [Assyrians] have the opportunity to leave the country, why are you staying here?"

The PKK, occupying the homes of others, pretty much tells them to to leave their home & country so these terrorists can just take it over-

The PKK is occupying and hoping to ethnically cleanse Assyrians in the Nahla Valley-
Look at the map! Note the location 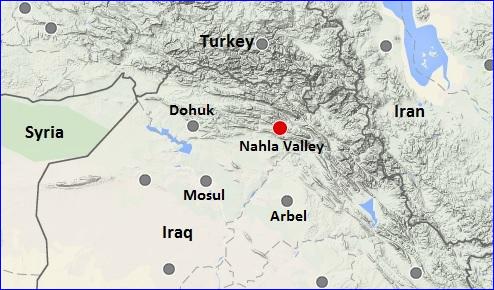 The Sunni Muslim Kurds have killed the Assyrian christians previously

As they collude to rewrite history with their Israeli besties

Look at the  map above again?


On Saturday, the Hurriyet newspaper reported Turkey would have a permanent military base near the Bashiqah region of the Iraqi province of Mosul, where Turkish troops are training Iraqi Kurdish fighters, also known as Peshmerga


"There are no agreements with Turkey on military bases in Iraqi Kurdistan. The only accord was concluded with the international coalition of 62 countries, which includes Turkey, but it does not provide for existence of military bases, only the training of Kurdish forces fighting terrorism and air support," Saadi Ahmed Pira, a social democratic Iraqi-Kurdish political party representative, said in a telephone conversation.

No base. No agreement for a base. Why then did Turkish troops enter the area?
Look at the map! Recall me informing readers here some time ago of the discord and competition between Barzani & the PKK? If you don't recall my mention of this fact,  re-read this post:


It appears that the PKK is the 'unifying' force amongst the Kurds- I didn't say the agreed upon unifying force- Rather, the unifying FORCE, needed by NATO to create a Kurdish 'state' Whether or not the Kurdish population itself really wants one.


It seems plausible that the PKK is set to launch an attack on the Barzani government in Iraq's Kurdistan, because the Kurds are not one people, they are not unified, but will be forced by a terrorist organization propped up by NATO (PKK) to coalesce into a NATO terror state of no benefit to anyone other then Israel and the NATO global tyranny. Turkish troops may well be there to assist the Peshmerga as claimed- Barzani and Erdogan have good relations

The other explanation for the presence of Turkish troops near Mosul, considering the positioning of the PKK, is to surround the PKK/remove the threat before they can wreak havoc in Turkey.

The rubbish about Turkey annexing Mosul- is just that. Rubbish. Turkey is in no position to annex territory- period.  I simply cannot believe the garbage in the alt media at this time! It's a complicated situation- and this simplistic blaming Turkey for the sun not rising is little more then NATO/Israeli propaganda being regurgitated.
Reread the disinfo presented in yesterday's post by Ribal al Assad: Always Suspicious No Good Organizations Advancing Questionable Narratives-

I hope this is incorrect reporting? But, if not, recall I mentioned well over a year ago that Kurdistan (2nd Israel) would be NATO's new southern flank?

Speaking of the PKK and their abuses: Reports of abuses by Iraqi, Kurdish forces against Sunni Arabs increasing, UN rights office says

“Reports indicate that Iraqi security forces, Kurdish security forces and their respective affiliated militias have been responsible for looting and destruction of property belonging to the Sunni Arab communities, forced evictions, abductions, illegal detention and, in some cases, extra-judicial killings,” Office of the UN High Commissioner for Human Rights (OHCHR) spokesperson Cécile Pouilly told a news briefing in Geneva.

I, for one, am less then shocked! Particularly since I've written a whole bunch of posts on this topic- Unlike the numerous disinfo sites around? All of them, amazingly,  never once reporting on the abundant abuses the Kurdish militias have dished out on other Kurds, Arabs & Christian