It's all possible! Trying to get an understanding of what exactly is going on between the Gulf Nations- The US looks to be involved possibly having instigated the crisis. Related to Iran? Is the US ensuring the ducks are all lined up before a move against Iran. The usual appeasing of Israel? Will the emir have to be removed to ensure compliance?

What about Qatar's partnership with Turkey? Turkey has a military base in Qatar.

KazJune 5, 2017 at 3:13 PM
Another thing to add is that Turkey's most important partner in the region is Qatar. Qatar is on the same page as Turkey so far I have witnessed. Further more Turkey has a military base in Qatar.


“The negative side of this crisis for Turkey is that Ankara will fail to act independently in the region, as it was during President Obama’s term in office,” he added. “In other words, Turkey will have to adhere to the NATO policy in the region.”

And the light is burning bright- The US is killing many birds with one stone. Using Qatar as a means of exerting pressure on Turkey. Forcing them back to the fold.


"We certainly would encourage the parties to sit down together and address these differences, and we — if there's any role that we can play in terms of helping them address those, we think it is important that the [Gulf Cooperation Council] remain unified," Tillerson told reporters

The US is most definitely not an uninterested player:

Qatar is home to the sprawling al-Udeid Air Base, which is home to the forward headquarters of the U.S. military's Central Command. It wasn't clear if the decision would affect American military operations. Central Command officials and the Pentagon did not immediately respond to a request for comment.

The diplomatic crisis that enveloped the Gulf region on Monday pits some of the world’s richest nations in a power struggle over regional dominance. An alliance of four Arab nations led by Saudi Arabia is seeking to isolate tiny Qatar over its ties to Iran -- the Saudis’ chief foe -- as well as Qatari support for Islamist movements they oppose.

While those differences have sparked earlier standoffs, the unprecedented steps taken this time round leave the nations’ leaders with limited room for maneuver. Here, analysts comment on what’s behind the moves and what might happen next.

The aim is to get Qatar to take “a harder line towards Iran, renounce the Muslim Brotherhood” and change the editorial policy of the Al-Jazeera media network, she says.

A Qatari compromise “would represent a huge loss of face” for ruler Sheikh Tamim bin Hamad Al Thani. “He’ll be quite reluctant to make a public denouncement of those positions.”

Saudi Arabia and the U.A.E. were emboldened by President Trump’s recent visit to Riyadh. Still, “it’s not in the U.S.’s interest to see the GCC sort of unravel,” according to Wood. “That could potentially push the U.S. to step in to act as intermediary between the countries.”

Good thing the US has a big military base in Qatar. 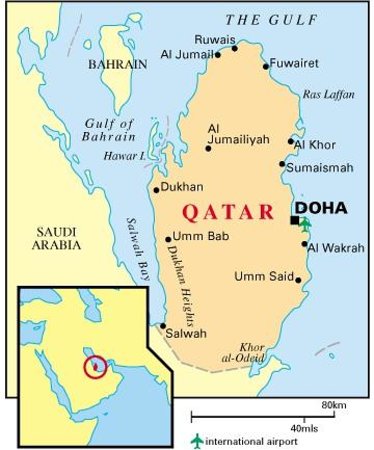 
“The emerging anti-Qatar coalition is unlikely to back down without some change in the Qatari government’s orientation and policies, including the expulsion of Qatar-based Hamas and Taliban leaders, and wanted Egyptian clerics,” he says.

Initially, Qatar is likely to attempt to create the illusion it’s complying -- without fully doing so, according to Abi Ali. And then in three to six months, it will probably “agree to the demands of its neighbors, leading Arab states to halt their escalation.”

If Qatar fails to comply, there’s the risk of sanctions or an effort to “replace the emir, with a view to bringing Qatar under the same level of Saudi influence as Bahrain.”

Yup, that is overthrow the leadership. As stated it is very convenient the US has a sprawling military base located in Qatar should just such an overthrow be necessary.

A decision by key members of Qatar’s most powerful families to abandon the emir and side with Saudi Arabia and the U.A.E. is far more likely than military escalation.

The average Qatari citizen will feel the impact pretty soon as Saudi Arabia has blocked the land border through which Qatar imports food.
“Inflation will quickly accelerate,” he says, and there “will be chaos in Doha airport,” possibly triggering street protests and putting “immense pressure on the government.”
“Qatar has no other choice but to back down, the survival of Qatar as a sovereign state is at stake.”

“Qatar doesn’t have much choice but to shift policies,” as the Gulf Cooperation Council “is its natural habitat, and it cannot survive outside it for long,” he says.
“Iran cannot replace Saudi Arabia for Qatar -- so there will be some compromises and reconsideration of positions.”


“The endgame is to get Qatar to change its policies, and the Saudis and Emiratis can be expected to up their game until that happens,” she says.

There’s a history of “active Saudi and Emirati support for leadership change in Qatar.”  That “would be a last resort” as it is risky to destabilize a Gulf Cooperation Council Council state. “But it can’t be ruled out.”
“The Qataris are going to need to convince the Emiratis and the Saudis that they’re not giving support to their domestic opposition.”
The U.S. would support the pressure on Qatar since a number of its policies “have been troublesome for a long time,” she says. “Any positive change in Qatar’s policies toward Hamas, terrorist financiers, and other destabilizing forces, would be generally viewed as a good thing from the U.S. perspective.”


Qatar is definitely having the thumb screws applied- It won't take long to cut Qatar off and make life miserable for it's inhabitants via this embargo- Can't rule out a regime change operation.