It seems obvious the US Navy has some problems. 2nd Destroyer Collision in about 2 Months!
I have just posted the news that the Captain and senior officers of the USS Fitzgerald were guilty and relieved of duties-  An expected outcome.

Gordon McPhailAugust 20, 2017 at 11:25 PM
I think this is more non-sence to bulk up the airwaves with to keep people from seeing what is actually happening . Just a thought.. By the way What is it that keeps American Destroyers from seeing and avoiding 30,000 tonne freighters... http://tass.com/defense/961126

WASHINGTON, August 21. /TASS/. Five people were injured and 10 reported missing after a US Navy guided-missile destroyer collided with a merchant vessel early on Monday to the east of Singapore, the Navy 7th Fleet said in its statement.

According to the statement the USS John S. McCain "was transiting to a routine port visit in Singapore," when it collided with the merchant vessel Alnic MC east of the Straits of Malacca and Singapore.


American, Singaporean and Malaysian armed forces on Monday are searching for 10 U.S. sailors missing after an early-morning collision between a Navy destroyer and a tanker near Singapore--the second collision involving a Navy ship in the Asia-Pacific region in two months.

"There are currently 10 Sailors missing and five injured," the Navy 7th Fleet reported. "The ship is currently sailing under its own power and heading to port."

Alnic MC is a 600-foot oil and chemical tanker. 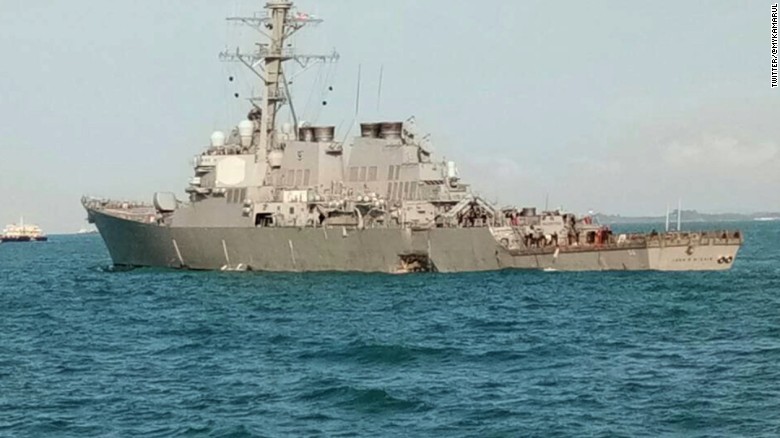