gallier2February 4, 2019 at 4:52 AM
Vincent Lapierre was attacked last Saturday in Toulouse by antifa and black blocks. He and his cameraman was quickly exfiltred thanks to very reactive yellow vests. It looks like antifa and black blocks activity is increasing. Some say, that that is a good sign that the police is overwhelmed and have to use more and more dirty tricks. Antifa and black blocks are so obvious in working for the gvnmt that even the dumbest now catches on what their real nature is.


During Act XII in Toulouse, several people were attacked by the antifas, including Vincent Lapierre and his cameraman, Media for All journalists. However, these show regularly the reality of the events and give the possibility to Yellow Vests to express themselves freely.


Antifa (antifascist) is so blatantly pro fascist. Pro government and big business.
One simply has to accept that the name chosen to represent this group of fascist thugs was done to deceive the naive. The gullible. The masses.

This is Antifa in Hamilton, Ontario, Canada: 2018

Going on a rampage through Locke Street- Smashing windows, vandalizing everything in sight.
Largely independent places of business were targeted. Why?
Are there no corporate behemoths in Hamilton? Why sure there are! 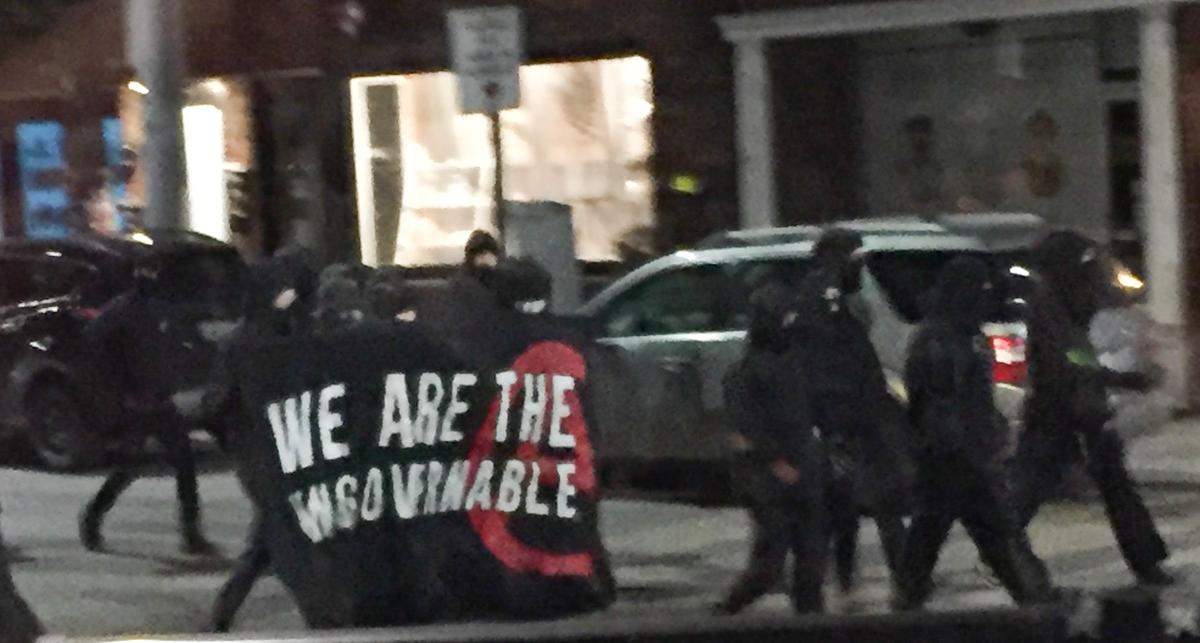 A lineup of customers at Donut Monster stretched around the corner at Locke and Charlton streets, where the new café's windows were among those boarded up after being shattered by rocks thrown by members of a group numbering about 30 Saturday night, dressed in black brandishing a banner that read: "We Are the Ungovernables."

Hamilton police said damage to shops, cars, and homes in the area totalled about $100,000, and no injuries were reported.
Police are investigating a possible anarchist group link to the vandalism that began just after 10 p.m., that Mayor Fred Eisenberger called "random and senseless."

Moreover, some tweeted, corporate symbols, often the target of anarchist protest, were not attacked on Locke, but rather small businesses.

Customers in some restaurants hid under tables in reaction to the sounds of glass shattering and firecrackers banging.
Bitten on Locke co-owner Rebecca Tomasic had been locking up the shop for the night when she saw the mob approach.
She ran to her car parked across the street and locked herself inside and saw someone in the marching group throw a large rock through her store window.
"It was terrifying," she said shortly afterwards.
Carmela Oliverio sat with friends inside Mattson and Co. restaurant on Locke and Alexander Street, when she heard fireworks and then watched as members of the mob threw eggs at their window.

Update on charges in that incident

At a recent Yellow Vest Protests in Hamilton, Antifa showed up to attack protestors

Pay particular attention to the way CBC reported on, or should I say, didn't report on this story?


"Police say the man was holding a stick"

Does one get charged with assault for merely holding a stick?


A group of people wearing yellow vests were picketing in front of Hamilton city hall at 11 a.m. Saturday when a group of counter-protesters arrived. There was a "verbal exchange" that escalated to physical violence in the middle of Main Street, police say.


So, Yellow Vest protestors were protesting and Antifa (unnamed- free pass from media, always) showed up to instigate trouble. Intentionally? So it would appear!


A 25-year-old man was charged with assault with a weapon, ( a little more then CBC's "holding a stick" claim) possession of a prohibited weapon (a knife of some sort?) and causing a disturbance. He was released on a promise to appear in court.
The man was not part of the yellow vest group, says Staff Sgt. Michelle Wiley of Hamilton Police Service. The weapon involved was a stick, she says.
One person received minor injuries and no one was taken to hospital.

And then the CBC includes a smear of the entire protest...by using a guilt by association tactic.
Standard propaganda, really.

The yellow vest concept started in France, where people first donned the vests to protest a fuel tax increase.

Was the fellow charged just "holding a stick"? Come on CBC!
Gotta watch out for that spin!