Missile Launches, G-20 fall-out, Super Base construction in Guam, the US moves on China

What has been going on lately?
We'll connect a bunch of dots. Are they related? Are they not? Time will tell, as always.
We have a missile off the coast of California, covered wonderfully by APeasant here.
The missile launch is being blamed on China.

We have had the failed G-20 talks.
The western media is attempting to blame China for this failure.

When in fact the blame for the economic mess the globe finds itself in sits squarely on the shoulders of GLOBALIZATION. Globalization is the most advantageous to one entity and one entity only. That is banking. Then corporations fall in lock step. Globalization does not serve the 'unwashed masses' The media fails to speak of this, ever.

The US has been the main driver of globalization, so as it's locomotive, the engine that has driven the move to globalization. it bears the blame for the global mess. Through the fraudulent mortgage backed securities, which the US allowed, the whole global house of cards has fallen.

In the eyes of policymakers in many developing countries, U.S. primacy and credibility have been eroded by the global financial crisis, which had its origins in the U.S. subprime mortgage meltdown.

The ultra-loose monetary and fiscal policies that the United States has adopted in response is testing faith in the dollar to destruction -- and not just among the likes of China and Russia.

No less a figure than World Bank President Robert Zoellick, himself a former U.S. Treasury official, said last week it was time to start thinking about building a new monetary system.

There has been more then thinking going on, I covered that here.

Bankers, like the scourge of bed bugs, are moving on....

Aside from all the financial shenanigans of the banks. I want to get back to China.
I am of the opinion the missile launch had nothing to do with China.
But, China makes a convenient scapegoat for a country hell bent on war with and balkanization of China. That country would be the US. The missile launch would be a handy-dandy diversionary false flag.

So I am going to take you back to an interesting news story.. back almost a month ago, to October 25/2010.

But first..... a map!
Always good to help understand where in the world, geographically speaking, all these happenings are taking place. 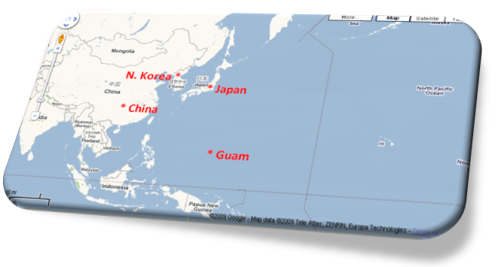 US is building an £8 billion super military base on the Pacific island of Guam in an attempt to contain China's military build-up.

They are not thinking about building, they are building right now as I type this. And they have been for sometime. The inhabitants of Guam are less then happy, for a number of reasons, but no matter to the US they are infinitely more concerned with containing China.

The expansion will include a dock for a nuclear-powered aircraft carrier, a missile defence system, live-fire training sites and the expansion of the island's airbase. It will be the largest investment in a military base in the western Pacific since the Second World War, and the biggest spend on naval infrastructure in decades.

And let's talk about the missile briefly, shall we?

The missile off the coast of California. Why would China take such a risk?
Something that would be interpreted as a direct challenge to the US?
Particularly considering China lacks Naval supremecy.

"Experts agree China does not currently have the capability to challenge US supremacy in the Pacific and Indian Ocean. "China has a large appetite", says Carl Ungerer, an analyst at Australian Strategic Policy Institute, "but it hasn't got enough teeth".

As for the concerns of the people...

This (base building) could trigger serious water shortages. The EPA said that dredging the harbour to allow an aircraft carrier to berth would damage 71 acres of pristine coral reefs.

Serious water shortages and the destruction of pristine coral reefs
But that is not all. The US will move forces from Okinawa, where they are really unpopular, to Guam.

The island's population will rise by almost 50 per cent from its current 173,000 at the peak of construction. It will eventually house 19,000 Marines who will be relocated from the Japanese island of Okinawa, where the US force has become unpopular.

That couldn't have anything to do with the fact that the US soldiers are troublemakers and pedophile rapists....???

No really, it couldn't. The fact is the US needs the soldiers in Guam. They really don't care and have never cared about the atrocious behaviour of the soldiers

Guam is not alone in the build-up!

The US is also investing another £126 million on upgrading infrastructure at the British-owned Indian Ocean atoll of Diego Garcia, 700 miles south of Sri Lanka.

With war and super bases comes of course the necessity for a steady supply of oil.
And the US has already got a secure supply for the Guam base.
A very interesting article, but curious in the way it was written- steering well away from the facts into some irrelevant historical references, unless one is promoting a specific agenda?

Guam, US Territory – Businessman Ricky Delgado scored another business coup with the entry of Japanese conglomerate Itochu Petroleum into Ricky’s IP&E or Isla Petroleum and Energy. IP&E is currently one of the major suppliers of petroleum in the island of Guam and Saipan. By the year 2014, when the US military base in Okinawa will be relocated to Guam, IP&E will be the biggest supplier of petroleum for the US Armed Forces

. The Japanese conglomerate bought a 25 percent stake in the company for an undisclosed amount. Jose Ricardo Delgado Jr., Ricky’s namesake and son who runs IP&E, told us the Japanese equity will boost the company’s funding for future expansion plans possibly from the Philippines all the way to Hawaii. Another Guam-based Delgado company IT&E, a telecoms firm, recently obtained an $8 million grant to expand its broadband capabilities which includes the replacement of existing inter-island services and the use of 3G wireless and Wi-Max technology within the CNMI (Commonwealth of the Northern Mariana Islands) and Guam.

Oil and Telecom for the military bases. Nice.

Who is this Ricky Delgado? This is where the article get's strange.

Ricky Delgado traces his roots to Valladolid, Spain where the Delgado family first started. According to him, their ancestors come from Spanish-Jewish descent, which probably explains some of Ricky’s business skills in identifying business opportunities. The Jewish people are probably among the most resilient of races considering the persecution they received from Valladolid-born Tomas de Torquemada who instituted the persecution of Jews and non-Catholics through the infamous Inquisition, and then later from Adolf Hitler who authored the Holocaust, which systematically purged six million Jews all over Europe.

I also wonder at this sentence from the article linked above-

Who or what is the unmentioned partner?
Posted by Penny at 7:46 AM