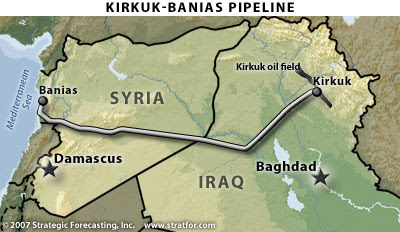 While China is moving west towards the Caspian Sea, Damascus is concurrently moving eastward. Since 2009, Bashar al-Assad has been promoting a "Four Seas Strategy" to turn Damascus into a trade hub among the Black Sea, Mediterranean Sea, Persian Gulf/Arabian Sea and the Caspian Sea.

Aligning Syria with countries that lie on these shores—Turkey, Iran, and Azerbaijan (The Weekly Middle East Reporter, August 1, 2009)—Assad peddled this idea in May 2009 with Turkey, stating that “Once the economic space between Syria, Turkey, Iraq and Iran become integrated, we would link the Mediterranean, Caspian, Black Sea, and the [Persian] Gulf … we aren’t just important in the Middle East…Once we link these four seas, we become the compulsory intersection of the whole world in investment, transport and more.”

He described Syria’s nexus of “a single, larger perimeter [with Turkey, Iran and Russia]…we’re talking about the center of the world” [17]. Syria can thus act as a means of access for EU countries to markets in the Arab world and western Asian countries [18]. Assad discussed this vision with Medvedev in May this year, and in August 2009 he received Iranian supreme leader Ali Khamenei’s blessing when he presented this strategy [19].

To this end, Assad is taking steps to expand the Arab Gas Pipeline (AGP) to pipe gas from Egypt and Iraq via Syria, and connecting with Nabucco pipelines to Turkey onto Europe.

Was Syria setting itself up to be the centre of the universe. The compulsory intersection of the whole world in investment transport and more?

"Assad's enlarged vision of Syria's role as a strategic energy transiting role is to link the nation's oil and gas pipeline network to the Nabucco pipeline that will carry oil from the Caspian Sea to Turkey and on to Europe," Brooks observed.

Is this why Assad has to go? To get a more western compliant government in place?
One that may not be quite so accommodating to China.
It has to be asked.

Additionally:
Rallies were held in support of the Syrian government in a number of Syrian cities

Syrians Rally, This Time in Support of Leader

The largest gathering appeared to be in Damascus, but Syrian state TV showed similar demonstrations in the northern cities of Aleppo and Latakia, Hasaka in the northeast, and the southern city of Daraa.

There are reports of large crowds in Aleppo, Damascus and the southern city of Deraa, where anti-government protests first broke out in March.

The Syrian government has taken journalists and diplomats to the fought-over town of Jisr-al-Shughour. Footage shot under supervision appeared to show shelled buildings, burnt-out cars and a mass grave where bodies were being retrieved.

Interesting, no? The Syrian government is taking journalists to see what there is to see.

And Turkey is hiding the refugees?